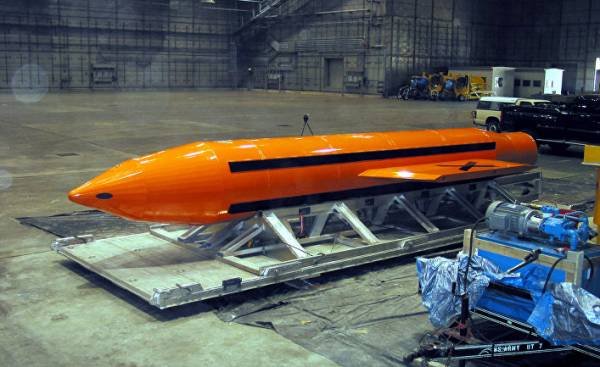 The President was clearly pleased with reports from Afghanistan. “Another successful job. We are very proud of our military. It was a successful mission,” said Donald trump after lunch Thursday at the White house after the meeting with rescuers who were involved two weeks ago following the partial collapse of a bridge in Atlanta.

“Success” was the first use of the most powerful non-nuclear bomb in the U.S. Arsenal. GBU-43/B (Massive Ordnance Air Blast, MOAB), known as the “mother of all bombs”, was dropped on Thursday from the aircraft in the Afghan Nangarhar province East of the capital Kabul. In this region only on Saturday was fatally shot by Sergeant mark de Alencar (Marc de Alencar) from the special forces “Green berets”. In a statement, the headquarters of US armed forces in Kabul does not, however, a reference to the dead soldier, the unit of which is named for the color of hats. Instead, they say that a bomb with the explosive power of eleven tons of TNT, was intended to destroy the system of tunnels armed groups ISIS (an organization banned in Russia — approx. transl.) in the area Agin and is “part of the current effort to destroy in 2017, ISIS-K in Afghanistan.”

ISIS-K is an offshoot of ISIS in Afghanistan and Pakistan, and “To” means “Khorassan” or Chorasan, the Central Asian region of Khorasan, which includes Afghanistan, Iran and the former Soviet republics of Uzbekistan, Tajikistan and Turkmenistan. US troops allegedly took all measures in order to avoid this attack “victims among the civilian population”. Later, the Afghan Ministry of defense reported that during the attacks destroyed 36 ISIS terrorists. Was also destroyed caches and tunnel complex of the Islamists.

The increased military activity of the United States

The use of the bomb, about the destructive power which is in a sparsely populated region not yet reported in detail, occurred at a time of increased military activity of the United States. On April 6, President trump has ordered the application of a limited military strike 60 cruise missiles at the Syrian air base Shirt, which for three days the attack began with the use of poison gas on the village of Khan shaykhun Idlib province in the Northwest of the country. Killing 80 civilians, among them women and children. The regime in Damascus disputes the use of chemical weapons and requires international investigation.

In addition, trump gave the order to send the aircraft carrier “Carl Vinson” to the Korean Peninsula, where a national holiday is preparing a ballistic missile test. At a meeting with Chinese President XI Jinping (Xi Jinping) in Mar-a-Lago in Florida and in a subsequent telephone conversation, trump promised to make concessions in trade in the case that Beijing will help Washington to force Pyongyang to partially terminate the testing of nuclear missiles. Otherwise, according to trump, the US itself will deal with the issue of North Korea.

Asked Thursday at the White house on a question of journalists, whether trump personally ordered the use of bombs, he replied ambiguously. However, in military circles reported that the President gave the Pentagon authority in principle to use all considered necessary conventional means of arms, and so at the request of the White house was unnecessary.

Russia has the “father of all bombs”

However, the use developed in 2003 the “mother of all bombs” in any case, consistent with the concept of a self-confident policy of force and decisive action against Islamist armed groups. During the election campaign trump outlined this concept does not require translation of the wording: “I would bomb the shit out of ISIS.”

Bomb MOAB length is a good nine meters, weighs 300 10 pounds and, as a rule, cleared the C-130 Hercules aircraft. Its a huge explosive force is able to displace from the surface of the earth, forests, or buildings within a radius of 1.5 kilometers, and also destroy underground tunnels and bunkers that the members of ISIL, according to the us military, built in the heart of the operation. In addition, the use of the bomb is given to significant psychological effect.

However, the MOAB bomb though and is the most powerful conventional bomb in the U.S. Arsenal, but it is not all powerful in the world. Russia has a bomb ATBIP (Aviation Thermobaric Bomb of Increased Power), which is a little easier (7 100 lbs), but has twice as large a radius of influence of the blast wave (three kilometers) and supposedly four times more force of the explosion (44 tons TNT). For comparison, the United States dropped in 1945 on Hiroshima atomic bomb had an explosive force of 13 kilotons of TNT. In view of such properties of Russian bombs ATBIP called the “father of all bombs”.