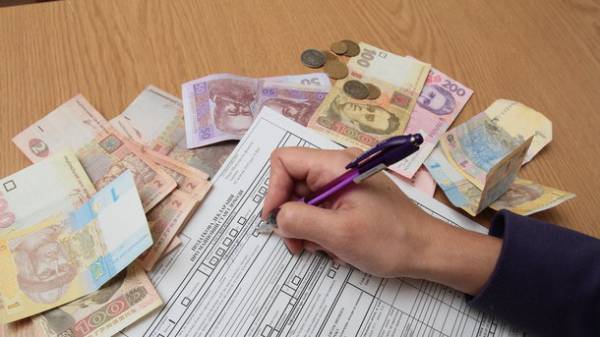 Ukrainians with an “extra” living space after a few months you will have to pay for each square meter in excess of. The tax rate and area of the property, which do not need to pay, defines the local authorities. In 2017 will come the bills for the last year, so the tax is counted based on the minimum wage 1378 hryvnia, and the tax rate will range from 0 to 3% of the minimal salary. The website “Today” found out who and how many will have to pay for their homes in 2017.

To whom and for what pay

At the end of 2015, the MPs have introduced changes to the Tax code (law No. 909), according to which the tax is levied not only residential apartments and houses, but sheds, garages, cellars, summer kitchen, etc. However, most city councils have established a zero tax rate on farm buildings.

For that you will have to pay:

A list of the properties which do not need to pay taxes: 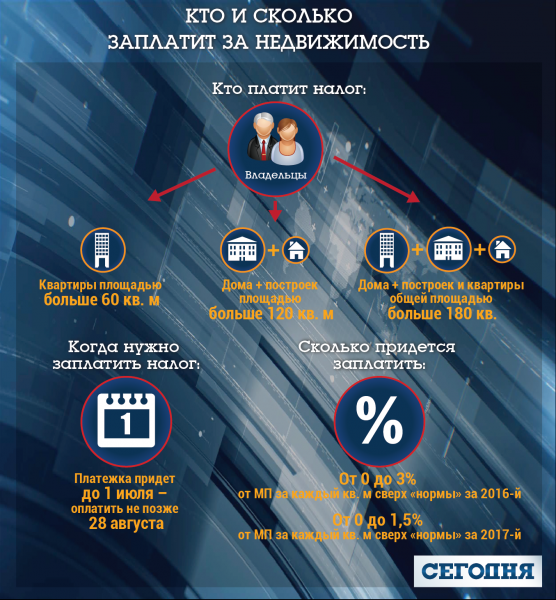 Tax on real estate Supplement local budgets. City councils decide what a dwelling is considered “excess” and what tax to charge. This law establishes, that the estate tax doesn’t need to pay for apartments with an area of less than 60 squares and the house is less than 120 squares. If the family has a house and an apartment, for them is considered “normal” 180 squares. The tax rate for the last year can range from 0 to 3% of the minimal salary, and for 2017 – from 0 to 1.5%. This decision was made due to doubling of the minimum wage at the beginning of this year.

For example, in Kiev you have to pay for the apartment, if its area is more than 60 squares. A resident of the capital with in 100 squares will pay the tax for 40 meters. This year will come last payment system, then the tax rate was one percent of the minimal salary for 40 squares you will have to pay the state 551 hryvnia. Next year, Ukrainians will pay for this year. As stated on the website of the KSCA, the tax rate will reduce to 0.75% of the minimal salary, forty squares would cost 960 USD.

If the second apartment is rented, the tax is charged on all its area, not just for the meters in excess of. 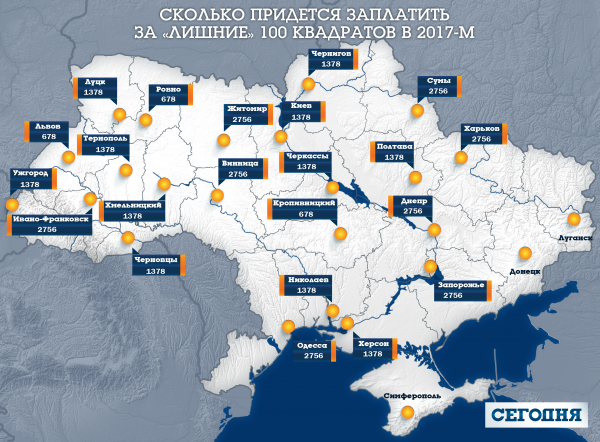 When you need to pay and who face fines

Prior to July 1, the IRS will send out decision notifications and receipts with tax amounts. You need to pay no later than August 28. If the receipt for payment of the tax on the apartment, which, for example, already sold, or if a receipt did not come, but under the law the estate should be taxed, you need to contact the local office of Fiscal services.

The tax is levied once a year. In addition, owners of large homes (over 300 square metres for apartments and 500 houses) will have to pay 25 thousand hryvnia. For example, the owner of the apartment with an area of 310 square meters in Kyiv before July 1 must come payment system by 28.4 thousand.

If you pay bills in September, will have to pay a penalty of 10% of tax if, in October – the amount of the penalty reaches 20%. In addition, the tax inspector may impose a debt on the part of the property tax lien. If the tax is not paid for a long period of time the property is sold by court order. In addition, for tax evasion are criminalized (article 212 of the CCU).

In the Fiscal service of the state, the property tax exists in all countries of Europe. “In all the countries of Europe and большинствt countries, this tax exists, and its citizens pay. In Ukraine it is paid to the local budget (ie budget, where citizens owning real estate). In decentralization, local government reform, the local authorities granted more powers”, – the press service quoted head of the tax division of the Department of taxes and fees from individuals of the SFS Yuri Tymoshchuk.