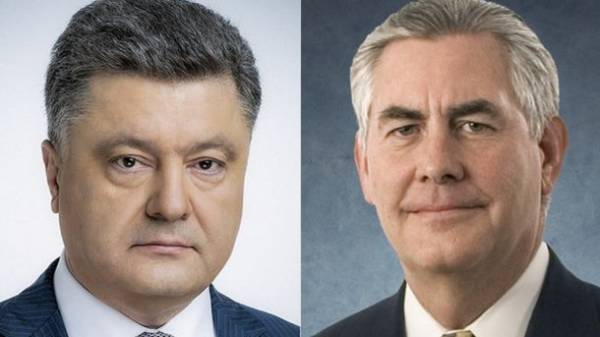 The President of Ukraine Petro Poroshenko held telephone consultations with U.S. Secretary of Rex Tillerson before the visit of the American diplomat to Moscow, during which discussed the situation in Ukraine, the press service of the head of state.

Tillerson assured Poroshenko that the U.S. is not retreating from its position on Ukraine and maintain the inviolability of its borders, which temporarily broke the Russian. Moreover, he assured of the commitment of Americans to the Minsk agreements, which he said must be performed, in particular, insists on the truce in the Donbas.

He noted that the White house will not allow a batch of agreements on conflict resolution in Ukraine and Syria.

In turn, Poroshenko thanked the Secretary for the support of Ukraine in its struggle against Russian aggression in the Donbas and the non-recognition of the annexation of Crimea.

The President also stressed that today Ukraine and the United States together to protect the democratic values that unite our countries, so the sanctions should be maintained until full restoration of the territorial integrity of Ukraine.

The two sides agreed to continue bilateral consultations after a visit by Rex Tillerson in Moscow.

We will remind, yesterday Rex Tillerson arrived in Moscow on an official visit for meetings with representatives of the Russian government, in particular today, April 12, to be held a meeting with Russian foreign Minister Sergei Lavrov.