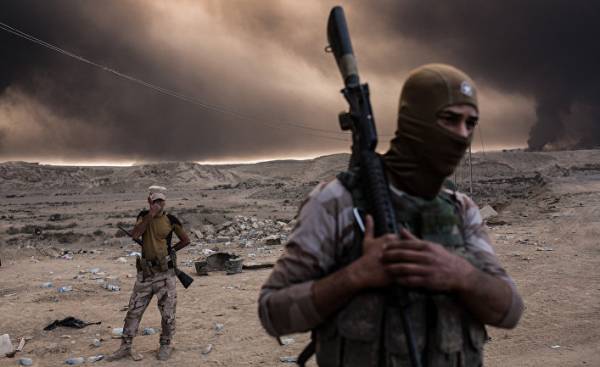 Decisive American action can radically change the position of other countries. Enemies become more cautious, the friends of benevolence, and those who took a wait, begin to demonstrate a willingness to cooperate. Such actions will give additional leverage in the negotiations and increase the chances of the formation of coalitions. Last week President trump demonstrated American determination, causing a retaliatory strike by the forces of Bashar Assad after they used chemical weapons. Now trump is bound to continue, taking large-scale diplomatic effort to end the Syrian bloodshed.

The most interesting reaction to the us attacks demonstrated Shiite leaders in Iraq. Last Thursday the Prime Minister of the moderate wing, Haider al-Abadi and radical from among the spiritual leaders of the Shiites, Moqtada al-Sadr (Moqtada al-Sadr) in one voice called on Assad to resign. As-Sadr was, predictably, condemned the Americans for a blow. Abadi indirectly praised them, describing how Iraqis suffered from the chemical weapons of Saddam Hussein.

These demands for the resignation of Assad, it would seem, contrary to conventional wisdom, according to which the conflict between Sunnis and Shiites is at the center of everything that is happening in the middle East. Shouldn’t the Iraqi Shia in the most natural way to side with the Iranian stooges, who are fighting in Syria? Shouldn’t they approvingly to respond to the brutality with which the Assad regime treats its opponents from among the Sunnis? But there are issues more important than the well-known sectarian differences. The people of Iraq know very well that the Assad regime supported by fighters and bombers, which since 2003 have killed thousands of Iraqis and hundreds of Americans. The Bush administration would look at such support through his fingers, and President Obama actually didn’t notice her.

In August 2009, the then Prime Minister of Iraq Nouri al-Maliki has demanded that Syria extradite two persons who had taken refuge in Damascus, Iraqis, stating that they are related to attacks in Baghdad. The Obama administration instead of supporting the Iraqi government or to claim to investigate the week was silent. Then the state Department announced that the United States officially take a neutral stance. Decisive actions of the US last week signaled a different kind.

Now America can lead the effort to create some semblance of stability in Syria. Washington needs to recognize that while Assad is in power, peace in this country impossible. However, it should be understood that in the case of the departure of the dictator millions of Syrians, particularly the Christians, the alawites, feel that he was in serious danger. The goal should be to replace the Assad regime with a new system of government that will be able to reassure these minorities, and at the same time put an end to the oppression of the Sunni majority by the current government.

To achieve such a result will require a huge diplomatic effort and extraordinary ingenuity. But the US has the clear advantage. Unlike Iran and Russia, America is not interested in the implementation of control and engage in some military positions in Syria. On the contrary, as soon as stop the bloodshed, the United States and great joy will leave Syria to the Syrians.

How can the Washington to intensify its diplomatic efforts in Syria and at the same time to weaken Iranian influence in Iraq?

First, the United States needs to use public diplomacy, emphasizing the responsibility of the Assad regime for the suffering of thousands of innocent Iraqis over the past 14 years. If there is evidence it is also necessary to explain the efforts the Assad regime to strengthen the “Islamic state” (banned in Russia organization — approx. TRANS.) the Dictator tries to create the impression that his regime is the only alternative to the domination of the terrorists. To achieve his, he attacks the moderate Syrian opposition, but released the extremists who become the leaders of ISIS.

The U.S. should encourage Saudi Arabia to play a more constructive role in Iraq, using their substantial economic influence as a counterweight to Iran. The Saudis have in the past shown a willingness to treat Iraq as the Arab partner, and not as Shiite enemy. Such realism, which showed the Saudi leadership in former times, as if reborn. Two months ago the foreign Minister of Saudi Arabia Adel al-Jubeir (Adel al-Jubeir) visited Baghdad. It was the first in 27 years visit of the head of the rank.

The administration of the tramp it is necessary to refute the misconception that Saudi Arabia prevented US to support the Shiite uprising against Saddam Hussein following the liberation of Kuwait in 1991. It is still believed by many Iraqis, even some reputable historians. But in fact, it was exactly the opposite. USA need to publish materials about the attempts of Saudi Arabia to persuade President Bush and President Clinton to support opposing Saddam Shiite rebels. Saudi-Iraqi relations can not develop, if not to refute the notion that Riyadh is partly responsible for the mass murder of Iraqi Shiites.

American diplomats need to involve regional Arab players to tackle difficult problems of reconciliation after a conflict has ended. This will be a task to Syria after a peace agreement, and before Iraq when Mosul would be liberated. People can not control the reconciliation process, which must comply with local cultural characteristics and to eliminate the awful legacy of the totalitarian Arab regimes. Nevertheless, diplomats their actions should emphasize the importance of this process.

Such political and diplomatic action will complement and reinforcement of the concrete measures to change the situation in Syria, such as establishing security zones or some no-fly zones. Realize it will be difficult, and the results will be seen immediately. But such a mechanism will greatly assist in eliminating common to all danger from radical extremism, as well as in the containment of refugee flows, which have become a real humanitarian catastrophe and a threat to American interests.