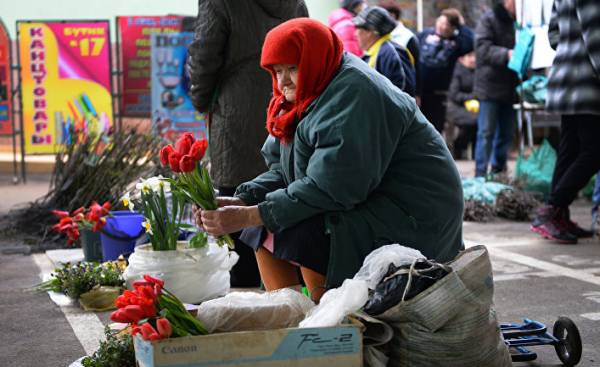 Facts about Moldova and Transnistria

About the conflict in a nutshell: When Moldova seceded from the crumbling Soviet Union, it broke away from the region East of the Dniester river. In 1992 turned a short civil war. Since that time, Russia guarantees the existence of the Pridnestrovian Moldavian Republic and keep the troops there.

Tiraspol — Transnistria. For a reporter to visit the last Soviet state of Europe is both easy and difficult.

It is easy because you just have to fly to the capital of Moldova Chisinau, rent a car and drive the six-mile (Swedish mile is 10 km, approx. lane) to the East. There is Transnistria, the country with the hammer and sickle on the flag and the numerous statues of Lenin, carefully polished and well groomed. 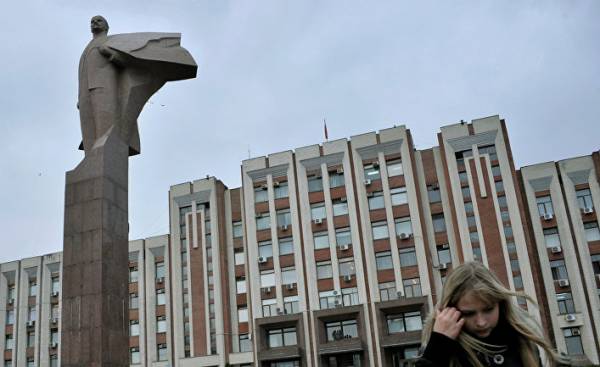 But it is difficult because in the country, the journalists — clearly unwelcome guests. It is strictly forbidden to conduct professional recording and photographing without permission. Application for press accreditation must be submitted thirty days, but the one who disseminates information that is “untrue” insults the honor and dignity of citizens, harms the Transnistrian enterprises or as something else covers the events contrary to the interests of the Transnistrian Moldovan Republic, will no longer receive a visa.

What is true, is determined by the Transnistrian government. This causes confusion, because, in fact, this state does not exist.

Transnistria — like memory. Going through border control, where a policeman with a growl asks if you speak Russian. Get permission to stay in the country for a day (can be extended from the hotel). Change yourself Transnistrian rubles, the currency that are also unrealistic, like the country itself, but nonetheless rustling in his pocket.

We drive to Tiraspol and return to 30 years ago in the past. The main street is called “Street of the 25th of October” in memory of the Russian revolution of 1917. The Parliament, the Supreme Council, there is a tall statue of Lenin. At the municipal building, the “House of Soviets”, — a bust of Lenin. Near the University also has a bust of Lenin.

The security service until this winter was called the KGB. In winter, the newly elected President Vadim Krasnoselsky changed the name of the secret police on MGB, KGB was called in the days of Stalin.

Transnistria is a piece of land stretching along the Eastern Bank of the Dniester river. This separatist Republic, seceded from Moldova, the unrecognized but the same separatist republics of Abkhazia and South Ossetia.

Even Russia does not recognize the Pridnestrovian Moldavian Republic, although it guarantees the existence of this little “country fun”. Russia supplying Transnistria with gas, pay pensions, two years ago set back more than 600 thousand books and keeps in the country of soldiers and peacekeeping forces.

Transnistria declared its independence in 1990. There was a short civil war with Moldova. Since then, Russia has 25 years guarantees peace. When Russian troops entered the territory, General Alexander Lebed said that Moldova is led by “fascist” — that’s exactly the same accusation that Russia directed against Georgia and continually addresses Ukraine.

I mentioned the difficulty for journalists is that all of this is a drastic contrast to the time in which we live. In other European countries we speak about globalization, business, openness, flexibility, flow of information on the Internet.

In Transnistria, you find yourself in the past — in the Soviet 1970-ies. Here, people live with the memory of a country that was big and powerful and in which day by day nothing changed.

Is it possible to stop time?

In a sense, it is possible, if time will stop in the human heads.

We visited the village of ciobruci, a former collective farm, collective farms, which was nine thousand inhabitants. The farm was called “Lenin”. In the middle of the village stands the house of culture crimson color with white columns and roof, built in 1965, when Khrushchev was the leader of the Soviet Union.

Of course, right in front of the house of culture is a statue of the founder of the Soviet Union — Lenin.

This would not be anything strange, at least too strange, given that this former Soviet Republic. But all these statues are in excellent condition. And the house of culture looks new it looks even prettier than they was once in Soviet times, and the interior is also now in the process of updating.

The head of the house of culture named Nikolai, Gulluk. He is 69 years old, and he has worked here his entire adult life. He calculated the performance of the farm in the 1970-ies and 1980-ies. Carrots! Tomatoes! Apples! That was a garden, the breadbasket of the Soviet Union. The farm has sent their yields throughout the Union — from Karelia and Leningrad to Moscow and Siberia.

The Soviet Union came here. How many guests, how many of the artists performing at the house of culture!

It shows pictures in the lobby. Here is the first farm leaders, visiting artists here, that then performs its own collective choir. He opens the heavy door in the theater room, ascends the stage, behind the curtain and turns on the light: every projector turns on with cotton.

“And now there is no party and no country, — says Nikolay, Gulluk All think only about themselves…”

We will dine at Svetlana and Koli. She brings us soup, beet soup, and he wine of own production. Kohl was born on the farm. He fought in Afghanistan. “I became a man.” He says that Gorbachev destroyed the Soviet Union, the drunkard Yeltsin plunged Russia into humiliation, but Putin — Putin is strong, he will adjust and will make Russia powerful again.

Kohl hopes that the region can once again become part of Russia.

When Putin in defiance of international law annexed the Ukrainian Crimea, Transnistria, too, has filed a formal application for accession to Russia.

Putin, however, to meet this desire did not go. The reasons are simple. First, Russia and Transnistria are not contiguous, second, it would provoke an international crisis in connection with the illegal takeover by Russia of another region. Under international law, Transnistria is part of Moldova.

Transnistria — another frozen area that surrounds Russia. While there is Transnistria, Moldova cannot become a member of NATO or the EU.

And this is — Putin — could cost the billions of dollars that are spent in support of this thin, snaking strip of land.

Gas in Russia is a more effective weapon than some artillery and tanks. Russian energy company Gazprom owns a controlling stake in MoldоvаGaz, partially owned by the state of Moldova. MoldоvаGaz annually imports approximately three billion cubic meters of gas from Russia. Two billion go on in Transnistria.

But the government of Transnistria does not pay for gas. This means that MoldоvаGaz there is a debt to the Russian Gazprom, and it is growing. Now it reaches dizzying 5,79 billion dollars, that is soon to be compared in size with a GDP of Moldova, the sum of all goods and services produced in a country during the year. In 2014, the GDP of Moldova made up $ 7.9 billion.

Russia has economic leverage that can be used against Moldova, as well as full control over Transnistria.

I walk in the street 25-go October in the capital Tiraspol. I go to the bookstore, where hung on a poster with the idols: the newly elected President of the Krasnosel’skii, Vladimir Putin and Joseph Stalin.

Then go to the post office for the papers. It’s a Saturday. Nearing lunch. I choose “the Truth”, the newspaper of the local Communist party, which complains of political persecution and government authority “Transnistria today,” which notifies on new decree of the President: he appointed a Commission on Patriotic and spiritual education of young people.

“Truth” looks like a photocopied school newspaper, and “Transnistria today,” recalls the 1950-ies.

“You first customer,” — says the lady in the kiosk.

Go out on the street. It is empty. I look in the direction of the gas station, which belongs to the local company Sheriff, and then further, to the stadium called “the Sheriff” and a large market, which is also called “Sheriff”.

The company also owns a phone operator, a large textile factory, the Transnistrian cable television; it controls 50% of the construction market and 28% of the media market.

70% of the media controlled by the state. The remaining 2% are considered to be independent.

Company “Sheriff”, which was founded by a former policeman (hence it is called), and also controls the largest party of the Supreme Council.

All of this follows the usual pattern, in which events unfolded after the fall of communism. The oligarchs divided the old monopoly of the Communists with a corrupt government (the son of one of the previous President is accused of embezzlement of Bank funds, Transnistria is a transit point for smugglers and so on). 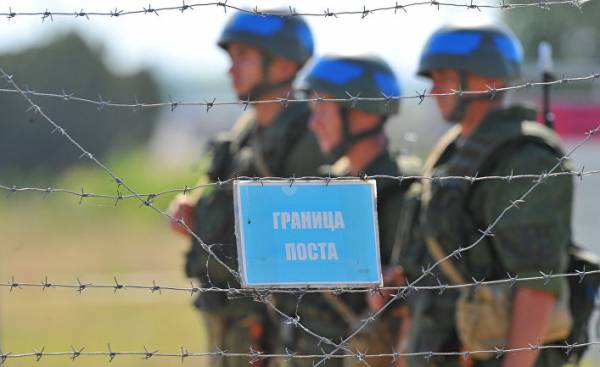 In Transnistria used the symbolism of communism and its slogans, and also cultivated a blatant nostalgia: around Soviet monuments, strong, purposeful peasants holding baskets full of vegetables and fruits; peasants, workers and the astronaut, together look to the future; tanks on pedestals; the young fighter, who gave his life for communism in the 1920-ies, and Lenin, Lenin, Lenin!

In 2006, 96% of the electorate voted in a referendum to become part of Russia.

It says the guide, which we trust, because tourists in Transnistria is not allowed to be reporters.

“Our goal is to strengthen the Soviet atmosphere,” says the guide.

If Transnistria is like a memory, it is a little fake state returns to life and other images — the economic inefficiency and the fact that few people wanted to live in the Soviet atmosphere. This place tells about itself as about the granary and orchard of the Soviet Union, but it is forced to import food for hundreds of millions of dollars a year, because agriculture is working.

In the farm village of ciobruci, people used to live nine thousand people. Now there are about five thousand. The rest moved to Russia or Western Europe in search of a livelihood. Svetlana, which is good beet soup, occasionally works in a retirement home in Italy. There she earns 800 euros a month — money, by which Svetlana and nick can help his daughters. One of them moved to the city, the other married a Russian officer and emigrated to Russia.

In 1989, Transnistria was 750 thousand inhabitants. Now they are 350 thousand, says our guide. Exactly how many people live in the European Soviet state, the public should not know. Census 2014 — a state secret.

There are estimates according to which in the country there are only 300 thousand people, most of them children and the elderly. 180 thousand Russian citizens, as Russia for free giving away their passports. The protection of its own citizens in the future may become a pretext for the use of military force.

Transnistria is a small bankrupt police state in Europe. “It has not detained the KGB?”, — asks the guide, seeing as urban Andersson photographing something in the street. The hotel receptionist gets nervous when I ask her is it legal to change rubles to the Euro.

Tuvalu, tiny island nation somewhere in the Pacific ocean, annually receives less tourists in the world. It is Moldova, which in 2013 was visited by only 11.5 thousand foreign guests.

If Transnistria fell into these statistics, the country would have broken records and Tuvalu and Moldova. Here nobody comes. At the hotel where we live, there are no guests. The streets are empty on Saturdays and in the evenings there is dead silence. Probably in a few years, the last Soviet Republic the sad old joke will become reality:

Who goes last, he extinguishes the light.