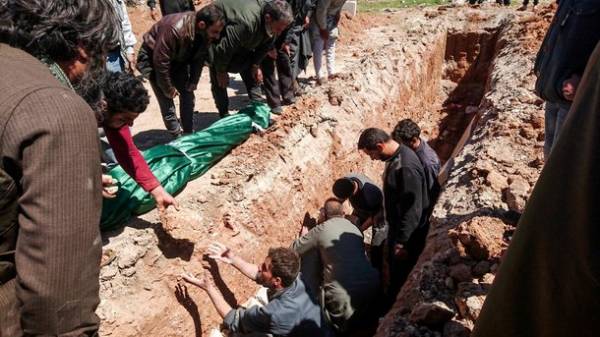 This week has been full of tragedy. The Northern capital of Russia for the first time in modern history has faced a terrorist attack against civilians, and the inhabitants of the Syrian city of Khan shaykhun was first attacked by chemical weapons.

On Monday afternoon in St. Petersburg in the train station on the stretch between the stations “Sennaya” and “Institute of Technology” explosion. Since an improvised explosive device from an empty case of car fire extinguisher was Packed with shrapnel, died 14 people. Another 47 people were injured. Later at the metro station “Ploshchad Rebellion” was discovered improvised explosive device, which managed to defuse in time.

There is an assumption that it was not worked on due to the fact that the intelligence services of the time blocked all cell reception in the area. But still the question remains, why in the strategically important object in the largest metropolis of Russia, and even in the time of the stay of Russian President Vladimir Putin, was a possible terrorist attack.

“Of course, the fact that this terrorist act was committed at the time of stay in the city of the President — it makes you think and pay attention. This is the subject for analysis of special services, — told reporters the day the press Secretary of the President Dmitry Peskov. Any terrorist attack that happens in the country, is a challenge to every Russian citizen, including the head of state, including our President.”

However in hot pursuit to detain anyone failed. Moreover, in the first hours after the explosion, was named a suspect a man with a beard and a black coat, which were the focus of cameras to the station “Sennaya” two minutes before the explosion. He was a citizen of the Russian Federation Andrey Muslim (Ilyas) Nikitin, who, knowing that his photo disseminated by the media, personally appeared the police. There Nikitin has told that no claims to it are not, but still it changed his life.

“This story is very much complicated my life. Yesterday I couldn’t fly home — the other passengers refused to fly with me on the same flight. Besides, I lost my job: today my employer in Nizhnevartovsk informed about my dismissal, referring to the request of the regional investigative Committee”, — said the Agency IslamNews Andrey Nikitin.

Then the Investigative Committee of the Russian Federation called a terrorist 22-year-old Akbarjon Jalilova, which, according to law enforcement authorities, to become a suicide bomber. But yesterday the Russian investigators there was no evidence that a native of Kyrgyzstan was in some extremist organizations and personally assembled the explosives.

But yesterday, in one of the houses of St.-Petersburg on Friendly Avenue has found a new an explosive device, which failed to notice and disarm. Was detained a few suspects who did not resist. Yesterday was not yet known whether the detainees with a terrorist attack in the subway.

At the time of writing, no terrorist organization has claimed responsibility for the attack in the subway. The Western media linked the incident with the war in Syria. Columnist of the British newspaper “i” noted that many Islamists from the North Caucasus have gone to fight in Syria, the war against which a year ago got involved and Putin. Moscow also accused of the fact that it holds special operation on the physical elimination of the Islamists abroad. In Turkey, for example, there was a mysterious series of killings of natives of the Caucasus and Central Asia — 12 killed. ISIS and the Syria “Jabhat al-Nusra” has repeatedly declared a Jihad against Russia. The Daily Telegraph publishes an article by its analyst Roland Oliphant, which connects the explosion in St. Petersburg with the anti-terrorist campaign in the North Caucasus.

In a number of countries in solidarity with grieving Russians monuments were either highlighted in the colors of the Russian flag, or the lighting was off. But the next day the world mourned for the hundreds of dead Syrians from chemical weapons (probably sarin) — after the bombing sites of the Syrian armed opposition in Idlib town of Khan shaykhun was covered with a poisonous cloud. According to eyewitnesses, people were dying from suffocation, many lying on the ground motionless, the other was observed vomiting and was frothing at the mouth.

Version to UK-based Syrian monitoring centre for human rights, an airstrike in Khan shaykhun made aircraft of the Syrian army or the Russian aviation. The military of Bashar al-Assad denied using chemical weapons, claiming that the gas sprayed members of the opposition group “Hayat Tahrir al-sham” associated with “al-Qaeda”. According to the Russian military, the Syrian aircraft attacked a large warehouse of ammunition, where the militants had stored chemical weapons. A version of the speaker, the Russian foreign Ministry Maria Zakharova, a video of the alleged use of chemical weapons are staged.

On Wednesday morning the United States, Britain and France have submitted to the UN security Council a draft resolution condemning the use of chemical weapons in the Syrian province of Idlib. The evening of the same day, U.S. permanent representative to the UN, Nikki Haley said that Washington was ready to retaliate in Syria, without waiting for the vote on this resolution. “How many more children have to die so Russia finally worried?” — asked a rather rhetorical question Hayley. During a press conference at the White house on Wednesday, President Donald trump said that “takes on” future policy toward Syria.