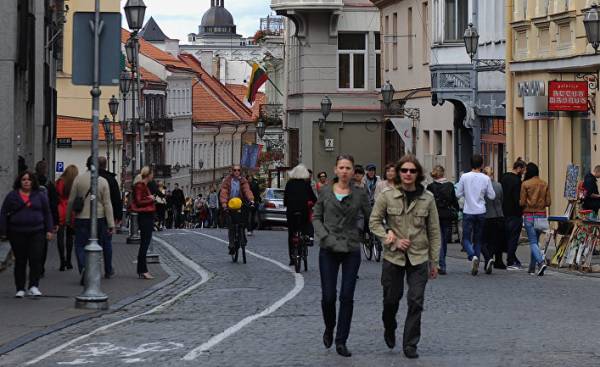 Lithuania has reached a point that economic growth and reduction in unemployment still does not encourage people to stay at home, so the residents still massively leaving where they are better. Such a conclusion can be drawn from the message of Audry Sipaviciene, head of Vilnius office of the International organization for migration. According to her, it shows uneven economic growth: some residents feel it, and the situation even worsens.

“Of particular concern are the trends observed in the last two or three years. Just last year, the Lithuanian has left 50 thousand people, this year for a few months — 14 thousand. What is this situation different from the old? First, the fact that the first time we are seeing a trend where emigration is not associated with economic performance. That is, economic indicators are growing (GDP growth and wages is one of the largest in Central Europe), high unemployment, but simultaneously growing emigration and growing very rapidly. What this shows? This shows that economic growth is distributed unevenly. It feels only a small group of companies. And the situation of the other residents even getting worse,” said Sipaviciene.

Sipaviciene said that since independence, Lithuania has left more than 900 thousand people, almost a quarter of the population. The net loss is 680 thousand inhabitants. According to this data, Lithuania leads in Lithuania for more than 10 years.

“It is important not to stop emigration, not to deny the possibility of choice. Emigration as a value is very necessary, is not evil. Evil — emigration as exile. It is not necessary to stop, to deny this possibility, it is necessary to do so, emigration was only temporary, to encourage return migration and to assist the undecided,” said Sipaviciene, noting that the return is even more difficult for people to process than emigration.

“Such people must not only solve the problems associated with recovery, but faced with a negative opinion of the Lithuanian residents — loser, what have you come here. So difficult not only the actual situation, but also psychological problems. And real help really is not enough”, — said the expert.

However Sipaviciene also invites to think about a reasonable policy of immigration. According to her, experience and studies in other countries show that a reasonable immigration doesn’t displace local residents and does not hinder the return of those who left.

“On the contrary, it can increase the economic potential, to attract investment, to make Lithuania more attractive for the Lithuanians,” — said Sipaviciene.