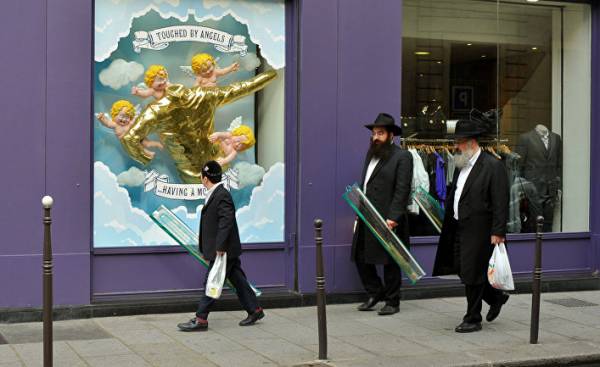 I grew up in the suburbs of Paris, where he lived until 18 years until he immigrated to Israel. French is my native language, Paris — the city of my childhood. The study of the history of Islam I often live in this city. Last Saturday, early in the morning, I went to a prestigious Marais for prayer in the local synagogue. On the way I saw a primary school on the wall of which hung a sign of mourning in memory of the Jewish children of the neighbourhood, arrested by the French police and sent to death camps during the Second world war.

The synagogue I go to, bears the name of Rabbi Frankfurter, who along with his family was destroyed by the Nazis. Like most of the Jewish community of the quarter. Today it is the Sephardic synagogue, and most of the parishioners are immigrants from North Africa. Before beginning the prayer, the Rabbi said that in this district at 12:30 there will be a demonstration of Pro-Palestinian BDS movement, and why he received a definite order to hold a prayer service earlier than usual, to near there is not a single Jew. I asked the congregation, do the police provide them protection, allowing for demonstrations that pose a danger to Jews who do not relate to the topic of the middle East conflict irrelevant. The answer was: the police have enough resources for the protection of the synagogue. Later I learned that similar orders from law enforcement agencies received eight synagogues in Central Paris.

French Jews feel threatened from all sides. In the first place from the anti-Israel forces, many of whom are Muslims, who often demonstrate a classic anti-Semitic prejudices. The vast majority of Muslims in France holds anti-Semitic views. In 2014, half of racist incidents in France were directed against Jews. Against such manifestations of power are actually powerless. This is evidenced by the mass Exodus of members of the Jewish community of the Parisian suburbs — there’s a sizeable Muslim population. Someone goes to Israel, someone in safer places in the country.

The Jews also fear the coming to power of right-wing nationalists. Marine Le Pen, ranked second in pre-election polls, said that if elected, it will ban the wearing of piles in public places. And while she explained this idea that the Jews must also sacrifice something in the name of equality (along with the ban to wear the hijab), many members of the Jewish community in France fear the second echelon leaders of the National front, some of which expressed anti-Semitic views.