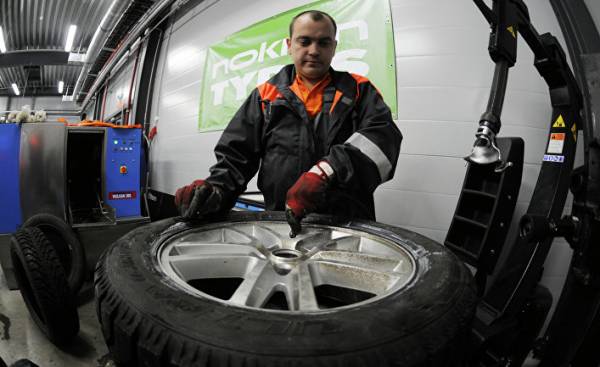 It’s so unusual that it is necessary to explain the photo. The Russian tabloid newspaper Komsomolskaya Pravda published one image, which was visible part of the tires. On it was the inscription Made in Russia. The photo was not made in Saint-Petersburg, which produces tyre of the Nokian brand, and in Canada, where they bought the journalist who made this picture. Russian tires in Canada? Early Russian products on the demanding West can be found rarely. But now the situation has changed — at least partly.

It was during the longest recession over the last 20 years was made possible something that until now seemed impossible: Russia may hope still to become an exporter in the modern sense of the word. On the world market, it still was known primarily as a supplier of energy. Despite the fact that Russia is essentially a developing country, it has never been a place where the production cost was really low. In addition, it has never been a great exporter of consumer goods, which is China.

The structural reasons for this weakness of industry and production in recent times, little has changed, but there is another factor that Russia wins: the ruble. Against the Euro and the dollar, the Russian currency at the end of 2014, have fallen sharply after prices fell for oil. The Central Bank then refused to support the ruble. And with the current exchange rate of the Russian producers can sell their goods abroad continues to be 40% cheaper than three years ago, when they — in terms of rubles — could count on the same profit.

The combination of a weak national currency and a two-year economic crisis in Russia due to the fall in oil prices, and from which the country is now secretly chosen, led to a twofold effect: in dollar terms, the size of Russian exports last year decreased by 17% to 285 billion dollars. However, purely physical volume grew by 3%, but not evenly. As the crisis also affected Russia’s neighbors — former Soviet republics, their demand for Russian products fell. And that’s where it was most competitive. However, increased Russian exports to the markets of the so-called “far abroad”.

When the “Komsomolskaya Pravda” in may 2016 printed photo Russian tires in Canada, Nokian Tyres about 70% of the production of his Russian enterprises exported. On the same level he is, according to General Director Andrei pantyukhova, remains today. And in 2014 the exports amounted to 60%.

Nokian Tyres sells its products in more than 40 countries. Its main markets are Europe and North America. However, this is not a Russian, but the Finnish company. Competitor Continental also sells on the world market of tyres produced at its Russian factory. When we founded the Bosch and Siemens company BSHG going to the same to double the export of household appliances. A giant consumer goods Procter&Gamble sells abroad about one third of the products manufactured in Russia. At Unilever Vale’s exports is also growing. The Italian company sends Candy made in Russia washing machines in Japan and Australia.

Chief analyst of Sberbank Mikhail Matovnikov have carefully studied the list of the most successful exporters. That it is dominated by Western manufacturers, with subsidiaries in Russia, no, he said, nothing surprising: “In the last years, they mainly invested in modern production”. In the last century and up to 2012, Russia experienced rapid economic growth. The international company was interested in the Russian market with 143 million consumers. Now, when due to the crisis, domestic demand declined, excess production of local enterprises have to export.

According to official data, Russia’s GDP in 2015 fell by almost 3% and in 2016 by 0.2%. Russian producers were able to achieve better results in areas where strong protectionism. So, the Kremlin responded to imposed by the West over the Ukrainian crisis, the sanctions ban on the import of many food products, and in Russia, their production grew at 3% in 2015 and 3.5% in 2016. For this “reversal” in the agricultural sector too little, but last year the export of these products has increased 18%. A significant portion of the export of grain and sunflower oil due to the record crop.

Increasing also export cars. And once again we are talking about the products of international companies, such as Volkswagen, Ford and Nissan put the engines from Russia for its enterprises in other countries. Russian manufacturers lack expertise in the field of high technologies, and, unlike foreign competitors, they cannot minimize risks in the Russian market due to the global market. Their problems are added also large loans, bureaucracy and corruption as well as underdevelopment of the enterprises-suppliers of components. While workers ‘ wages grow faster than productivity. So only one weak currency can hardly be considered the Foundation through which you can become a “world champion” in exports.