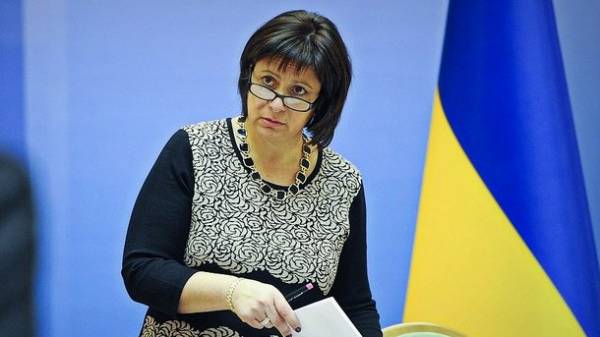 The former Minister of Finance of Ukraine Natalia Yaresko was an action plan in case of election of the Prime Minister after the dismissal from this position Arseniy Yatsenyuk. This was told herself Yaresko in an interview with “New time”.

Jaresko notes that above all would reduce the government.

“Of course, I had a plan, some idea of the future government, and I have done the preparatory work. I would definitely reduce the size of government. This whole system is overloaded it is difficult to manage, and a huge bureaucracy creates generous incentives for corruption”, – said Yaresko.

The former Minister noted that they are also focused “on those things that give quick and visible for people in the country result”. “I know that the same logic is guided by the current Prime Minister Volodymyr Groisman”, – said Yaresko.

In addition, she stated that she would work with changing funding mechanisms in education and health, considers inefficient today. “And I’m very glad that healthcare reform is now gaining momentum”, – told ex-the Minister of Finance.

The first stage of work of the government, of which she was a part Jaresko described as a very hard and painful for the population policy. She complained of the inability at that time to do parallel important process – “to give people an understanding of why all that is important and valuable that painful sacrifice was not in vain”.

“Fight for the hearts and heads of people in the country – to convince, to prove, that’s what counts now. Because today we lost time and gave odds with the populists with their personal interests,” – said Yaresko.

She expressed confidence that the state must renegotiate the contract with its own citizens, in order not to lose them, and so falling confidence. “I’m primarily talking about people who changes the country needs, because fighting corruption is possible only if there are those who believe in the fight against corruption. If people are cynical and pessimistic, to fight corruption unthinkable difficult,” – said Yaresko .

She noted that the country needs a more rapid economic growth, and 3% a year is clearly not enough even to return to his former level of welfare. In addition, it is not the privatization of SOEs.

“But privatisation is not so much a question of money, but the opportunity to tell the world: the state is no longer engaged in this strange case. Of course, there is a small percentage of enterprises not subject to privatization, but the majority may not burden the state. They are, as a rule, unprofitable and continue to spend public resources. From the point of view of any normal businessman – it is a complete nonsense,” – said Yaresko.

The third important to address the issue – the question of land, I’m sure Yaresko. “We will not become a normal democracy, while part of the land will not be available for sale, but the populists have already Spud the subject, threatening the sale of Ukraine. Even in Russia, part of the land available for sale, and in Ukraine – no, we are losing a huge amount of investment. If the system to work with everything I have listed, you will see economic growth in the real, tangible, ” – said Yaresko.

Earlier, Natalia Jaresko got a job in Puerto Rico – she was appointed Executive Director of the Council for financial management and control for Puerto Rico (PROMESA). The main purpose of this post will be the return of financial stability in Puerto Rico.

As is well known. 2 Dec the President of Ukraine Petro Poroshenko has granted Jaresko Ukrainian citizenship. Together with her Ukrainian citizens have also become future Ministers invited from other countries, Alexander Kvitashvili and aivaras Abromavicius.

On the same day the Verkhovna Rada of Ukraine approved the new composition of the Cabinet of Ministers, composed of Natalia Jaresko as Finance Minister.

14 April 2016 the second government of Yatsenyuk was dismissed. Yaresko was deprived of the post of Finance Minister in the new government, this position was appointed Alexander danyluk. Yaresko was predicted to the Premiership, but she never got it.