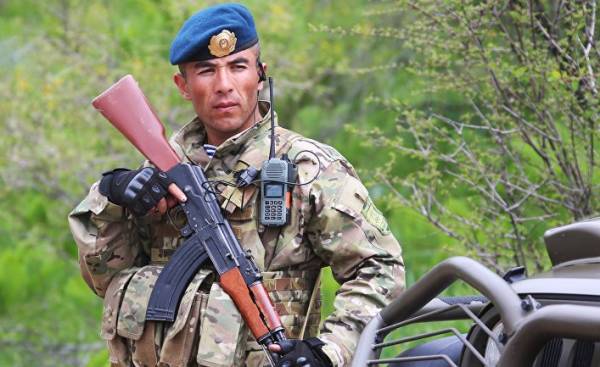 As follows from published data of the United States government, in the last two years, the United States significantly increased the pace of training elite military units of Tajikistan, Uzbekistan, Kazakhstan and Azerbaijan. Meanwhile, the US virtually stopped training a soldier from Kyrgyzstan, which previously was the largest recipient of such aid.

The financing study is conducted under Section No. 1004 law of the United States appropriations for national defense (Section 1004 of the National Defense Authorization Act) giving the U.S. Department of defense the right training, and equipping foreign armed groups involved in the fight against drug trafficking and international organized crime. The training is conducted by special forces of the US army for special purpose units in the countries-recipients. The fact that training is usually not advertised and reported as a rule, only in the annual reports of the US state Department.

In General, under the guidance of American instructors was held training activities 1153 military from the countries of the Caucasus and Central Asia in fiscal year 2015 (which begins in the US on 1 October of the previous calendar year). According to the latest reports, the 2016 fiscal year it was planned to train 1157 soldiers. The data for both years are a record, as in 2013 and 2012 were trained 1141 and 841, respectively, according to Security Assistance Monitor, a Washington organization that collects data on us military aid.

The data for 2015 represent the number of actually trained soldiers, and for 2016 — only plans for that year, and it is unknown whether they managed to implement these plans in full. The Central command of the armed forces of the United States did not respond to a request for additional information.

In the last two years, Tajikistan was the largest recipient of assistance under Section No. 1004: 2015 886 military personnel were trained in this country, and in 2016 it was planned to hold a briefing for another 340.

In Tajikistan, U.S. special forces trained members of the National guard and some units mentioned in documents under the abbreviation of MGSO. The state Department and the U.S. Embassy in Dushanbe did not respond to a request to decipher the abbreviation. Held in 2015, the training courses lasted, as a rule, three months, but sometimes was limited to six weeks. The national guard reports directly to the President of Tajikistan Emomali Rahmon and informed American diplomats called it “Praetorian guard”, i.e. the bodyguards of the President.

In Uzbekistan in 2015, 267 military personnel were trained, and in 2016 it was planned to hold a briefing for the same number of soldiers of the same power units. This fact is remarkable, because the US imposed in 2002, restrictions on providing military assistance to Uzbekistan because of human rights violations in this Central Asian state. But in 2011 Washington removed these restrictions, as needed help Uzbekistan to arrange supply of U.S. troops and NATO forces in Afghanistan via the so-called Northern distribution network.

In Kazakhstan, in 2016 it was planned to organize training events for 450 soldiers. Two events had to organize a special forces of the U.S. armed forces, and the third — the US Navy seals. Earlier Kazakhstan received assistance under Section No. 1004 only once: in 2012, instructions were 125 soldiers.

In Azerbaijan, the us special forces had to conduct two training courses for 100 employees of the Ministry of national security. But the Ministry was disbanded in 2015. The U.S. Embassy in the Republic did not respond to a request to clarify the situation. Although the US state Department adheres to the rules on providing equal assistance to Azerbaijan and Armenia, U.S. Department of defense is not obliged to follow this practice. In this regard, the training of Armenian servicemen on the line of Section No. 1004 was conducted.

Up to 2015 the largest recipient of assistance under Section No. 1004 was Kyrgyzstan. Every year the US special forces trained in this Republic more than one thousand soldiers, including soldiers of the “alpha” and “Boreas” SCNS and “Scorpion”, “Panther” and “Ilbirs” defense CU. A large part of training activities was conducted on the background of the Kyrgyz-American talks on Manas base near Bishkek. But then the database in 2013 has closed, and the U.S. since then, more than not training Kyrgyz soldiers.

The increase in the number of troops of Central Asian countries studying under the guidance of American instructors, is part of an overall trend: US aid to various countries of the world under Section No. 1004 has increased from 501 million dollars in fiscal year 2011 to 957 million in 2015.

The growth of appropriations under Section No. 1004 occurs on the background of reducing funding for other programs of military assistance to Central Asian States and the Caucasus. According to recent Security Assistance Monitor, in 2015 the United States has spent 115миллионов of dollars on military aid to countries in the region, compared with 135 million in 2014 and as much as 294 million in 2012. But these figures do not include money allocated through the Program of joint reduction of threat (Cooperative Threat Reduction), which funded projects on non-proliferation and elimination of nuclear weapons.

“In Central Eurasia Section 1004 is now the main channel for providing U.S. government assistance to foreign security forces (with the exception of the program of joint reduction of threat), after the United States ceased to support these countries in operations in Afghanistan,” he said EurasiaNet.org Director of Security Assistance Monitor kolby Goodman via e-mail.

It is unclear what will be the fate of these programs under the administration of the new President. Trump has promised to cut foreign aid and to strengthen the fight against Islamist terrorist groups, the threat from which the governments of Central Asia tend to use to justify the need for military assistance.

General Joseph Votel, head of the Central command of the armed forces of the United States, speaking on March 9 in Congress with the annual report on the situation, suggested that cooperation in the field of security will likely grow.

“Long Tajikistan’s border with Afghanistan remains the main concern of the country because the Taliban periodically fighting for control of the Afghan province of Kunduz, which is less than 160 miles from Dushanbe, he said. These border issues remain a priority area of cooperation between the U.S. and Tajikistan] in the field of security, and we continue to help enhance the ability of the Tajik side to fight extremism, terrorism and drug trafficking and enhance border security and to counter other regional threats.”

According to Votel, he was cautiously optimistic about prospects for the development of cooperation between the U.S. and Uzbekistan after the coming to power of President Shavkat Mirziyoyev. “Mirziyoev confirmed the reluctance of countries to allow other countries to establish military bases in Uzbekistan, to join the military and political blocs foreign States and participate in expeditionary military operations, he said. Despite these limitations, our bilateral efforts in the military sector mainly aims to help the Uzbek side to increase border security, expand its capacity to combat drug trafficking and terrorism, and prevent the return of foreign fighters to the country. Cooperation in these areas meets the US interests in the region.”

Kyrgyzstan is “the only democratic country in Central Asia,” but she “feels political pressure from the larger and more powerful neighbors, including Russia,” reads the statement of the Central command of the armed forces of the United States. The document also mentioned that the cooperation with this Central Asian state could resume. “After a long period during which it was almost no action in the framework of bilateral cooperation, Kyrgyz military may be more inclined to dialogue in the defence sector at a higher level and broadening cooperation in the fields of border security and combating drug trafficking, terrorism and extremism,” the document says.