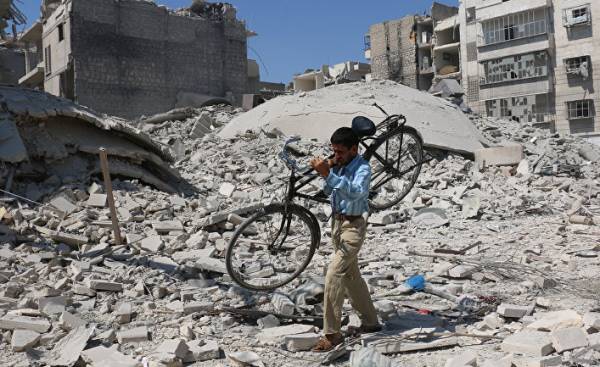 Khalifa Alita (Jalif Alitwa), Kitan Almas (Qitan Almash), family Kitan (Kitan)… are the names of civilians who died in the bombing of the school “al-Badia” in al-Mansour, West of the Syrian city of raqqa, at dawn on Tuesday 21 March. A little after midnight the aircraft of the International coalition led by the United States, bombed a three-storey building sheltering 50 families displaced from Raqqa, the “capital” of ISIS (a terrorist organization banned in Russia — approx. ed.) in Syria.

A few hours later observers of the local groups of activists, organizations such as “Raqqa silently destroy”, “the Syrian Observatory for human rights” or “al-Mansour through the eyes of its inhabitants” published photos and videos of destroyed buildings and data on number of deaths (from 33 to more than 200 people). The footage seen of bombed-out area, and even the remains of the building, ready to fall.

On the same day the headquarters of the operation “Unwavering commitment” published a report in which he claimed responsibility for the 18 missions (each includes more than one air strike) “in the vicinity of Raqqa” — three ISIL buildings, a Central headquarters, tactical units, checkpoints, armoured vehicles, trucks and supply lines. In the text, not a word was mentioned of the civilian casualties, on the contrary it was argued that the attacks were made solely for “terrorist purposes”.

Meanwhile, following recent media publications, the coalition announced the initiation of an investigation for several incidents. March 16, about 40 people were killed during prayers in the mosque of the village of al-Gina, East of Aleppo. And 17th of March there was the most tragic incident in the course of an international operation against ISIS, when at least 200 civilians were killed during air strikes in al-Jadida in Mosul.

In the last three months the number of civilians killed in the bombing of the International coalition in Syria and Iraq has increased sharply. “We are inundated with complaints and revelations” — says journalist Chris woods (Chris Woods) from Airwars (the Air war), the browser that captures losses associated with operations against ISIS. As part of its team working in the Arabic-speaking informants who monitor the publication of NGOs and local media, as well as in social networks, where relatives claim the losses.

Peak communications is in June 2016 during the operation to liberate Manuja when the U.S. military (responsible for 95% of the coalition airstrikes in Syria) recognized 24 victims among civilians. But in recent months, Obama has been a tendency to increase this figure: “in the last three weeks of March the number of civilian casualties is higher than for all 32 months of the air war,” concludes woods.

The war against ISIL in his “capitals” — Iraq’s Mosul and Syria’s raqqa — caused an increase in the intensity of the air strikes of the allies to the terrorists. “At the moment, the coalition has been overtaken by Russia in the number of civilian casualties, says woods. — For the first two months of this year, we counted at least 330 dead civilians as a result of Russia’s actions in Syria. In the case of the coalition, this number reaches 1 thousand 180”. On the project website the total number of dead civilians is 2 thousand 715 people since the beginning of the international operation against ISIL in September 2014.

Tough action in Syria, the Russian army, which has joined the fighting in September 2015 to ensure the stay of Assad in power, have killed 4100 civilians (according to Airwars). But Moscow’s intervention became less intense this year after the recent capture of Aleppo. The actions of the coalition, by contrast, have tightened “the number of deaths increased by almost 50% in January,” the report said. In 2017 the main culprit in the mass death of civilians has become an international coalition against LIH.

The US does not refute this information, on the contrary, it is the only country which has already recognized the 202 accidents. In his report, the head of the operation claims that “our goal has always been to avoid civilian casualties, but in any case, the coalition will continue its action with a view to putting an end to the barbaric tactics of ISIL aimed to intimidate the population as using human shields or firing from such places as schools, hospitals or places of worship”. “We’ve seen ISIS expel people from their homes to stage the firing point,” reads the report intended to clarify that the tactics of the terrorists is intended to lead the enemy astray.

“We must fight not only terrorists, but also with their families,” said Donald trump, the American channel Fox News, when asked about the development of the military campaign against ISIS and are using locals as human shields. “We are too politically correct war”, — concluded the then presidential candidate, speaking about anti-terrorist policy of the previous Administration.

“What is happening in the vicinity of Raqqa means that American troops have been some changes, argues woods, — we see that the coalition has become much less concerned about how to avoid casualties among the civilian population”. Thus, high Mar correspond to a “new phase, which included the war against ISIS,” says woods, but a new, more aggressive politics trump against ISIS, al-Qaeda (a terrorist organization banned in Russia — approx.ed.) and other jihadist groups.

In the same month, American newspaper the New York Times told about the plans of the White house to give the Pentagon permission for the implementation of air strikes on the positions of the terrorists to speed up the defeat of ISIL. Unlike Obama, trump wants to give more freedom to their defence Minister, Jim Mattis (Jim Mattis), in missions using drones, fighter jets and special forces. Thus, the adoption decision will be more independent, but the number of air strikes, obviously, will increase.

In response, Washington pledged to investigate in case of death of civilians during these operations. But the lack of international observers and NGOs on the territory of Syria does not allow to have a deterrent effect on the warring parties. There is no doubt that the total commitment to the elimination of ISIS will lead to an increase in casualties among civilians. And this, in turn, will be conducive to the replenishment of the ranks of the jihadists. The fact that in the eyes of the local population of the USA is the same thing that Russia and Assad, is one of the major setbacks in the fight against terrorism.