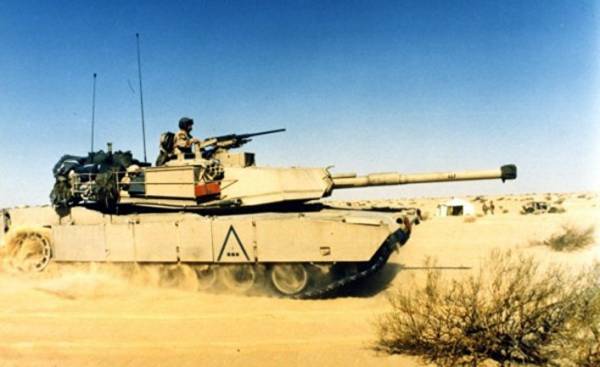 The tank is fast moving, heavily armed and well-protected monster, created specifically to dominate on the battlefield. As for any army tanks are the main offensive weapons of the country and in times of peace and in time of war are competing, trying to get the best possible tanks. In the 1980’s, the US army radically rearm your tank M1 Abrams with armor-piercing projectiles of uranium — the heaviest on our planet’s natural element. As a result, America has got a consummate killer tanks, able to destroy any existing tank.

Tank M1 Abrams was adopted by U.S. army in 1980-ies. The military at that time preferred gun of 105 mm version of the British Royal Ordnance L7, also known in the United States as the M68. Such guns for decades stood on the tanks series M60 and have proven to be “acceptable”. While in the turret of the M1 was located only 55 charges to a caliber of 105 mm at a time, like the old M60 could accommodate 62 of the projectile. Even larger caliber guns would reduce the capacity of the tower to just 40 rounds.

On the other hand, the Pentagon wanted to equip the M1 to the German smoothbore 120mm Rheinmetall M256. Officials believed that this gun must be used, in particular, in order to compensate for Germany’s participation in NATO AWACS program. In addition, the big gun was supposed to be for M1 “future-proofed” and give the tank a chance to contend with newer tanks with heavier armor. In the end the parties came to a compromise. It was decided that the M1 will initially be equipped with the M68 guns, but later these guns can be replaced by the M256. Moreover, the following version of the tank, later dubbed the M1A1, had from the start supplied M256.

The issue of future demands were thus cleared, but there remained the question of the amount of ammunition. The fire control system M1 was so perfect that he could in 90% of cases to hit a moving target beyond 2,000 meters. Accordingly, the main problem was not the mistakes and the associated waste of projectiles, and penetrating power of the hits.

Just at this time, the United States studied the possibility to use armor-piercing shells of depleted uranium. This is a byproduct of the production of nuclear fuel is heavier and denser than tungsten, which made the tips of the shells. Accelerated to high speed projectile with depleted uranium penetrated the armor, which was previously considered impossible to break. In addition, the pyrophoric properties of uranium and steel has led to the fact that the projectile was on fire when armor penetration, causing the inner part of the tank catastrophic damage.

M735, standard tungsten armor-piercing projectile for tanks M60, punched 350 mm armor rolled homogenous steel (the traditional way of measuring the armor penetration). However, the projectile with a depleted uranium M833 punched 420 mm homogeneous armor rolled steel, angled at 60 degrees to maximize the thickness of armor. For comparison, 125-mm gun of the Soviet T-72 tanks fired 450 mm of armor. The most important thing was that the M774 projectile penetrated the frontal armor hull and turret of T-72 — that is, the thick armor of the tank.

Meanwhile, the “future” in the tank weaponry justified. The Soviet Union began to use a new main battle tank T-80. American intelligence believed that he, like other modern tanks such as the M-1 and Leopard 2, is moved from a homogenous steel armor to the armor combined with ceramic elements. Such a “composite” armor protected much better. The level of the frontal turret armor protection of the T-80 was equivalent to 500 mm of homogenous rolled steel, and its front armor plate provided protection equivalent to 450 mm. This meant that the 105-mm gun completely lose their effectiveness.
Advanced M1A1 tanks equipped with 120-mm guns began to go off the Assembly lines in 1985. In 1991, during the Gulf War, M1A1 fought the Iraqi T-72. In these battles the American forces used shells with depleted uranium M829A1 and the effect was devastating. The projectile, dubbed the “silver bullet” was able to penetrate the equivalent of 570 mm armor from a distance of 2000 meters, making it the standard distance is effective even against the T-80. Especially shocked that M829A1 was flying on a flat trajectory up to 3600 meters, i.e. did not go down under the influence of gravity at a distance of two miles. This gives an idea about the net power of 120-millimeter gun.

Shell M829E4, the latest generation of the series M829, presumably, is even more penetrative ability than the previous version. Its exact parameters are classified, but it was created with the expectation to overcome the active protection system, similar to those that are equipped with the latest Russian tanks. Can M828E4 can cope with the armor of the new Russian tank T-14 “Armata” has not officially announced. We only know that the army will not try in connection with the emergence of “Almaty was” to equip the M1 guns with longer barrels (to increase muzzle velocity) or larger caliber guns. Such a lack of response to the emergence of a new threat looks interesting.