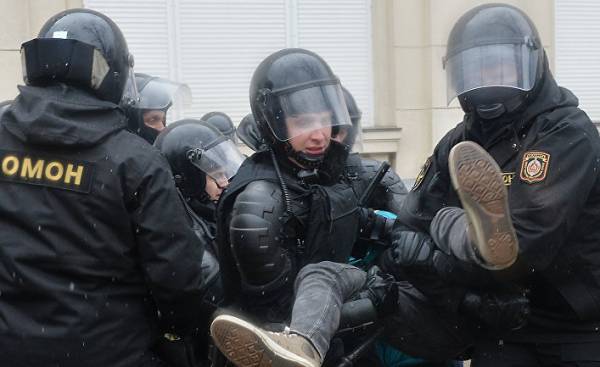 The Belarusian leadership with “Robocop” brilliantly coped with the existential threat in the form of civilians (including fallen under the sweep of Minsk on 25 March, fragile girls, old ladies with plastic bags, an old man with a crutch, which the good fellows had the screw already three). Now, after the defeat of the freedom Day, the authorities are trying to wash off, and look at the reaction of the West.

The repression of the last days of Europe reacted to the traditional “concern”, made it clear that the return of the sanctions while there is no question.

The Belarusian foreign Ministry (probably in the shower cursing the rude Martinet-security forces, because of which all subtly built the tension can go down the drain) trying to repressive inadequate to combat the terrorist threat (this is for Europeans a sore spot). The benefit of state TV are in the same boat with the intelligence agencies already safarikova horror stories (from the jeep with the guns, stupid Pruszcz through the border checkpoint to dozens of fighters with grenades and machine guns).

However, one inconsistency sums. If at first Alexander Lukashenko hints outlined for protests “parasites” Russian trace, then (apparently deciding not to tease the Russian bear) all the dogs began to hang in the Ukraine and the West. There, they say, training camps for militants, and from there the money goes for a color revolution.

And this, of course, epic fail.

Perhaps Brussels and Washington it is difficult to immediately draw out stories about the camp of militants under the mysterious Bobruisk, but certainly not to sell to the West the version that he, West, makes a color revolution.

They doesn’t need turmoil in Belarus, on the Eastern border of the EU. Swallowed Ukrainian cereal. Accordingly, the whole set of horror stories, official Minsk seems to be sucked from the finger.

Another thing is that Europe is already pretty invested in the normalization of relations with the Belarusian regime (a vivid example — dramatically changed the approach of the official Warsaw, one of which even managed to call Lukashenko “very warm person”).

To change the trend does not want to, and what to change? Sanctions have not worked. They were like mosquito bites.

Now the leader of the United civil party Anatoly Lebedko (he served 15 days) proposes to introduce targeted sanctions against the security forces. But the people in uniform in Europe it’s not like Masta due to the nature of its role. They are such a punishment as dead a poultice.

For strong economic sanctions against Belarus, Europe cannot for a number of reasons. Yes, and our population would hardly have been delighted with the impact on the economy (whatever noble objectives it was motivated), especially when live and everything worse.

By the way, quite serious Western sanctions against Russia are not particularly swayed by Putin’s regime. There are also having a crackdown on protests, like a blueprint using the methods of the Belarusian authoritarianism.

Will there be political prisoners?

The suppression of protests in Belarus, the Minister of foreign Affairs of Lithuania Linas Linkevičius commented: “If there will appear again the political prisoners, without any doubt, will again return to the issue of sanctions”.

Here it is, a red line. The administrative arrest is still balancing on the brink. Besides, as you can see, in the last days, caused a particular event, many detainees are released to statistics planting “day” rolls over.

In short, the regime, abandoning the “soft practices” at a time when they began to grow and be used by opposition protests “parasites”, and began to experiment with the dosage of repression. While it is clear that the West frowns, but swallows.

In Minsk cynically expect that due to short-term administrative detentions, the European Bank for reconstruction and development, for example, will not revise the recently adopted strategy for Belarus (which extends the interaction with the public sector).

Yes, and the IMF in deciding whether to give credit (regular talks in Washington is expected in April), is more likely to take into account the percent of coverage of the population the cost of utilities and other steps towards the exposed conditions than, for example, the fact that 15-day imprisonment of the leaders of the centre-right coalition in Molodechno the Slammer. Especially at the time of negotiations, all opposition may already shave, take a shower and cut nails after the stints.

Remains in question, “the case of fighters” (more than two dozen people, including former members of the White Legion, are suspected of preparation of mass disorders). It is not excluded that this business will descend on the brakes, trying not to cross the very thin red line.

Against scrap no reception?

Authorities apparently believe that the sacred battle against “parasites” and the other — the culmination of 25 March won. The discontented part of the people, if not very scared, then at least impressed with the power of the repressive apparatus, which was created for his taxes.

Hosted at the freedom Day parade ominous “Robocop” with special rifles for rubber bullets, gas masks, water cannons, police vans and armored cars into this plan failed. “Government for the people” appeared in all its glory police.

The political opposition is yet unsettled, puzzled. Its leaders don’t seem to have plan “B” in case of collapse of “soft practices”. Meanwhile, the price of the protests is sharply increased.

The leaders of the centre-right coalition at a press conference on 27 March said that will apply to holding shares in regional cities. But, most likely, the local authorities may not do anything. Liberalization bye-bye, now vertical not sentimental. So is it reasonable to take people under the batons and the arrests?

Another traditional date of the opposition calendar — April 26, when held in Minsk Chernobyl way. It can be foreseen that the city Council will send the applicants to the remote from the center of the area of Bangalore, where many opposition members to go fundamentally do not want. And if they do not authorize the collection of the Academy of Sciences, here’s a replay of the plot on March 25 with a high probability of a new crackdown.

Finally, there is — shall we say diplomatically — disunity of the opposition forces. Mikalai Statkevich, who plays his own game under the banner of the Belarusian national Congress, expressed the idea to use for protests public holidays 1 and 9 may. But the reaction of the other leaders (who are clearly in tension) sour. Other accused Statkevich foolishness, pedal question the safety of the participants of street protests.

For its part, the government, holding the ranks of “Robocop” and inserting a cynical conveyor belt of ships for the “swearing, waving her hands,” I tried to prove to the opposition and politizirovannost townsfolk simple truth: against the scrap no reception.

“Robocop” may not be enough

Then the authorities will track how the “fifth column” and many learned the truth. Accordingly, in the case of bursts of outdoor activity will be selected “therapeutic” doses dubinala.

It is obvious that today the ruling caste is consolidated, the security forces obedient, well-equipped (including imports), and some already and frankly I missed the usual “Home clean”. That is, until the system has more than enough power to cope with the internal threat of such peaceful protests.

Some observers compare the current repression with the defeat after the Square-2010. But there is a difference. First, the regime is clearly dispenses dubinal afraid that they will lose the Western vector and is permanently secured to the wall of the Kremlin. Second, domestic opponents of Lukashenko does not feel depression and frustration and morale is high. Discuss how to help people who are in jail and how to fight further.

In addition, the regime has never been so helpless in the face of economic problems. Socialist economy — all kaput. Moscow is no longer going to have insane resources to support fractious Belarusian friend. The word “reform” Lukashenko is bad, taboo.

In short, the authorities there is not expected the resource to the restoration of violated their social contract (we give a glass of bacon, you are Buzite).

Consequently, the population also will consider itself free from obligations under this contract. It is highly possible that, when a persistent struggle against the system, lost credibility and a significant share of legitimacy, not able to provide a decent life, will cease to be a matter of a narrow range of structured opposition.

And at some point, “Robocop” may not be enough.