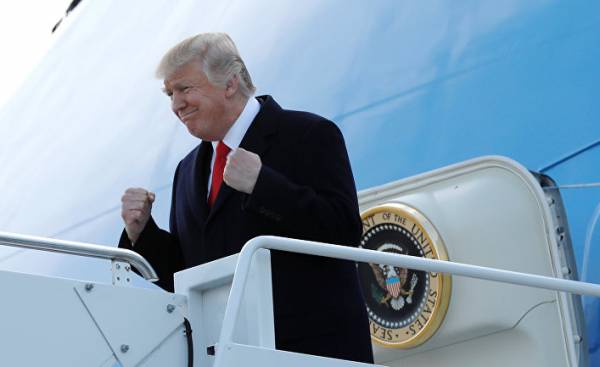 The US President Donald trump will take part in the NATO summit, which will take place on 25 may in Brussels. This was announced on his Twitter page, the press Secretary of the White house Sean Spicer, announcing the first foreign visit of the American President. According to the speaker, trump intends to hold talks with partners in NATO, “to reaffirm our serious dedication to NATO, and to discuss critical Alliance issues, including collective responsibility of allies and NATO’s role in the fight against terrorism.”

On the eve of the meeting between Stoltenberg and trump announced the speaker of NATO’s Oana Lungescu in Brussels. “They will discuss the importance of NATO for collective defence and for stability outside the Alliance”, said Lungescu.

She also noted that at the NATO summit in may will focus on “adapting the Alliance to the new security situation, including its role in the fight against terrorism and the value of the increase in defense spending and a better burden-sharing” among allies.

By the way, NATO Secretary General Jens Stoltenberg yesterday spent in Washington meeting with Pentagon chief James Mattis. “Two hours of wonderful talks with defence Minister Matthis. Serious topic, but a very warm welcome. Always happy to be with such a strong friend and NATO”, — he wrote in Twitter.

April 12: Stoltenberg — in the White house, Tillerson in Moscow

It should be noted that the statement of intent trump to attend the NATO summit has sounded next day after it became known that the Secretary of state Rex Tillerson will miss a meeting of foreign Ministers of countries-members of NATO, scheduled for April 5-6. This lack of a Secretary of state at the Ministerial summit in the United States attributed to the fact that on April 6-7 in Washington to visit will be the President of China XI Jinping. But, as it became known to the media, April 12, Tillerson will go to Russia, where he will hold meetings with the Russian leadership. And, by a strange coincidence, on the same day, as mentioned earlier, the trump will host at the White house, NATO Secretary General.

Anyway, it is important that the President of the United States decided on their participation in the summit of the North Atlantic Treaty Organization, which was founded in Washington. We will remind that last year it was planned to hold a summit of the Alliance in February of this year, but in connection with the election trump President of the United States, it was decided to postpone the meeting of leaders of the countries-members of the one world collective security system at the end of the first half.

We all remember that during the election campaign, trump called NATO an outdated organization. However, we also see that he is changing and has already more sympathetic to the Alliance, demanding that the NATO allies took seriously the requirement to increase defence budgets to 2% of GDP and took “concrete steps” to the end of 2017.

But still under the question remains, how will the American President at his first NATO summit.

On the other hand, it is clear that this summit is important for our country, because, as a rule, during such events in recent years carried out a meeting of the Commission Ukraine-NATO. This means that now the Ukrainian government should begin a phased preparation for this summit. However, the “Day” couldn’t get response from the Ukrainian foreign Ministry, which incremental steps are plans to make Kiev in preparation for this summit. On the other hand we were not given the answer to the question whether after nearly two years of absence in Brussels finally unveiled the new Ambassador of Ukraine to NATO. Because by doing so Kiev confirms serious intentions of a speedy integration into the collective security system. While in the headquarters of the Alliance do not give clear answer on two questions: how long will the summit and whether in the framework of the meeting of the COON. The interlocutors of “Day” is explained by the fact that there are almost hourly changing situation on the agenda of this summit.

“Hope for the best but prepare for the worst”

Senior Vice President of the Center for European policy analysis Edward LUCAS believes that Europe needs to hope for the best but prepare for the worst. “Sensitive” wing of the administration — men like Mattis, Tillerson, McMaster, Pence has yet to prove that they are in control of the situation. Trump continues to surprise and confuse his irritable, erratic behavior and poor information. The most probable result can be paralysis. America is unlikely to unilaterally betray their allies, but it does not provide the needed leadership, and it may not change over the next years,” he said in comments to “Day”.

Meanwhile, the Deputy Director of the Martens Centre, a Brussels Roland Freudenstein noted that the new US President will first hold a meeting with your best allies in the Alliance. “We can assume that trump is friendly and again, that NATO is important, but at the same time, it will be hard on increasing defense spending and strengthening the fight against “Islamic state” (banned in Russia organization — approx.ed.). Therefore, European leaders should calmly and without arrogance to try to convince him that Putin is a “bad guy” and the Europeans want to be good allies of America” — he said “Day”.

Fellow of the Brookings institution, Dr. Constance, Stelzenmuller expressed in the comments to “Day” view that the US will obviously expect a very specific commitments the Europeans on defense spending, especially from Germany. “But the Europeans, and so are starting to increase their military budgets, being motivated mainly by Russian revisionism. However, American expectations may be higher than they really can reach the Europeans,” she said.

On the other hand, commenting on the Ukrainian question, the German expert said: “During a recent press conference at the White house with the participation of Angela Merkel, the President of trump accepted the German leadership in the Minsk group process, as well as its format. This is bad news because it’s a bad format; but at the same time, this is good news, because it is possible to imagine much more critical of the U.S. approach to this process.”

Meanwhile, Chairman of the civic League NATO-Ukraine Serhiy Dzherdzh called the news from Washington is extremely productive and supporting transatlantic solidarity. “It is important that for the first time at the summit will be presented from 29 countries. After all, it is planned that by the end of may has completed all ratification procedures, and the Prime Minister of Montenegro, Dusko Markovic will take his place between the representatives of Luxembourg and the Netherlands according to the English alphabet,” — said Ukrainian expert.

In his opinion, the presence of a trump will be the intrigue for this summit. “Despite the fact that the US President had different views on the activities of the Alliance, his recent statements indicate the support of NATO and the subsequent preservation of the US role in the Alliance. The conversation at the same table with the leaders of the allied States will be different from the rallies of the election rhetoric. Awareness of joint responsibility for security space,” said Dzherdzh.

According to him, the Ukrainian delegation is to insist on the inclusion in the agenda for questions regarding Ukrainian (and consequently European) security. “Because who if not we should focus on the fact that in Europe there is a war, where daily kill and maim soldiers defending their homeland”, — says the expert.