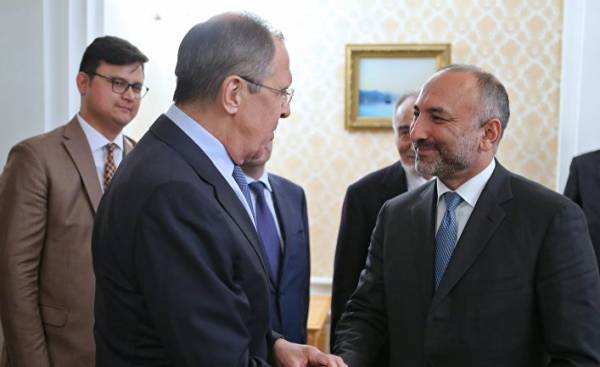 On March 17, Moscow was visited by the head of the national security Council of Afghanistan (NSC) Mohammad Hanif Atmar. Documents during his meetings with the Russian counterparts have been signed, loud statements were not made. However, among the specialists of these negotiations may have drawn more attention than if the Kremlin was visited by the President of Afghanistan, Ashraf Ghani.

First, because Hanif Atmar today has a reputation as a “gray cardinal” of Afghan politics. According to the Center for the study of modern Afghanistan (tsisa) Andrei Serenko, “evil tongues even call it “shadow President” of the country and say that today without his visa even the President does not sign any decree on conferring the rank of General. Atmar not only has a decisive influence on the strategy of the Afghan security forces, but also on the formulation of foreign policy.”

Behind the Atmar — a vivid biography and various links. “He studied in Britain and has extensive contacts among English politicians and the military. But during the reign of the PDPA (people’s democratic party of Afghanistan. — Ed.) and the Soviet military presence in AFGHANISTAN, Atmar held a fairly high position in the state security service of the DRA and was a member of the faction “brocade” in the PDPA. In the battles with the Mujahideen, he took the most active part and even received a severe wound, which resulted in the his amputated leg — like Andrey Serenko. — With the arrival of Atmar as the head of the SNB in the management of the police departments of most Afghan provinces came former Communists who served in the 80-ies in the so-called Carangue (Ministry of internal Affairs of the DRA.- Ed.)”, — the expert continues.

Special attention to the visit of such an influential “non-public” policy in Moscow due to the fact that in the current relations between Russia and Afghanistan are at a critical moment. On the one hand, for Russia the security zone on the borders of the republics of Central Asia with Afghanistan is the urgent need, stressed the Russian military expert Lev Korolkov. “Especially against the background that in some Afghan provinces observed actions, tactics characteristic not only for the Taliban as for the “Islamic state”. There are data on the concentration of IG units in the North of Afghanistan,” he said in an interview with DW. On the other hand, according to him, terrorist activities are increasingly taking place already in Kabul, we are talking about the possible destabilization in Central governance.

“The knowledgeable people surrounded by Ashraf Ghani can not fully count on the fact that the US having troops in Afghanistan, this question alone will decide. The us military is now mostly concentrated on keeping their own positions around the military base in Bagram, and in several other locations. Russia in this respect is a natural ally of Kabul,” continues Lev Korolkov.

The stumbling block — the Taliban

But here lies the stumbling block. The Moscow times recently hinted that carries out contacts with the Taliban and sees in it a possible participant in the political process in Afghanistan and help in the elimination of the main threat — ISIS. In Kabul this position was perceived as a threat to the Central government. Moreover, as DW reported an informed source in Afghanistan, in recent months, there were liquidated several commanders of the Taliban, one of which had a very noticeable impact in the North. The source reports that eliminating it looked like the attacks from ISIS, but the threads can lead to the Afghan security service, whose leadership decided to stop the development of contacts of the Taliban with Russia and to offer Moscow to proceed to the substantive negotiations directly with Kabul.

And here Atmar in Moscow. “It was purely a consultation visit. Atmar, at the request of Ashraf Ghani probed the position of Moscow on the subject of her contacts with the Taliban and the military and economic assistance to the Afghan security forces”, — says Andrey Serenko. The head of the NSC of Afghanistan met with Secretary of the Russian security Council Nikolai Patrushev, foreign Minister Sergei Lavrov, defense Minister Sergei Shoigu and acting Secretary General of the CSTO Valery Semerikov.

The head of the SNB is happy. What in return?

“In these meetings, Atmar, first received assurances that Russia is not trying to negotiate with the Taliban behind the back and against the official Kabul. These assurances, according to the guest, it’s staged — says Serenko. — Secondly, Atmar received promises of support for the Afghan security forces in the fight against ISIS in Afghanistan. In addition, he was interested in and the current attitude of Moscow to him personally. Indeed, some Russian diplomats are very short-sighted spoiled with Atmar relations in 2015-2016,” — said the expert CISA. Apparently, the consultations in the Russian capital, the head of the SNB IRA were satisfied, the source continues, DW.

In return he received the Russian side? “Atmar promised Moscow not to allow the implementation to the recently announced plans of the USA on the elimination of fleet of Russian-made helicopters to the Afghan army and police. According to Atmar, there should be two helicopters, Russian and American, that will complement each other. However, it is not clear where Kabul will take the money for the purchase of Russian cars, if they won’t give it to the Americans”, — said Andrey Serenko.

“Air is the only real advantage that the Afghan army has over the rebels. Russia now supplies spare parts for helicopters Mi-17, but for the maintenance of machines is necessary to build service centers,” — says Lev Korolkov.

As for IG, any specific agreements on the fight against militants was not reached. “Statement by Atmar that the Taliban and ISIS in Afghanistan is the same, at odds with the Russian position that the IG is clearly the “bad guys” and the Taliban — possible partners in the fight against “bad guys” of ISIS. Obviously, Kabul and Moscow and Washington have yet to agree among themselves on this matter,” — said the expert of CISA.

The attempt to bring closer the positions will be taken April 14, at the regular, already the third Moscow international conference on Afghanistan. “The Russian representatives will hold in agreement with the official Kabul, and not behind his back like it was at the end of 2016. Atmar accepted the offer on its carrying out in the wording that there should be developed a “unified regional approach” to the Afghan problem and to the model of national reconciliation in the IRA,” says the source DW.

While it remains unclear whether invited to the April conference in Moscow delegates of the Taliban — for example, as observers. “I think that the Taliban in Moscow in April will appear. The laws of the genre of political drama still require their launch on the Russian stage game against Afghanistan,” — says Andrey Serenko.