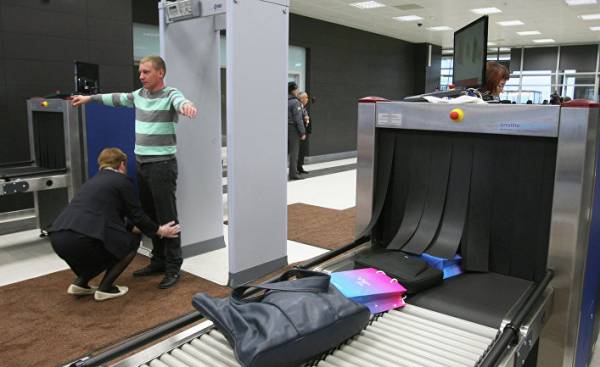 Decades in safety technologies, air transport, almost nothing has changed for passengers, but soon in this industry revolution is coming: we will be able to go to the landing, that is, directly from the street, says the correspondent of BBC Autos.

Imagine the near future: you are coming to the airport to Board your flight. You will immediately come to the front of the baggage drop and then straight to the departure gate. All — no queues for the pre-flight inspection.

High-tech security system at a distance recognize your face, then read another key information and scan your Luggage on the go — while aviation security is maintained at the proper level.

In case of detection of suspicious passengers, which is necessary to check additionally, the security service automatically receives a corresponding signal.

For those of us who are not a threat, the only test at the airport will try to resist the temptation to buy another muffin with raisins.

This is the future, but it is not far off.

Technology security at the airports have not changed significantly since the 1980-ies of the last century, but now the Ministry of homeland security is already conducting tests of the devices by facial recognition and biometric scanners that can identify suspicious characters among the passengers arriving in American airports.

It is not excluded that easily go from the street to Board the aircraft, as in the scene from the movie “total Recall”, it will be possible in five to ten years, says Steve Carolee, acting Deputy head of the transportation security Administration (ATB), the United States and is responsible for the implementation of innovations.

Pre-flight inspection at airports now is a compromise between security and speed the processing of passengers.

On the one hand, people have to catch your flight, but you must provide them with a certain level of security.

Also used in the airports the equipment should not prevent false positives. It must distinguish the truly dangerous items from similar safe, not interfering with the personal space of the passengers.

For example, at the molecular level, the honey may look the same as the liquid explosive, says mark Laustra, Vice President for international business development in the company Analogic Corporation, which produces machines for scanning Luggage at airports.

Current development Analogic and other manufacturers are able to make a revolution in the field of aviation security.

The laptop does not need to take out

One such revolutionary changes — the replacement of obsolete x-ray machines for scanning Luggage to the more sophisticated scanners scanners. While, as expected, for most passengers, this inspection is no longer associated with delays.

Computed tomography is already being used when you scan things, put in the Luggage, and now a number of manufacturers are working to reduce the size of such devices and reducing their costs so the technology can be applied to the inspection of hand Luggage, says Carolee.

Manufacturers cooperate with the ATB: the Agency evaluates the effectiveness of scanners in real-world operating conditions at airports, he adds.

At Analogic, there is a similar development called ConneCT — ATB recently started its field trials.

To speed up the process of introduction of new technologies, the U.S. Agency cooperates with structures of aviation security in other countries.

CT scanners are already used for inspection of hand Luggage in several European airports, as well as devices for detection of dangerous liquids, gels and aerosols.

For Lustre the fact that passengers in the future will no longer have to remove laptops or liquids from bags at the airports for separate inspection, is a kind of “quantum leap”.

But Carolee is confident that this is not limited — according to him, changes the very concept of airport security would lead to the complete rejection of the security checkpoints.

The inspection is canceled?

ATB are increasingly considering security as a kind of ecosystem that begins to act even before the passenger got to the airport, and ending at its arrival at the destination.

The Agency and its partners are now reflecting on how this new approach will affect the private life of airline passengers, says Carolee.

“Sometimes people forget that we provide their security, says Carolee. The checkpoints are there for a reason. We will continue to work for the safety of passengers in airports and in the air.”

“ATB is aware that the processes of development and introduction of new technologies in the United States sometimes take quite a long time,” says Carolee.

For this reason, the Agency has established a working group on innovation. Since its inception in February 2016 has already achieved certain results. But in the US, as in any other country, infrastructure optimization, airport security is a difficult task.

This equipment is designed to detect dangerous objects hidden in baggage or on the body of the passenger, says Carolee.

When a device fails (and it happens every 10-15 years), local staff ATB is necessary to choose a replacement from the list of new technological solutions approved by the Agency.

New equipment comes from manufacturers who have spent years on their development and alignment with the technological requirements and standards of detecting dangerous objects ATB. (Carolee’t go into detail because of security reasons, noting only that the equipment should be able to detect explosives.)

Previously, the only way to get the approval of the ATB consisted in passing a standardized formal certification procedures. This whole process — from testing to issuing of approval usually takes about three years, and in some cases can take almost a decade, says Laustra. According to estimates Carolee, on average, the certification lasts for five years.

And only after that approved ATB device (such as a detector of traces of explosives that analyzes smears taken from the Luggage and hands of the passenger, or already decommissioned gas analyzers or x-ray machines the CTX 5500 size of a minivan, through which passengers are sometimes forced to skip baggage before inspection) are included in the list permitted to operate the equipment.

This time gap between development and deployment explains why, since the creation of innovative products before his appearance at airports can take years.

Additionally, the standardized technology requirements of ATB not motivated producers to creatively improving security. “Technology has not really changed much since the 1980-ies, when the main task of industry was to secure the aircraft against theft,” notes Laustra.

So, many airports still have to scan hand Luggage apply two-dimensional x-ray machines, the ability to detect explosives is limited, and for passenger screening — a primitive framework metal detectors instead of the more technologically advanced microwave scanners.

But sooner or later the track will be simplified for passengers. However, biscuits in the airport, most likely, will continue to be unnecessarily expensive. Alas.