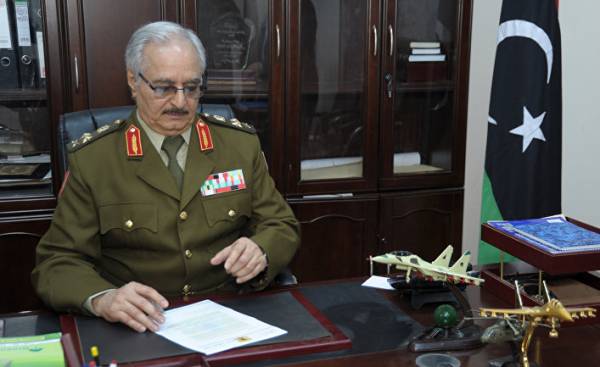 Libya — part of the General plans of Moscow to strengthen Russian influence in the middle East. Another country where you can try to get the role of peacemaker. But unlike Syria, in Libya, Moscow was not on the side of the recognized de jure government, and the military who refuse to surrender — Khalifa the Haftarot. Earlier “Apostrophe” wrote about the harbingers of the Russian intervention in Libyan Affairs. Now, these plans are becoming more obvious. But less obvious goals that Russia wants and is able to achieve.

The characteristics and motives

The intention of the Russian leadership to interfere in the internal Affairs of war-torn Libya is now evidenced not only by the regular visits, but also quite specific military plans. As reported by news Agency Reuters, the Egyptian base at Sidi Barrani, about 100 km from the border with Libya, is a unit of Russian special operations forces — 22. There will be based and Russian reconnaissance drones. The obvious purpose is the provision of support to Marshal the so-called Libyan national army of the Caliph Haftarot.

In January, the Haftarot met with the Russian military on Board the aircraft carrier “Admiral Kuznetsov”, which went to the Libyan port town of Tobruk on the way from Syria to their home waters. Earlier, in 2016, the Haftarot a few visits to the Russian Federation, met with Secretary of the Russian security Council Nikolai Patrushev. And during a meeting with the Minister of foreign Affairs of Russia Sergey Lavrov was asked about the support for his army (about why “their”, not “Libyan” — on). Haftar, according to media reports citing sources in his environment, he hoped that Russia would cancel the embargo of the UN security Council on arms supplies to Libya or send weapons through a third party. Marshall asked the Kremlin to begin a military operation against Islamist militants in Libya.

While Russia has not gone on well-trodden in Syria track. Not going to Moscow, as follows from the statements of Russian officials, and to lift the embargo, worrying for the future of weapons in an unstable country. This does not prevent, however, to assume that the hidden arms supplies to Libya was able to pass. Western media reported that at the meeting in January have agreed about the scheme in the sale of arms to Algeria.

Egyptian military denies the deployment of Russian forces on its territory. Expected, denied these reports and Moscow. But his comment to the press-Secretary of Russian President Dmitry Peskov indirect confirmed that Russia has in this country, its interests: “…some kind of excessive intervention of Russia in the Libyan case is hardly possible, and hardly advisable. Nevertheless, this does not mean that Russia is not in contact with those parties with whom it sees fit”.

Russia at the highest level have praised the Haftarot for the fight against terrorism and the preservation of the independence of Libya. As you know, in this country, the Kremlin special feelings, actively speculating on which chaos fallen state after a joint operation of NATO in support of the rebellion and the overthrow of Muammar Gaddafi.

Egypt, which recently have been closer to Russia, also supports Libya is the Haftarot, and the UAE. Important in this aspect, it seems that Haftar is essentially a military dictator, as the President of Egypt Abdel Fattah al-Sisi, and words harshly opposed the Islamist forces. So Cairo will probably connect to Russian operations, if there is one. Russia could still use the armed forces abroad without a Declaration of war and without violating their own legislation according to the decision of the Federation Council from 2015.

As written for the Russian Internet publication Republic, an expert on international Affairs Vladimir Frolov, Russia in Libya has three goals. First, to continue the revival of the status of Russia as a global power. And this includes the limitation of US influence and participation in the resolution of crises. Secondly, to oppose color revolutions, “to achieve reversibility of the Western-backed popular revolts against the sovereign dictators.” Thirdly, to restore the network of client States in the middle East and North Africa. Roughly speaking, to monetize the “fight against terrorism” due to the bases and favorable contracts for the purchase of Russian weapons, as well as the development of oil and gas fields and construction of transport infrastructure. After the overthrow of Gaddafi failed expensive contracts.

Khalifa Haftar has a rich past: from an ally of Muammar Gaddafi, he became the enemy, fled to the United States, according to some, was a CIA agent, and in Chad were preparing forces for the overthrow of Gaddafi. In other words, a reliable ally it is not.

Haftar, to be completely accurate, — the representative of the illegal Libyan authorities. “Libyan national army” (LNA) supports the so-called Chamber of representatives of Libya. She lost legitimate status after the agreement signed by the UN and with the assistance of the United States, the EU and the leading States in the region a year ago in Morocco. Then was formed the national consensus Government (NTC), headed Fayeza al Saragam, sitting in Tripoli and uniting the moderate Islamist forces and the secular political movements. Haftar and his allies from the “chamber of representatives of Libya,” which earlier in 2014, the West was considered the legitimate authorities of this country refused to recognize the NTC to resign.

Tripoli is also the unrecognized Islamist national salvation Government headed by “Prime Minister” of Khalifa Guillom (al-GAVI). 14 March in Tripoli, street fighting began with the use of heavy equipment Guella between supporters and NTC forces. Clashes in the capital on a regular basis. And PNS actually hard to maintain stability in controlled areas in the North and in the center of Libya.

Russia insists on the need for dialogue between the Government of massoglia and all socio-political movements, tribal groups and the national minorities of Libya, advocating for its inclusion in the new government. There is no doubt that he should become a conductor of Russian interests in Libya.

Although the Haftarot is not recognized by the government, the Western countries have to reckon with him, despite reports to the UN about torture and unlawful killings its military — LNA controls the greatest part of Libya, mainly in the North-East. In early March, forces of the Haftarot has lost control over bulk-oil ports of RAS lanuf and es-Cider, but conquered them from the Islamists on 14 March. It is not excluded that with the help of Russian forces. In fact, in this time interval and could be a final decision on the formation of special units.

Particular attention on Libya and the Russian activity there pay in Europe, because this country on the Mediterranean coast became a transit point for refugees and migrants from many African countries. European countries agree with the Russian idea of including the Haftarot in power. In the national consensus Government also was ready to make him defense Minister and commander in chief. However, vs was the Haftarot. Of course, with the hope that in the future will be able to count on a greater role and control over all of Libya. However, until the LDF is not the appropriate resources. And indeed the LDF in fact — not an army but a collection of groups that rely on the support of numerous tribes. Haftar heads a force that is unlikely to be ready and able to act on anything other than their native lands. And that calls for expanding military presence. For example, at the expense of Russia.

Russian military observers, with whom it previously communicated, “Apostrophe”, talked about the game of the Kremlin in geopolitics. In the beginning of a new, after Syria, military operations in the middle East they don’t believe at least because of the financial factor. So in Libya, Russia in the biggest variant will be limited to the deployment of the aircraft, but this version of them seems unlikely. The supply of weapons and advice, of course, quite possible.

“Rosneft is interested to develop their projects in the country — said the “Apostrophe” military commentator and editor-in-chief of the Russian the “Daily journal” Alexander Goltz. — We can assume that at some point the interests of the Russian leaders and the oil interests will coincide, and Russia would make a limited intervention. Interference, because of the distance and many other reasons, is strictly limited. I don’t think that is the strategic objective of the transaction, which will provide full control of the Marshal over Libya”. Besides, said Goltz, reports of Russian special forces has not yet been confirmed.

Reuters claims that the Russian foreign Ministry understand the limitations of the Libyan Marshall and would like his entry into the new government. With more radical ideas in favor of the Ministry of defense, counting on the fact that after providing massive support Haftar will be able to control the whole country.

Probably, as long as Russia does not have a final strategy in Libya or intentionally creates the appearance of its absence. If Haftar own forces is not able to take control of the entire territory of Libya, and Russia does not intend to begin large-scale operation, the intervention will only inflame the conflict and raise tension in an already unstable country. What obvious way can affect the interests of the EU that are on the other side of the Mediterranean sea. But maybe this is exactly what Russia needs?

“It should not be assumed that Russia has a coherent plan in Libya, — responds Alexander Goltz. Different interest groups have different goals. If you really cynical approach to this question, do any mess in the middle East is beneficial for Russia from the point of view that this raises the price of oil. But this is in conflict with the desire to play the role of great powers in the middle East, to demonstrate the flag — all that we see in Syria.”

Important point: Khalifa Haftar even in comparison with Bashar al-Assad is not a legitimate ruler. In the eyes of the US and the EU Russia’s efforts to destabilize Libya will look like another attempt to spit in the face of the West that obviously does not play in favor of the restoration of relations.