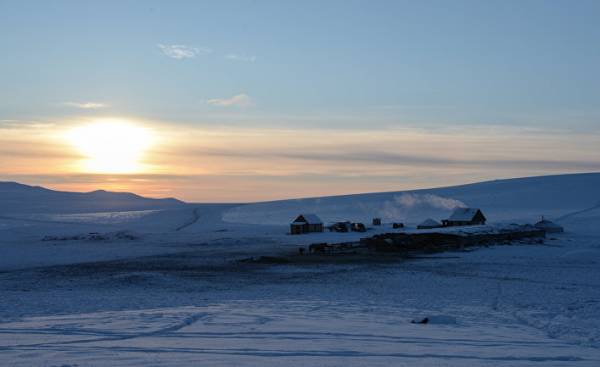 Four-year-old girl, who went into the cold on foot to walk a few kilometers along the Siberian taiga, to call people to the aid of their ailing grandmother, became a hero in his native Republic of Tuva. Meanwhile, against her mother was a criminal case.

Sapana Salchak lived with her grandparents on a secluded shepherd’s Parking lot in the middle of the taiga forest, close to the Mongolian border. From the Parking lot to the nearest village more than 20 kilometers, and the closest neighbor is eight miles away.

In February, the girl woke up in the morning and found that her 60-year-old grandmother lying in bed without moving. After talking with her blind grandfather, she decided to go to the nearest Parking lot to get help.

Sapana took a box of matches, just in case she would have to start a fire, and went, when it was still dark, and the temperature stayed at around minus 34 degrees. It took her a few hours in order to overcome eight kilometers through the snow along the river. Fortunately, she’s not stuck in the snow, the depth of which in some places reached up to her breast, and did not meet wild animals, often attacked the cattle that held her grandparents.

“Wolves Tuva just flooded. They bite cattle herders from them moan. In the dark it was easy to stumble upon a flock,” said Simon Rubtsov, head of search and rescue units Tyva search and rescue team in an interview with “Komsomolskaya Pravda”.

After going eight miles over the taiga, Sapana almost did not get the house of their neighbors from behind the bushes. She could pass if she hadn’t said the neighbor. Neighbors immediately summoned doctors who examined the girl, rushed to the aid of her grandfather and grandmother. There they found that my grandmother died of a heart attack.

Sapana told “Komsomolskaya Pravda” that she was not afraid to go in the woods alone. “I just went, went and came,” she said. But she admitted that she was cold and was very hungry.

Although Sapana caught a cold while walking through the forest, it quickly got out of the hospital, and now she lives in a social centre, where she has just celebrated his fifth birthday. The local press called her a real hero. “People inaccessible Tere-kholsky kozhuun not surprised extreme stories from their past life. However, the incident a few days ago, surprised even veterans of Kungurtug — kaguongo center,” wrote the Online edition of the Tuva of the heroism of Sahlani.

The mother and stepfather are now Sahlani along with his flock in another area. The Ministry of social policy has allocated a free ticket to the courageous girl and her mother, who must return from its Parking lot in may.

But on Sunday, March 12, investigatory management of Tuva has opened a criminal case against Eleanor Salchak, mother Sahlani, on charges of abandonment of a minor in danger. “She knew that the elderly are deprived of the opportunity to take steps to ensure the safety of the child”, — says the official statement of the office. If the mother is found guilty, she could face a prison sentence of up to one year. The office also reported that it checks what actions have been taken by the local social authorities.

In an interview with the Guardian Si Mongush, an activist and journalist from the regional capital Kyzyl, said she was shocked that the elderly people did not have Internet and even a simple phone, because the Minister of defence of Russia and a native of Tuva Sergey Shoigu had previously insisted on an archaeological dig in an ancient fortress located in the territory of the district.

“Even in Soviet times, the shepherds of Tuva was [material] privileges and telecommunication, she said. — And now, in the 21st century, a four year old child has to walk through the forest, because there is no connection. This is incredible. It is a crime, but not from the girl’s mother, and by the authorities”.

The sparsely populated Tuva Republic in whose territory are forests, mountains and plains, famous for the art of throat singing and ancient shamanic practices which coexist with Buddhism.