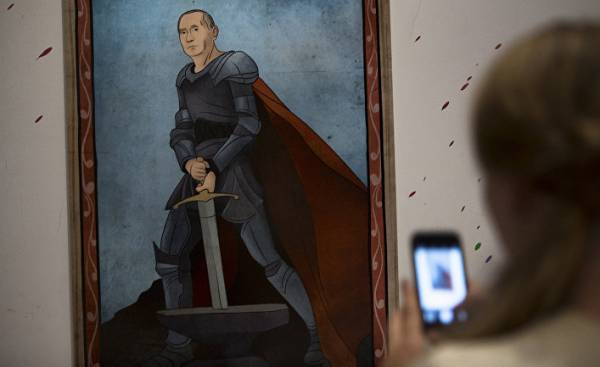 This year marks the centenary of an event that left an indelible mark in the history of mankind — the bloody Russian revolution of 1917. She destroyed the old tsarist Russia, and transformed everything known at the time of the world. Before us is a chilling story with millions of corpses that no one has been able to appreciate the true scale, because it will need at least one century, to approach the understanding of this “big Bang” and the accompanying utopia.

The events that split the world in half, which remained divided, today received a new name — the name of the person, possessing the same authority that once the kings — Putin.

Boris Yeltsin brought him to Moscow in one of his drunken nights with folk songs. It was the man from Lubyanka, which housed the terrifying state security Committee, more commonly known by the abbreviation KGB.

Vladimir Putin was born in Leningrad, formerly St. Petersburg, was renamed during the civil war in Petrograd, but after the revolution in Leningrad. The restructuring returned him to the ancient Imperial name.

This city of stone was built on the swamps, and you could tell that he was not born, but created. First dug a wide trench, which will turn in Nevsky Prospekt, as wide as the bed of the Neva river, littered with corpses. Ayn Rand (Ayn Rand) in the book “Those who live” tells how thousands of peasants were brought to marshy land, where he survived only mosquitoes to build a city, and “short spring tulips and hyacinths that bloom here smell like death.”

Putin’s grandfather was a cook of Lenin and Stalin, his father during world war II fought with the Germans in special parts. Vladimir studied law, was admitted to the Soviet secret service in 1975 and was sent to the GDR as an agent. Upon return became assistant and Deputy mayor of St. Petersburg, and in 1996, Yeltsin called him to Moscow.

For some four years of Putin’s life has changed dramatically. From the shadows he came into the light. In the Kremlin, he invented a new biography, new features, restrained gestures, political opinions, diplomatic wisdom, and Vladimir was able to master all the secrets of human power, following the footsteps of the powerful kings of the past.

An expert who knows what is the corridors of the Lubyanka, says: “brand Image “KGB” — is a strong corporate spirit, sports and ascetic way of life, a cult of state” and, in the first place, the tendency to divide people into friends and enemies of the state”.

In this sense, Putin did the right thing. He didn’t ask any questions, anything not hinted and the most important and valuable — collected, working like a beast, a lot of dirt on opponents of Boris Yeltsin, thus protecting him from suspicion of corruption.

Putin has the charisma and personal charm that inspire trust. He says little, only what is necessary, and much listening. Because intellectually it is not very developed, this silence gives it a profound kind that raises his prestige and strengthens leadership.

His most effective method was the war in Chechnya. And it brought result. While Europe and NATO mercilessly bombed Yugoslavia over Kosovo, and Milosevic was declared a war criminal, Putin received from the West support, expressed in non-interference.

Then there was a reason it was necessary to save the weak Russian democracy. Then Putin remained at the helm and became the new king, having the sole authority.

In just released in Europe a book called “the Romanovs” which at 800 pages tells the story of the Russian tsars from 1613 to 1917, there is an epilogue explaining the meaning of the words of Marx: “History repeats itself, first as tragedy, then as farce”.

The author, Simon Montefiore Sebag (Simon Sebag Montefiore), writes that after 1917 there is no king will rule Russia, and those who shot Nicholas and his family took and mixed the prestige of the Romanov dynasty with what in German is called “Zeitgeist”, “Zeitgeist”.

Once Vladimir Putin was asked about the most unforgivable betrayals in relation to Russia. And he replied that they made Nicholas II and Mikhail Gorbachev: “let Russia into the hands of a handful of deranged madmen”. And added the phrase that appears today in the light of his total power: “I will never leave the post”.

In the current geopolitical situation, when it is the fall of the Berlin wall, created the European Union and NATO, the new US President Donald trump would have to know with whom he communicates in the former Soviet Union. The Romanovs are long gone in history, but the absolutism of Moscow still prevails in the Kremlin.