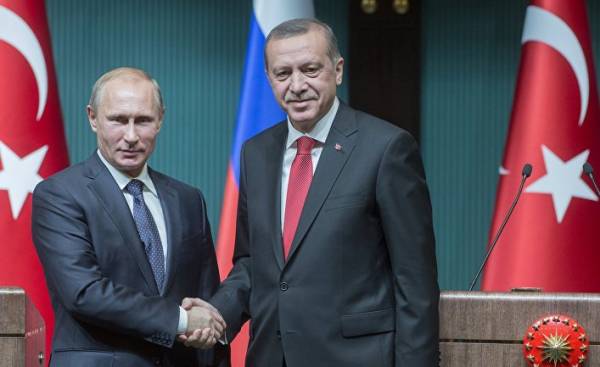 Since relations between Turkey and Russia entered into the process of normalization, the meeting of Erdogan and Putin have become the new classics of the genre.

The two leaders will meet for the fourth time in six months. To what extent this will affect the agenda of the fight against ISIS (banned in Russia — approx. ed.) in Syria and Iraq is a subject of much curiosity.

It becomes clear that the tripartite meeting, which the head of the General staff of Turkey, Russia and the United States held in Antalya, considered the confusion that emerged recently in Syria, particularly around Manuja.

After completion phase of the operation “shield of the Euphrates” in al Bab the forces of the Syrian opposition, mainly the Free Syrian army supported by Turkey, turned East and headed into Manbij. Turkey also announced that a new purpose — Manbij and raqqa. But recent events show that Turkey will not be easy to achieve these goals.

To reach Raqqa, need to go through Manbij. To go through Manbij, supported by Turkey forces will have to face and even fight with controlling the region “the Democratic forces of Syria”, which is basically the Party “Democratic Union” (PYD). Such a clash in the interest of neither Russia nor the United States.

USA quite openly talking about the fact that in the framework of operations against Raqqa, which is scheduled to commence soon, they will work together with the PYD and will not destroy the Union, we continue with these forces in the fight against ISIS. And Russia, knowing the position of the United States, does not want to allow such a development, which can cause anxiety USA.

Therefore, Russia is taking steps in the direction that PYD is not faced with the Syrian opposition forces, advancing from the West, and not weakened in the fighting. The announcement of Russia that the PYD left the West Manuja and the territory took control of the forces of the Syrian regime, shows this clearly. Russia, on the one hand, calms the USA, with another — provides care PYD from Western Manuja, as like Turkey.

Obviously, we are talking about a certain partnership that occurs on the battlefield in Syria between Russia and the forces of the Syrian regime, on the one hand, and the United States, the PYD, on the other, to jointly fight ISIS. Okay, but where is Turkey in this fight?

Turkey wants to join the operations against Raqqa and support the fight against ISIS. But does not want the PYD participated in this operation. While the USA is establishing an operation in raqqa mainly based on elements of PYD. And I think Turkey can support the operation only on these conditions.

Turkey wants to Manbij was cleared of the elements of the PYD and the forces retreated to the East of the Euphrates. She wants in their place came the forces of the Syrian opposition, with which it interacts in the framework of the operation “shield of the Euphrates”. But care PYD from Manuja fast enough. Moreover, release of the territory is occupied by forces of the Syrian regime, supported by Russia.

Among the information leaked to the international press, there is information about that at the meeting of heads of General staffs in Antalya failed to overcome the concerns of Turkey on these two issues.

In fact, in the Syrian issue, Turkey has got a chance to be a player who is forced to forget about initially done, and as a result of the moves made in recent times with both diplomatic and military points of view, made a significant contribution to resolving the problem.

Thanks to the operation “shield of the Euphrates” Turkish-Syrian border has been cleared of ISIL elements, posing a threat to national security. Started the process on placing the Syrian refugees in established safe areas. Liberated from ISIS territory has expanded to the El-Baba, the unification of areas Manuja and Afrin, which was seen as another security threat for Turkey was thwarted.

On the other hand, the truce, the guarantor of which Turkey made with Russia, and held in Astana, the talks between the Syrian regime and the Syrian opposition have given an important diplomatic advantage from the point of view of facilitating talks in Geneva.

All these events increase the likelihood of a perception of Turkey as a constructive player in the region. Moreover, you can even see that Turkey takes the position of main power, acting together with Russia and USA in the region.

This provision will not be an adverse effect if taken in further steps not to distort the balance sheets, which, as is clear, line between Russia and the United States. Such actions may not only lead to the destruction of emerging balance sheets, but immediately to call for confrontation with Turkey or with Russia, or US, or both of these countries.