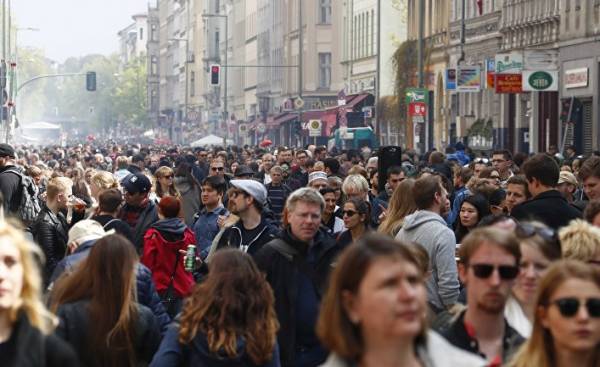 Receiving the nickname “Republic of Martania” the district extends North from located in Marzahn, on the outskirts of Eastgate shopping centre. The bottom of the faceless towers that built the regime of the former East Germany by example of Moscow and Warsaw, is a Mix-Markt. In the supermarket speak Russian and buy the Russian: from the ready-made soups to cakes and bottles of vodka in the shape of Kalashnikovs. The set costs 100 euros. At the entrance there is a small ad in Russian with offers evening classes in mathematics, the services of psychics and advice of a lawyer who specializiruetsya on payment of the Russian pensions. Outside dealer puts Souvenirs in the window mug with a picture of Vladimir Putin (in sunglasses and clothes in the style of James bond) or just national flags. Neighboring travel Agency deals with the paperwork those who come or want to leave. Here you can live, not knowing a word of German.

“The first time it produces a shock,” laughs Dmitry Gaidel. This 29-year-old native of Leningrad lived here since 1993. The social democratic party sent him for the conquest of the electorate of Marzahn. “If you speak Russian, you say in Russian,” — says the young candidate for the parliamentary elections (September 2018). “There is not such a secular society, as in Charlottengrad,” he jokes. Charlottengrad — the nickname of a small Russian area in the prestigious district of Charlottenburg in the West of the city. There for more than a century lives the old Russian community and the Nouveau riche, who founded the company in Berlin. In Marzahn, the Russian Germans are more closed and modest life.

The figures are approximate: the Russian-speaking population accounts for about 30 thousand people in Marzahn and 4 million in Germany. Politicians have long ignored them, but now they are of interest to them. In local elections in the autumn of last year the radical party “Alternative for Germany” distributed leaflets in Russian. “We stand for a important for this community values: family, patriotism, order…” — says the head of the Berlin office of ADG Pazderski Georg (Georg Pazderski). In addition, the party advocates a change in foreign policy towards Russia and in particular for the lifting of economic sanctions. “Although the annexation of Crimea was illegal under international law, it can be understood,” emphasizes Pazderski. In Marzahn Vladimir Putin is popular. “It gives resistance to the Americans,” — explains at the supermarket a young man with distrust and pride in his voice. This is not different wellbeing area of ADH scored in September to 23.3% of the vote, behind the Left party, but beating the Christian democratic Union and the SPD.

For many years foreign policy was practically not interested in living in Berlin Russian. However, in 2014, the annexation of the Crimea got into the discussion, dividing families as a real conflict of generations: on the one hand, integrated into society young people, with the other clinging to the culture of the parents. And to feel it you don’t even need to be in Marzahn. Evgeniya Sayko here for six years, lives in Mitte, in Central Berlin, and is hampered by a complete lack of understanding when he’s in his native Tomsk: “one evening over dinner talking about the Crimea. Cousin asked me in surprise why I don’t think it’s for the best. I was the only one who thought so”. Since the beginning of April, she leads a research project, which focused on the differences in perception of values in Russia and Germany. “The concept of democracy is understood in two countries in different ways,” she says.

In a closed Russian community of Berlin begin to doubt: distantsirovaniya from Vladimir Putin to Angela Merkel, Germany, which opened its doors to refugees, but “did not take as much effort for us”… “Why is the Brandenburg gate did not set the backlight in the Russian colours after the April terrorist attack in the subway?” — does not hide discontent young man in Mix-Markt. At the same time has honored the victims of the terrorist attacks in Paris and London. From St. Petersburg there is no partnership with Berlin, justified in the mayor’s office.

The relations between Germany and Russia is now worse than ever. Therefore, Moscow relies on other channels in a bid to attract attention to itself: the German media wrote about Russian funding of ADH, and Vladimir Putin with military honors took Seehofer Horst (Horst Seehofer), leader of the CSU and criticism kantslerin. Pro-Russian lobbyists in turn expand your network of influence in Berlin. In July last year, one of the staunchest allies of the President Vladimir Yakunin has formed dedicated to the “dialogue of civilizations” expert group. In addition, there is the all-German coordination Council of Russian compatriots, which is officially tasked to protect the Russian culture and to maintain a Patriotic link.

The Russian community fully showed itself, the Germans have a Mix-Markt in January 2016. Then people defended the “Lisa”. The demonstration gathered about 600 people, who demanded to “protect their children” and provide them “equal rights” with the Germans. January 23, another event was held under the Windows of the office of the Chancellor. 13-year-old Lisa was abducted and raped by three refugees. The police refused to disclose details of the investigation and decided not to pursue it… the Story has spread like wildfire across Russian social networks (in Berlin especially popular “Classmates”) and in particular in the group of Mix-markt, which has tens of thousands of members. The first channel of Russian television (watching it all in Marzahn) rebelled suspicious inaction of the authorities. Finally, in the ranks of the demonstrators infiltrated the ultra-right. Only here, the whole story was a fiction: the girl was never kidnapped or raped, as shown by the result. Example of manipulation of public opinion.

The lack of direction

“The Russians have a bad experience with the police, which in their country often corrupt. They have in mind has established just such an idea,” says Alexander Reiser (Reiser Alexander) about the passions around “the works of Lisa”. He created in Marzahn Association Vision to learn the history of Russian migrants and to assist the newcomers. “Russian TV uses a very effective means of propaganda and rhetoric about the decline of Europe,” he adds. One problem this strategy is accurately performed: sow doubt. “The Russian Newspapers have a political orientation, but the Germans, too, — says Sofia have tea, “Natalia” in Marzahn. Propaganda exists on both sides”.

This lack of guidance is a reflection of the fragmented identity of Russian Germans, who equally belongs to Russia and Germany. They represent a particular form of immigration, and their history goes back to the distant past of both countries. Most Germans are not familiar with it, although one of the main stars of the country Helene Fischer (Helene Fischer) is one of them.

It all began when Catherine II in the XVIII century. To occupy unoccupied Volga lands, the Empress invited the German settlers. She promised them the right to keep the faith and language. So there were “Volga Germans”. There were about 30 thousand. Nearly half a century later Lenin offered them autonomy in the USSR. In 1939 on the territory of the Soviet Union, there were about 1.4 million Germans. Nevertheless, the war changed everything: Stalin read that they can go on the side of the Nazi regime. In 1941, the dictator signed a decree on deportation to Siberia. Discrimination lasted until the collapse of the Communist system in 1991. Then Chancellor Helmut Kohl asked them to return to their historical homeland.

Alexander raiser, was among those who decided to leave and who received a German passport before arriving in Germany. He didn’t know where to go, and settled in the East of Berlin on arrival in 1996. “In Marzahn were a lot of unoccupied housing: after the merge, the residents moved,” he says. The German dialect that he learned in the family in a small village in the Tomsk region allowed him to get out somehow. But he still was not easy. “No one in the former GDR knew nothing about our history and repression in the USSR.” Anyway, his family moved to him: suffering from diabetes father needed not available in Russia care. “In Russia we have always felt themselves Germans, but then everyone called us Russian — he sighs. — This is the essence of our pain: we seek reconciliation, seek to belong”. Russian Germans consider themselves Germans, more than indigenous Germans. However, the gap between their two homelands is getting wider.