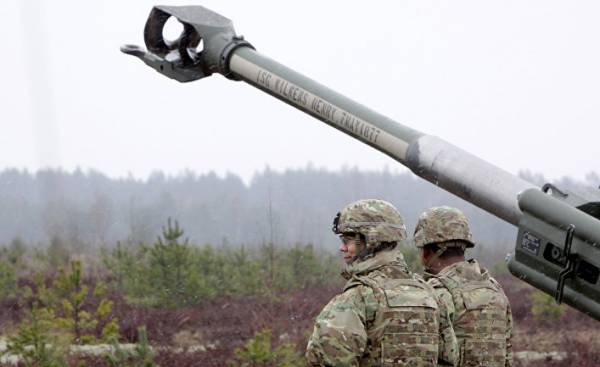 Local and overseas generals and politicians have warned that NATO soldiers arriving at the post in Latvia, Lithuania and Estonia, is danger. No, it’s not the mountains, ravines and a forest. And not the BNP, trying to climb over the fence to the barracks. And not even the “polite people”, for three years in absentia frightening power in Eastern Europe.

German, Spanish, and canadian soldiers still didn’t do anything. Newspapers and portals have not written anything. However, to readers and journalists in advance brought the idea: to write critically about the antics of foreign soldiers and officers — means “to sow doubts” and “to wage propaganda.”

About NATO in the Baltic States should be written like a dead man: either good or nothing.

More interesting, however, is different. In the NATO do not disdain to engage in “malicious information.” Here we can recall the incident in the Old town, when discharged to the defense of Latvia British soldiers on the bench drunk broke the nose of the defendant Riga. Sources in NATO promptly granted, and the British media quickly spread fake news that in the fight with a broken nose was the Kremlin provocateur. Later the lie was exposed, spoons were found, but the sediment remained.

And again. The noses and jaws of Riga and other Latvian residents to protect is becoming increasingly difficult. Foreign military group in the country is growing. Professional motivated military of Latvia sent away from the country — in Iraq and Afghanistan.

In their place by the summer is planned to deliver poorly versed in the local situations of armed Albanians and Spaniards. It is clear that the people defending their homeland (in this case Latvia), is worth a dozen Albanians. And Vice versa. What if voluntarily weaken the defense of the country, exchanging Latvian soldiers in foreign?

Or think about it — it means “to sow doubts” and “start a promotion”?