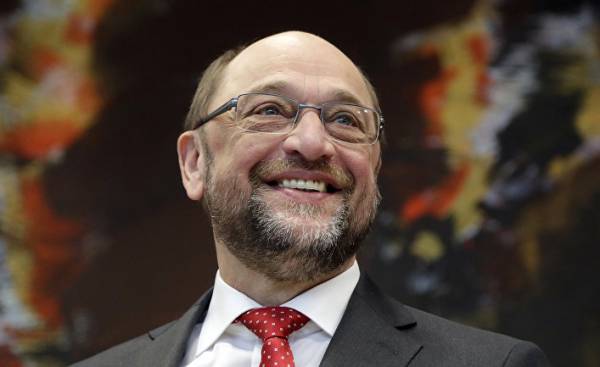 If the German voters chose the Federal Chancellor directly, today it would be Martin Schulz (Martin Schulz), and the head of the German government for the past twelve years Angela Merkel (Angela Merkel) lost to social Democrat in the presidential race. What is the reason for the German disappointment in the current government?

The rating of Martin Schulz once again inspires the Social democratic party: if election were held tomorrow, the right to form a new German government would have received the recent President of the European Parliament and not seemingly until the immigration crisis is permanent, the current Prime Minister of Germany Angela Merkel. According to a survey Sonntagstrend (“the Tendency of the resurrection”), his Institute of public opinion research Emnid regularly prepares for the weekly Bild am Sonntag, the Social democratic party for the first time in the last decade ahead of the conservative CDU/CSU: “red” sympathetic to the 33 percent of German voters, “black” — only 32. The potential Union of social Democrats, Left party and Green according to the results Sonntagstrend slightly ahead of the conservatives, and right populist “Alternative for Germany”, gaining 9 percent of the vote, showed the worst result over the last year. According to other polls, they were prepared sociological institutes Insa, Forsa, Infratest dimap, the social Democrats gaining slightly fewer votes than the representatives of the Christian democratic and Christian social unions, but the transition to the individual, the social democratic candidate for German voters seem to be much prettier than Angela Merkel.

“St. Martin” or “the Messiah of Porcelana” as occasionally referred to Martin Schulz in the German media, forcing the audience to listen his speech to clap furiously, ratings — explode senior colleagues in the party to cry with happiness. The intention of the new spiritual leader of the SPD (and 19 March, Martin Schulz, will be officially) to base the election campaign of his party’s social policy is expressed very clearly. Recently, Schulz has promised to change several provisions of the “agenda 2010” program of social reforms adopted under Chancellor — the social Democrat Schroeder (Gerhard Schröder). In particular, the candidate of the SPD proposes to extend the time for obtaining benefits for lost employment for people of advanced age, so they wouldn’t have a year and a half to receive social assistance. This is a direct appeal to the German middle class, for the favor which the beats and the party of Angela Merkel — but while conservatives refrain from specific promises, giving the social Democrats the opportunity to be “too left” in social issues. None of the leading parties in this case have not offered effective recipe against the most important of them, who really cares a lot of the Germans is frightening and very likely reduce living standards in old age.

Returning from a lobby European politicians Schultz was created to participate in the election campaign: he is a fiery speaker and a successful rabble-rouser. The rating of the SPD, while Sigmar Gabriel (Sigmar Gabriel) rarely exceed 20 percent, today improbable rolls. The rapid rise in popularity of the “red” candidate does not mean that conservatives have no place in government, with a majority of Germans still wish to see in the country’s leadership of a broad coalition composed of the SPD, the CDU and CSU, but headed by a new person.

One gets the impression that the country is tired of Angela Merkel — even that part that is ready to forgive her open borders 2015 or just don’t see anything wrong with bulk replenishment of the population of Germany representatives of other cultures. In the background of this fatigue that voters are ready to support anyone of any suitable candidate, and Schultz, who has no higher education, no experience in state administrative structures, it seems a great alternative — not only the traditional voters of the social Democrats. Praise in his address the undoubted advance that Martin Schulz has yet to fulfill. While the candidate manifests itself as a excellent election strategist, but for his zeal in the sky ratings still not worth anything but the dissatisfaction of voters with the current situation.

To assess the chances of the parties, is to wait until the real campaign promises and party programs: the conservatives will present their abstracts only in the summer, the social Democrats, likely in the spring. The problems of conservatives in connection with the person of Martin Schulz still pretty foreseeable: the General Secretary of the Christian social Union Andreas Scheuer (Scheuer Andreas) formulated the danger posed by the “Saint Martin”, most literally: “Candidate Schultz has not yet said anything specific. When he starts talking about specific things, the euphoria quickly followed by a hangover.”

However, to repeat the record of Helmut Kohl (Helmut Kohl), who ruled Germany for four terms, Angela Merkel is going to see “candidate Schulze” extremely serious opponent — serious is the fact that it is completely not similar to itself for decades sakalavas in the political struggle at the highest level. Opponents from the Chancellor will not be: the question of how the upcoming fight with the former President of the European Parliament, Merkel diplomatically replied that “while all their rivals took it seriously.” But enough of the Chancellor her usual calm, rational approach and strong belief in their own right for success? Or the head of the government will have to make an effort and translate, as does Martin Schulz, the election campaign in the emotional plane? If Angela Merkel and her advisers will come up with a radical way to “refresh” the human face of the Federal Chancellor, the record nick has a good chance to resist — even though the current popularity of the SPD may not be enough for the next six months that remain before the election. Those who sincerely hoped that the diligent student of Helmut Kohl will repeat his success have many reasons for concern, sharing with Angela Merkel confident that the fight for a fourth term will be the most difficult of all political races in which she had to participate.

In Kabul, police fired on a crowd of demonstrators