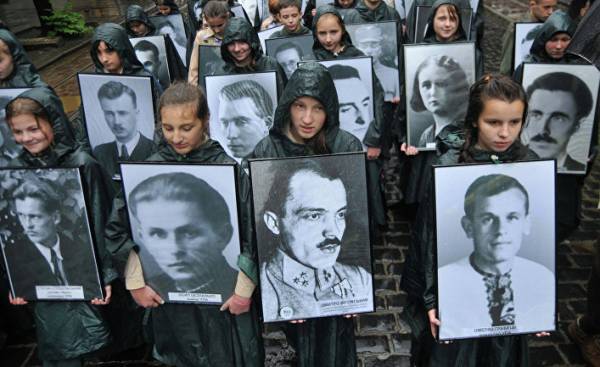 Historian Georgy Kasyanov said recently on the painful topic and its messages were multiplicatively social networks. Quoting interesting thoughts made me think and forced to speak. In line with the long-standing controversy not only with mister Kasyanov.

First, about allegedly unreasonably high for the glorification of the UPA and organization of Ukrainian nationalists (banned in Russia organization — approx. ed.) that gave birth to this structure. “The problem is that the UPA, and the OUN is a radical nationalist movement in history which except unconditional heroism and sacrifice has a dark page, not allowing you to represent them exclusively as noble knights,” — said Kasyanov, returning us to the line of the Communist party of the USSR.

There were also confident that the soldiers who kill people in an overseas business trip, noble warriors, nationalists, defending the place of residence. Don’t understand all the time: the farther soldiers from the homeland, the more chances of him to fall under the Tribunal of history. What happened with the Wehrmacht and the Soviet Army, whose crimes against humanity described in many encyclopedias of the world. The UPA looks like a domestic dog on the background of these wandering the world man-eating tigers.

Based on people’s love for the army are not so much the purity of their uniforms, as criteria of the validity of action — the withdrawal of the “Nibelungenlied” and the subsequent history of the wars. I’m not going to talk about the security actions of titled knights of Siegfried and Gunther (let them live in the literature). But seriously, everything is known to us of the liberation movement and war, not without radicalism. Know it today the soldiers of the Irish army (Irish Army). The same can be said about the anti-colonial struggles of the Hindus. Army presidencies (Presidency armies) are not fans waved in front of Bengal, Madras and Bombay population.

The Royal Hungarian Honved, as the UPA fought on the side of the Wehrmacht against the Soviets, but also on our territory, making the Hungarians invaders. The Boers attacked the British and did not stand on ceremony with the prisoners, but remained as an example of valor for the South African national defence force. The British cherish the traditions of their battles in the Orange Republic and the Transvaal, the tide of their soldiers in bronze for memorials. And this, incidentally, soldiers, shonassie civilians in concentration camps.

Armies are worse, I mean far from the nobility of operations. For example, the Russian, who inherited the whole bloody history of enslavement and deportation of the peoples of the tsarist Empire along with the Soviet Union. But I do not remember the wishes of the historians forget about the Russian, Prussian, Indian and any other of the existing armies. In some places, and with the Wehrmacht in the heart of the live, keeping under the pillow of the swastika with the stars.

And we have nothing to be ashamed of. Yes, he fought on the side of the Germans, poles, Hungarians, Bulgarians, Romanians, Russians, Japanese, Frenchmen, Spaniards, Italians, and other, and other, and other. But fought against the Soviet Army, which was not able to do all of the above mentioned peoples, except the poles. Ian — the only thing that connects modern APU previous generations of defenders of the Motherland. The army fought on two fronts, within the borders of Ukraine, against the most murderous regimes of the twentieth century … and deserves honor and recognition.

Today, the Polish army soldiers stand guard at the tomb of the unknown soldier, where the obelisk is carved the “Armia Krajowa”. This is the army, I fought and engaged in ethnic cleansing in our land. But the poles, like all peoples, samo jest na pierwszym courses. Its why we should be on another? Why still with the scientific view repeated nonsense propaganda character?

It would be good for all of us, regardless of the subjects of the research, to look at its history through the heart of the people, not the magnifying glass of the investigator. Let the UPA is not a symbol of heroism for all Ukrainians. About his army we know little, for many reasons. In Ukrainian and English languages on the Internet “will give” you a version on request. The same in the Russian language will lead to absolutely opposite result. It is clear why. But we will draw conclusions later. Now let’s go back to interview of the historian.

That said, the cradle of Ukrainians Kasyanov. “Let’s remember, where and how did the Ukrainian movement. Where he published the magazine “Basis”? In Saint-Petersburg. Where were grouped the ukrainophile intelligentsia, created a territorial and cultural idea of Ukraine? In various Imperial institutions — scientific societies, universities, Zemstvos, etc. in fact, the Empire became the basis for the infrastructure of the Ukrainian national movement”, — informs the readers of my counterpart with historical education.

The idea, frankly, is popular in the circles of the leaders of the Empire. Indeed, for the Ukrainian intelligentsia was involved in the entire infrastructure and the state apparatus from St. Petersburg to Sakhalin. Hetman Pavlo Polubotok was carrying a cultural idea in the fortress, and Taras Shevchenko in Orenburg, Vasil Stus in the Perm region, leaders of the OUN in Norilsk. But, of course, the magazine “Basis”, the publication of which deigned to allow Kulesa Third gendarme administration for a period of one year, an important milestone in the millennial history of the Ukrainian movement. Don’t be Petersburg and the gendarmerie, how would we educate in times of local barbarism?

I know from my own experience. When I was released from the military faculty of journalism in Lviv, Commission on the distribution of the Colonel, listowski my own business, asked: “Where you want to serve, Lieutenant?” I accepted then the expression: in the Ukraine! That sent in Transbaikalia, where Kasyanov, came to me the love for the Motherland. So, grouping ukrainophile intelligentsia’s just not in Kiev was created, and in places not so very distant.

Thirdly, the myths, as such, which was devoted to an interview with historian Kasyanov. One French manufacturer of cognac more than a hundred years uses make up a story that Napoleon Bonaparte took with him to the island of Elba the most expensive barrels with brandy alcohols. (I have not found the Emperor’s wealth in a compact package). The story is sewn with white thread, but has helped the company earn a lot of money, and lovers of cognac to feel like emperors. The normal myth, such a dime a dozen on the plains a chronicle of life.

Fiction does not bring harm if they inspire a humble being and raise the self-esteem of people. Another thing is mythology created specifically for the exaltation of one nation and the humiliation of the other. We understand why people are fed myths about the betrayal of Mazepa, but do not use facts about the sadism of the Generalissimo Menshikov, the foolishness of Peter, the cruelty of Ivan the terrible and Marshal Zhukov. On the contrary, bloodthirsty despots erect monuments. Is it possible only with an interest in history to explain this phenomenon, and constantly fuelled the myth about the UPA?

Compare the intensity of the discussions about the UPA and ROA millions? It’s inversely proportional to the ratio of the number of fighters. Just recently finished a page, as Vlasov fought against Hitler, April 1945. Managed to catch live for a few hours. Why RAID UPA fighters examined under a microscope, and military operations the red Army, the murder and deportation of entire peoples is not taken into account?

Yes, because, having undertaken to tell the history of his people, we are forced, as if ancient frescoes, scrape off the layers of whitewash painters, employed by different masters. The process is long, and very unpleasant for many artists draw on top of the originals of his paintings. That’s where battle lines are drawn between myths and truth. And if it is attended by historians, may act or not on the side of myths, either on the side of its myths.