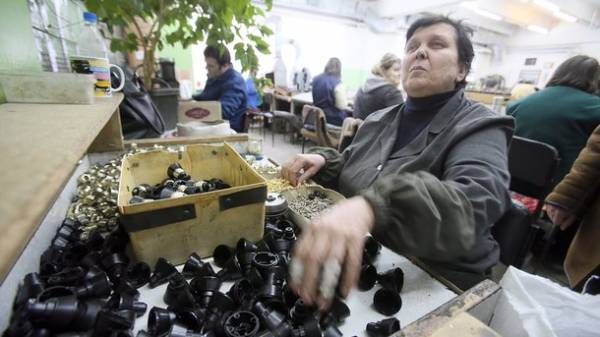 Albeit small, but still part of Ukrainian exports are goods produced by the visually impaired and blind people. Cartridges for lamps, automatic electraprobe, many types of switches, sockets, clips, electroclinical and even elements of electronics for railway locomotives — all these millions of copies produced for export to Russia, Belarus, Kazakhstan and Moldova.

Some of the plants where such people, despite the economic difficulties, and are now trying to increase the volume and range of products to stay afloat and to give the opportunity to earn for those who are not able to work on conventional plant.

“Today,” visited one such company, which employs more than 700 people, more than half of them are either visually impaired or completely blind men and women. It is located 90 km from the capital, almost in the center of the White Church. It produces more than a hundred different products, from simple wooden clothespins for linen to complex electric mechanisms for modern elevators. The Director of the enterprise Anatoly Savchuk said that for this we have to constantly be aware of the fact that not only there is demand, but which may appear in the near future. “We have a strong design office. Just a month we can develop new products, but unfortunately, the government is not helping us to sell these goods. Customers looking for themselves,” he says.

WORKERS. “I’ll tell you everything, but you only write that I, Lyudmila Yakimenko, looking for a husband,” — grinning widely, tells us the picker circuit breakers for household electricity meters, almost without looking up from his work. Her actions brought to automatism. Without seeing the parts, Lyudmila Petrovna feels for them on the table, deftly takes the cone, puts on his metal cap, then three more, connects them together and instantly tightens on the machine bolt, connecting all elements. “I work here 49 years. In an hour comes to collect about 200 switches, sometimes 250, especially at the beginning of the shift. Work here is not only work, but also team, communication”, — she said, deftly gathered another automatic switch.

While Lyudmila Petrovna complained that it often happens that the fingers are a little sore. “More comfortable to work, try to rewind your fingers with a bandage, says picker, but it’s the little things”. But some colleagues of Ludmila is not as resilient — they say that the reasons for discontent enough. They topical: sometimes you have to work on Saturdays, and to maintain production volumes even take work home and to ask for help of their relatives, eating together at the house to collect certain items.

TESTED ON ITSELF. The work of the blind people on the Assembly or processing of small parts can be compared with the situation when in the dark trying to shove the thread in the eyelet of a thin needle. To learn how to earn their bread by the blind, the correspondent “Today” tried to blindly work for the machine on which the letter P bending a narrow metal plates, at first glance, it is absolutely a simple task.

Going to the machine (it is a circle with a slot in the middle and two handles on the sides), I closed my eyes. Remembering where exactly on the right are blanks, I feel one of them. Not a bad start. But then things went wrong — could not manage to put detail into the slot on the circle. Searching for the slots took more than a minute, I even began to doubt that it generally is. Had to cheat and open my eyes. So I was looking for it does not at the same place. Looking around and noting the location, try a second time. Did it! Detail of bent and had to go through the pipeline next, but in the darkness I accidentally brushed it off the table onto the floor and caused a crash. Yeah, hard work. A moment later, this workstation sat tight blind man and for the same length of time bent five plates — future ground connections for electrical equipment. As we told the workers of the company, all of them, despite problems with vision, station wagons. Today may bend the plates, and tomorrow — to assemble complex electrical devices: all comes with experience, and actions brought to automatism. 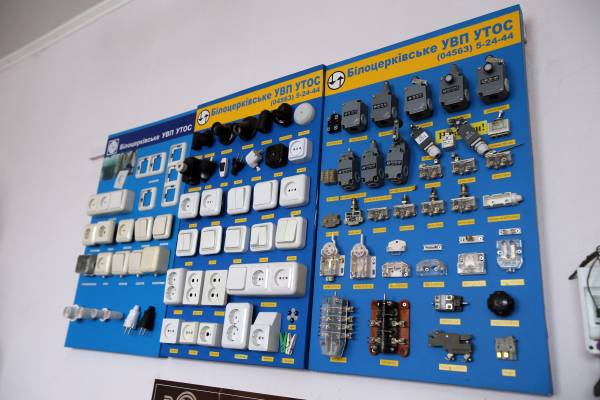 Products made in the company, successfully sold abroad

To make life easier for the blind developed dozens of special devices. One of the simplest developments is the talking watches. As shown, many blind and visually impaired people can successfully use mobile phones after the device is pumped into a special program that will read aloud click of numbers. The majority of blind people trying to avoid the help of others in situations where they can help themselves. For example, in the repair of clothing. For such needs created a special needle in which the thread does not need to pass into the ear, and to have a special opening at the top of the needle.

GLASSES VIBRATE. Industry for the blind develops and new products, which are quite expensive. For example, ultrasonic glasses. Vibrating, they are able to tell the man about how close he came to an obstacle. “The objects on the route detected using special ultrasonic sensors and is transmitted using vibrations. The closer the obstacle, the higher the oscillation frequency,” reads the statement. Is this machine a little over 2800 UAH. Besides them, the blind people, the developers offer ultrasonic lamps. It is recommended to wear on neck. The principle of operation is the following: the device emits vibrating alerts, if the user approaches the object, which is located at the level of his chest or head. These may be, for example, barriers. In Ukraine, these lights sell for 3500-3700 UAH. 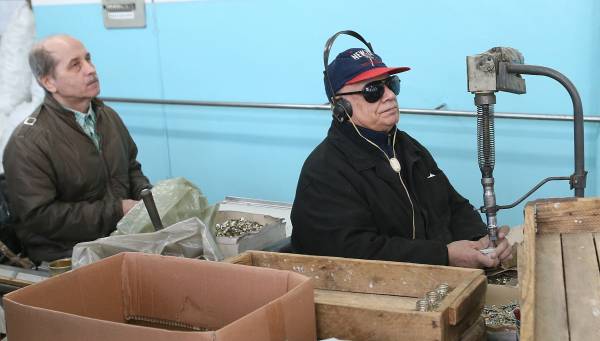 WATCH SAY. One of the most popular products from the blind people are special players and recorders. What in usual life sighted people write on the paper, the blind ranting, and then listen. For example, you need phone numbers, list of drugs. One of the latest developments is a special player which has a voice recorder and player audiobooks, and the built-in talking clock. In special shops for such apparatus is about 17 thousand UAH. 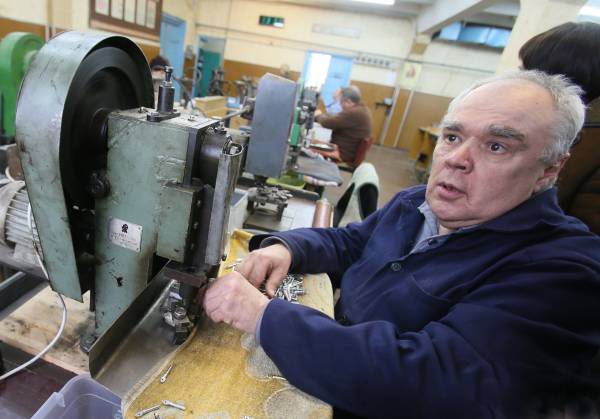 Despite the fact that the majority of blind or visually impaired people for many years do not see others, and only remember what they saw in childhood or adolescence, many of them do not lose faith in life. Moreover, try to support those who have lost eyesight recently and began to despair. “When it comes to us the kind of person I was talking to him and say: life is not over! You can not only work, but also to do some household chores. Don’t be surprised, but in the summer season can even canning vegetables and fruits, — cheerfully said the Deputy Director of the enterprise of bila Tserkva Love Krasnoshtan parallel dialing number on landline. — How exactly do procurement? Of salt and sugar needed when blockage, there are special dispensers for the blind, so the problem is solved. But when you spill any liquid inside needed quiet. I can hear how full or empty capacity. I must admit, of course, that without help can not do, but a lot of processes to manage itself”.

Another man, who draws attention to their skills in the workplace — Vladimir. He works for the company for nearly 45 years, now handles on a special machine pins for electroweak. The task of the Vladimir — not simple: to get a pin into the small hole of the machine to make a notch. She, in turn, plays the role of locking — does not slide the pin into the plug hole when you turn it on in the socket. “In an hour it turns out to process about a thousand pins per day — about 6 thousand. Part of the vision I still have, but at work I do not strain it specifically to maintain at least this percentage”, — confessed Vladimir. He adds that it is irritating when the Bank changes the design of banknotes.

“We normally distinguish money by touch. The large denomination bills larger than tens or twenties. But when changing the color of banknotes, we have to re-learn and get used to. To distinguish the denomination of the bill, I present it to the eyes. If the blue color dominates, then here are 5 of the hryvnia, if green is 20. And there are bills. Bank cards do not use, because if you type three times wrong pin code, the card is locked. Get money on your hands, make the postman”.

Among those who earn their living blindly, there is a refugee from the Donbas.
41-year-old teacher Natalia Shemelina came to the White Church Slavic. “After you have entered the city formation “DNR”, I didn’t want my son is a sixth grader growing up in such an environment. In the White Church we left for here I had work to do. At first it was to collect the lampholders and cry — missed homeland. But here I was well received, it turned out to rent an apartment. And live,” says Natasha.
Many of those with whom we talked on this company, told us that vision is lost spontaneously or as a result of diseases such as diabetes. However, UTOS (Ukrainian society of the blind) added that the forecasts for the near future are disappointing. “There is a war, people with visual impairments may become more and more” — say in the UTOS. 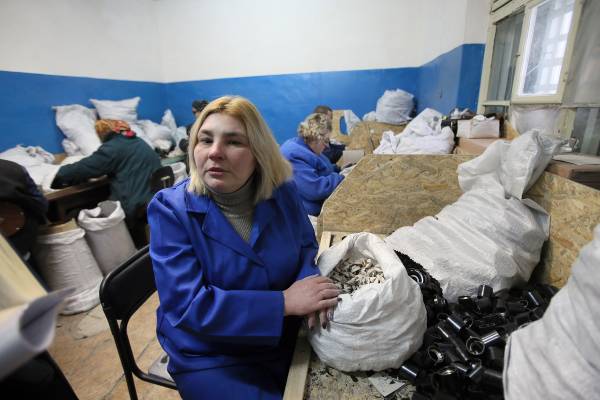 Natalia Shemelina. Before the war he taught at the school, and now collects lampholders

Now in Ukraine there are about 70 thousand visually impaired and blind.
In organizations that help the Ukrainian blind people to adapt to society, we are told that among the key problems is not only poor software specialized associations.

“Here is an example of how blind people are treated in the same Germany. There is developed special armbands. If the person with this armband comes in a supermarket, it immediately runs up several of the store employees and ask whatever goods he wanted to buy, help to choose, accompany you to the Mall. And as we often? Went the blind man to the store, something is trying to ask, and answer him roughly, they say that the labels are all written, he read, — indignantly told to us in the UTOS. — Moreover, it happens that some sellers cheat with the change. So many of those with poor eyesight, always arranges bills in certain pockets, for example, the 50-hryvnia bills in the right pocket, and the 20-hryvnia — to the left. Also visit visually impaired not primarily supermarkets and small grocery shops where the sellers already know these people, and the blind, in turn, trusted by the traders and give the opportunity to count the money from the packs.” 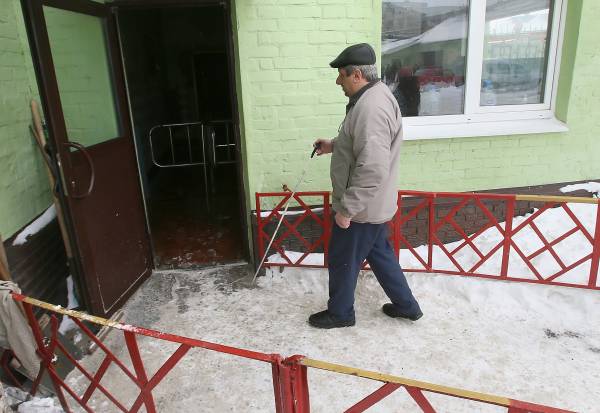 Difficulties. Ukrainian blind the most difficult.