Facebook has a great feature: it reminds you of what you were doing on the same day, two or three years ago. A personal photo album, pleasant memories of the past. But when you live in a country that for the third year is in a state of war with the aggressor, that the memories of two or three years ago is not so idyllic. These days in late January, the Ukrainian Facebook is full of potowotominimak about the winter of 2014, the Maidan. It’s like watching a family album and you see on the pages of the charred buses and cars on the streets and the first of the victims. Every day more and more, but memories of the farther, the worse. All this was in a previous life. More precisely, it was when life was different, very different. Three years ago. Not so long ago. In a past life.

Three years ago, Ukraine was a protracted revolution, the formal purpose of which was European integration. And although even then the majority of people who took to the streets and protesting against the government of President Yakunovich, understood (though not always said aloud) that the European integration is only a pretext, an external stimulus, and that in fact it is not about pressing needs in Europe, and the desperate need for a new Ukraine. Society needed a reboot. The government became the object of sharp criticism from the right wing, left wing (of course, I’m talking about real leftists, not “communism”, financed by the government) and liberals. The government was the common enemy, which made possible the trade-offs between “Democrats” and “conservatives”, between the nationalists and the liberals. In this case, Europe has become a kind of counterbalance to all that embody post-colonial, post-Soviet, Pro-Putin politician. Europe has become a counterweight to the Soviet, Europe has become a counterweight to the rehabilitation of Stalinism, Europe has become a counterweight to Russian chauvinism. I have a suspicion that Europe itself did not even know how important the role she plays in the minds of Ukrainians from the point of view of values, how the Ukrainians unreasonably idealized her, and how desperate her hope. Europe hoped to Europe cried. I must say that Europe expressed full support, though, I suspect, especially did not understand what was happening in the center of Kiev.

Then the revolution won, and did the Russian aggression. The circumstances have definitely changed. It is noteworthy that the attitude to Europe is also constantly changing. It turned out that the degree of hope for Europe not to the degree of readiness of the European community to support Ukrainians in their fight for their own freedom. In fact, it turned out that the very concepts of freedom and independence can be interpreted quite generally, not based on their understanding of freedom as such, but on the basis of shared geopolitical and historical stereotypes and cliches. I remember very well a debate on the topic of the Crimea, in which I participated just in the day when in March 2014 Russia occupied the Peninsula held a referendum organized by the Russian. The debate was in Berlin, and I took part in them, together with the German experts and specialists who spoke about the Crimeans on behalf of the Crimean people.

It was said that Russia is entitled to Crimea, that Russia could and should understand that there is nothing special or terrible at this unexpected change of state borders. It was in the middle of March, and nobody wanted to think about the war. The views of the public were divided. Someone was sure to hold a referendum in the occupied territories is wrong from an ethical and moral point of view, and someone responded that sometimes the historical pattern and the right of the strong carry more weight than any legal rules. In General, democracy. Each remained unconvinced, and Russia announced the annexation of Crimea. Then I had the impression that my opponents are arguing about a history textbook, which has nothing to do with true events in my country. The cold war, the “hand of America”, the threat of nationalism — the citizens of a free Europe, there were dozens of excuses that one country, by the way, not their own, but simply the country of which they are sympathetic, suddenly decided to take part of another country that they, on the contrary, too cute. It seemed that a conversation about some story in another garden. So I thought then. I admit that they did about me did not think anything good.

“The loss of Europe”, the Ukrainian society became more apparent with the escalation of the military conflict in the Donbass. When the territory of Ukraine there are Russian saboteurs and soldiers, and European leaders reacted with “deep concern”, it caused at least surprise and misunderstanding. When soldiers of the Russian army’s mass killing of Ukrainian soldiers near Ilovaysk, and the most serious consequence was the introduction of anti-Russian sanctions, this has caused resentment and disappointment. When attempts by European politicians to intervene diplomatically bogged down in the swamps of the Minsk agreements that do not suit any of the parties to the conflict, it seems, even the latest “Euro-optimists” had no arguments. Strictly speaking, Ukraine does not need arguments. She needs a victory and the restoration of peaceful life.

So what’s left from the European integration? Ukraine is still moving to Europe, wants the latest or not (she doesn’t seem very thrilled at the prospect). The reason is simple: Ukraine has no choice. It is either capitulate and dissolve in Putin’s Imperial project, or to maintain independence and freedom (for the last three years these concepts for many Ukrainians assumed a totally new, but not bookish or theoretical sense) to let the imperfect and not too promising, contradictory and full of double standards the European Union. Of course, over the past three years the attitude of Ukrainian society to Europe, that would be under this notion we mean to have changed. Substantially it was promoted by Europe itself. If impartially to look at the relations between Ukraine and the EU will inevitably give the impression that Ukraine has to defend itself on two fronts. The referendum in the Netherlands, a sharp deterioration of relations with Poland, the constant attempts of some European politicians to take sanctions against Russia, and, finally, we are witnessing the rejection of a visa-free regime. All of this is very remotely resembles a partnership and is not very conducive to the emergence of some illusions. Ukraine has long been no illusions. And it is also an important change in the Outlook, what is happening to us: we understand that in such a situation, in conditions of war, occupation and the change of the geopolitical situation, we can only rely on ourselves, and we understand and are able to continually make sure that to many citizens of the European Union, concepts such as “democracy” and “dignity” has become an abstraction, something from the past, something that you can place on library shelves, not in real life.

What, in fact, today is the relations between Ukraine and the European Union? Loans, regulations, promises. Open smiles of politicians, and securely closed the state border. The concerns of leaders and endless speculation in the press on the topic of Ukrainian nationalism and radicalism, which supposedly are the main trends in the Ukrainian society. In fact, it means absence of equal dialogue, a lack of understanding. This is a political game instead of principled diplomacy is sincerity. If we add to that the corruption and helplessness of the Ukrainian politicians who represent Ukraine at the official level, the overall situation looks very grim. Could this alienate Ukraine from Europe? I am convinced that there is. I repeat: we have a small selection. The unpleasant feeling of restraint and excessive pragmatism on the part of those on whom you rely. But politics, unlike solidarity, pragmatic people do, and therefore not always sincere.

In the end, I would like to add that my position, of course, don’t even pretend to impartiality and lack of emotion. My country for the third year waging war with the occupier. And this war, I certainly do not believe civil. I support the army of their country, because it provides me freedom and independence. And I think traitors and collaborators of those who took up arms to fight against their country and supported the aggressor who invaded the Ukrainian city. No, I do not think that an occupier can engage in dialogue, especially when he’s carrying a loaded weapon. I suspect that, most likely, my position is no surprise — even those EU citizens who do not recognize my country’s right to justice, and, of course, those who understand why the last three years my country is at war. It seems that everything is already decided what to believe and what to close my eyes. Just those of us who are honest, do not call themselves “experts”. 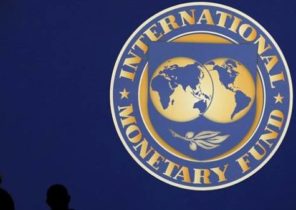 The IMF has not put forward additional requirements to Ukraine.