In the ongoing American and British authorities in the investigation of money laundering came from Russia money Deutsche Bank ordered to pay a fine of almost $ 630 million.

About the decision announced on 30 January the financial regulator of new York state. It was the result started in the summer of 2015 of the investigation into attempted bribery of a trader Deutsche Bank in Moscow, the Russian clients who tried to conceal the origin of their funds.

They wanted the trader has carried out operations with one of their accounts which were frozen at Deutsche Bank in the internal investigation of the activities of brokerage division of the Moscow office.

Whatever it was, the misadventures of a German Bank this is not over, because the us Treasury and the Federal reserve system continue its own investigation, as reported on Monday, AFP informed source.

Overall, announced on Monday the decision involves the payment of $ 425 million to the new York regulator and 204,46 million dollars — British.

Working together, investigators from both departments have paid special attention to the “mirror” transaction, as reported by the AFP in July 2015, informed sources. In new York said on Monday that the Russian clients to use the brokerage mechanism for illegal withdrawal from Russia of $ 10 billion with Deutsche Bank.

More specifically, clients ruble invested in assets of the Bank in Moscow. In parallel, London representative office Deutsche Bank has pursued the same investment in international currencies at the expense of those same clients that were submitted are registered in offshore companies. This practice was the basis for “legal” capital flight from Russia.

“Deutsche Bank and several senior members of his management missed a number of important points for the detection, interception and investigation of tweaks ( … ), with the assistance of the Moscow representative office that also involved offices in new York and London,” says the American regulator, citing valid in the United States Bank secrecy act.

The law and the us Treasury Department against financial crime require that all users of the U.S. financial system institutions report any suspicious transactions that may require blocking.

“In the current interconnected world of Finance, global financial institutions need to be vigilant in the war against money laundering and other activities that can contribute to cybercrime and international terrorism,” — said the head of the new York regulator, Vullo Maria (Maria Vullo).

The investigation was conducted as part of a larger investigation about the laundering of billions of dollars from Russia, who passed through London with the help of complex financial instruments.

In addition to the fine, Deutsche Bank agreed to hire an independent inspector to ensure that the new procedures of internal audits will meet the requirements of regulators.

The German Bank has already taken steps in this direction: at the end of 2015, he reduced Russia-related risks, ceasing the investment activity in the country. Whatever it was, he retained the consulting activity in the brokerage sector, including for foreign exchange transactions.

Announced on Monday the decision shows that Deutsche Bank decided to end with a mountain of litigation and focus on lifting their own activities after the involvement of the exchange’s funds.

Alone Putin: Russia is moving away from the countries of the former USSR 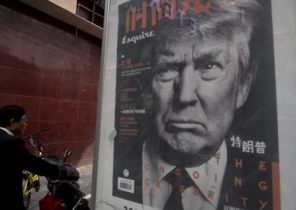