In Ukraine, according to the decision of the national Commission that performs regulation in the spheres of energy and komuslug (NKREKU), in 2017, more expensive electricity. By higher light will grow and the cost of water, which can lead to the fact that the Commission would also have to raise the tariff on cold water. In addition, as experts explain, in the next year for Ukraine will rise in price of imported gas, the cost of which depends on the tariff for natural gas for the population. In turn, the price of gas determines the tariffs for heating and hot water. The website “Segodnia” figured out how to change the prices for communal population.

Why can rise the gas In may last year, when the Cabinet decided to revise the tariff of gas one thousand cubic meters of imported natural gas worth $ 185, and this figure used in the formula when calculating tariff for the population. According to the draft budget for 2017, thousands of cubic meters of imported gas will cost $ 245. In addition, the rose and the dollar – buy gas in dollars but sell in UAH.

As stated in the Memorandum with the IMF by April 2017 Ukraine is obliged to start the mechanism, allowing to adjust the gas tariffs for the population and hold quarterly performance. As a result, the fuel for the Ukrainians can rise at the end of this heating season.

The price of gas its ruling sets the Cabinet, but the cost of other communal services (except tariffs for maintenance of houses and house adjoining territories) defines NKREKU. Service providers across the country are counting the cost of its product (water, heating) and submit the documents to the National Commission. Where they are studied to decide about how and in what direction to revise the tariff. In this case, each enterprise, the cost different is to heat water can be as expensive gas with cheaper nuclear energy.

If natural gas more expensive, NKREKU will be forced to revise the tariffs for hot water and heating. Most businesses use for heating water and generating heat the gas, which is more than 60% in the cost structure of production. Proportional gas will rise in price and other commonly. Electricity will rise by almost 30%

In 2015 the national Commission decree №220 approved a gradual increase in the cost of electricity. The last stage falls on March of 2017. In the beginning of the year, Ukrainians will pay for each kWh when the consumption is less than 100 kW 71.4 penny, and from the first of March – 90 cents. If consumption more than 100 kWh each kWh until March, worth 129 cents, and after Mar – 168 cents.

However, this rise in prices will not stop – in the structure of the tariff for cold water for almost 30% is the cost of light. After a rise in price of electricity the national Commission will also have to revise the tariff on water supply. 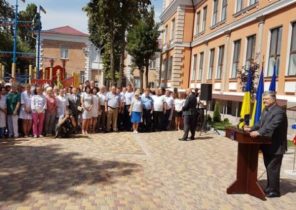