Latvian-Russian relations in the past year continued to be bad. “Unfortunately, because of the historical oppression of phobias and following the wishes of their senior partners in Latvia, in our opinion, prevail biased opinion on the Ukrainian events and biased attitude to Russian”, — said the acting Russian Ambassador to Latvia Alexander Veshnyakov. It is typical for Russia — it always sees to blame for the misery somewhere outside, but not see their own guilt. What Latvia should do? Delighted to accept Russia’s aggression in Ukraine and occupation of Crimea?

Veshnyakov will soon be replaced by a new Ambassador — the current Deputy Secretary of the security Council of Russia Evgeny Lukyanov. It will not change anything because the new Ambassador will be the same.

Between the two countries ‘ diametrically opposed views and opinions on how the events of history and the actual processes on the geopolitical field. There’s nothing to do, because it was and will be. But at the same time, Russia was and will remain a neighbor of Latvia with a huge market and natural resources. Russia can and should be traded as possible in the present period restrictions due to sanctions and embargoes. In this regard, the contacts of the Minister of agriculture Janis Duklavs, Minister of Finance Given Reizniece-Ozola and the Minister of transport Uldis Augulis meets with Deputy Prime Minister of Russia Arkady Dvorkovich was quite clear. There are many important for Latvia practical issues for discussion and approval. Despite the fact that the relationship is cool like in the fridge, Latvia continues cross-border cooperation in the fight against crime, on the issues of border demarcation and illegal immigration.

Looked pretty ugly in that one meeting, at which the Latvian Ministers spoke with a senior official of Russia in Latvia was used for political propaganda scandal. The foreign Ministry tried to ignite, presenting everything as if Ministers have met secretly with Dvorkovich, though the foreign Minister was well informed about the meeting and about what his colleagues were going to discuss and has discussed with the representative of Russia. No separate foreign policy Ministers from the Union of greens and farmers is not implemented. It is also clear that any bargaining outside the framework of reciprocal sanctions the EU and Russia is impossible.

If Latvians do not speak Russian, it will be done by the Portuguese and the Germans. And when the deterioration in relations between the EU and Russia will weaken, they will pass by Latvia, which will remain as poor to watch on the sidelines.

It is difficult even to talk about some of his foreign policy of Latvia. The current Minister of foreign Affairs is able or not to do anything, or to do something that only worsens our relations with the neighboring country. After Edgars rinkēvičs was denied entry into Latvia the three Russian singers, he destroyed the festival “New wave” in Jurmala and become “shake hands,” or this person didn’t say Hello. For a diplomat this is not good. The diplomat should act wisely and cleverly — so that there is a mesogenic bridges.

Rinkēvičs recently described the Latvian-Russian relations as those in which from the Russian side there is no threat of a direct military attack, but there are risks of so-called hybrid war. Such a war was impossible in the days when there were no computers and the Internet. The Russians very successfully used these miracles of new technologies to spy, hack and deface the websites of Western governments. The Internet is also used for propaganda. Latvia allocated to the label “failed state” that does not quite work. We do criticize their government, many leave the country, but this does not mean that the inhabitants of Latvia are ready to jump into the arms of Russia or are fans of the collapse of the USSR.

Hybrid war also includes “atamatov” or “polite green men”, who two years ago occupied the Ukrainian Crimea. To what extent such a danger for Latvia is really there, because in our country there is no shortage of politicians who are willing to say or do something provocative like on Patriotic motives. And then the Russian “itemname” can come to the defense of their compatriots. It is quite dangerous. The only way in which Latvia can eliminate this danger, — integrating, and friendly policy towards the Russian-speaking minority. Should listen to the thoughts of the President Raimonds Vejonis about the fact that children of non-citizens need to grant citizenship of the Republic of Latvia from the moment of birth. However, a lot of people and politicians who do not want or understand.

Latvia — at least now — is of little interest to the Russian leadership. The only time Russian President Vladimir Putin at his annual big news conference in December mentioned the Baltic States, is the issue of the Kaliningrad region. Putin is in some way expressed regret that the Baltic States are now headed for energy independence from Russia. Supposedly everything was so perfect — the Baltic fleet was well. But nothing can be done — the Baltic States would be unwise to put all eggs in one basket and continue to maintain absolute energy dependence on Russia. If Putin is sad about this, let them sad.

The Baltic States will be difficult with Russia in the future. We are in the eyes of their ideology, “transit state-parasites,” who live at the expense of the Russian ships carrying resources. Therefore, the Russians are developing their ports. Here, too, nothing can be done: such is the policy of Russia. But if the capacity of Russian ports is insufficient, it will have to establish relations and to conclude transactions with the ports of Latvia. Economics is sometimes above ideology. If the ideology begins to cost too much — it is unprofitable. Russia today is Putin’s Russia, but nothing lasts forever, including Putin. Anyway Latvia will have to build relations with the neighboring country. The better they are, the better for us. 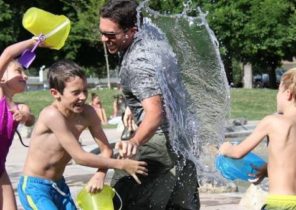