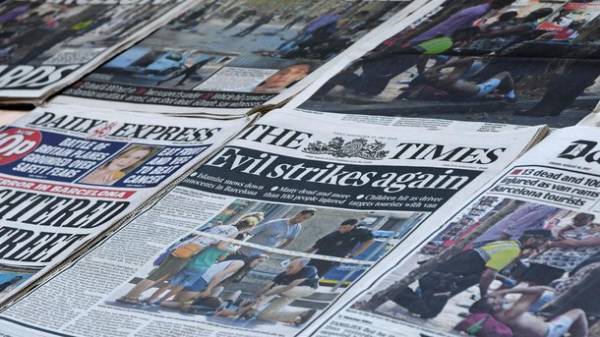 Two Ukrainian servicemen wounded in the ATO area in the Donbas over the past day,the dead no, said the speaker of the Ministry of defence on ATO Col.

20 thousand primary school teachers held remote and full-time training for implementing new learning principles, it was stated by the Minister of education and science, Liliya Hrynevych.

2 836 the families of servicemen and persons discharged from military service in the reserve or retired in 2015-2016 will provide housing for the Ministry of defence, including 635 families received monetary compensation in return adequate housing.

176,3 million UAH were compensated by the government from April 1 – since the inception of the program “Affordable medicine” – pharmacy establishments, accounting for 25% of the total amount allocated for the program this year (700 million UAH).

320 illegal migrants was detained from the beginning of 2017. During the years of independence at the Ukrainian border detained 120 thousand illegal migrants, reported the State border service.

798 people first, 2017 died on the reservoirs of the country, including 81 children, said gschs. When rescued 509 people, including 112 children. In August already drowned 202 people – that is almost two times more than a year ago.

231 soldier from 10 foreign countries will take part in a military parade to mark independence Day, said freelance adviser to the President of Ukraine Yuri Biryukov.

9.9 billion UAH was directed by the State Agency of highways (“Ukravtodor”) as of date on the road work, said the acting head of “Ukravtodor” Slawomir Nowak. According to him, the day repair 600 cmdarg.

1 million Euro grant aid allocated to Germany for support to Ukrainians affected by the war in the Donbass.

30 thousand tons of honey Ukrainian beekeepers exported for the first half, the main buyers are the regions with the highest purchasing power of consumers – Europe and the United States. Over the last 10 years the export of honey increased seven times. In 2016, according to the Ministry of agrarian policy, were exported 57 thousand tons of honey.

UAH 1.3 bn spent last year, the national Bank for printing banknotes and making coins, said the Deputy Director of Department of strategy and reforming of the NBU Ruslan Kravets. The amount of cash in circulation in Ukraine, as of July 1, 2017 was $ 331 billion. While 328,9 billion – banknote (2.8 billion pieces), and coins of 2.04 billion (12.9 billion pieces).

55,72 million subscribers of mobile communication was on July 1 in Ukraine, 1 April they were 56,31 million But you have to understand that in this case we are talking not about people but about the number of active SIM-cards, one person can several.

14 people were killed and about 100 injured in terrorist attacks in Barcelona and Cambrils. Citizens of 24 countries were killed or injured.

Increased by 0.6% of GDP in the Eurozone and the EU in the second quarter, according to Eurostat. Compared to the same period last year, GDP grew 2%. The Czech Republic, where GDP increased by 2.3%. Next come Sweden, Romania, Netherlands and Latvia, whose economies grew by more than 1%. In annual terms, the best performance Romania.

Grew by 8.7% in the second quarter in annual terms, the total income of the Turkish tourism industry. In 2016, the flow of tourists to Turkey was the lowest since 1999.The income from this industry amounts to 12% of GDP. According to the International organization of tourism, Turkey is now the 10th place among the most visited in the world.