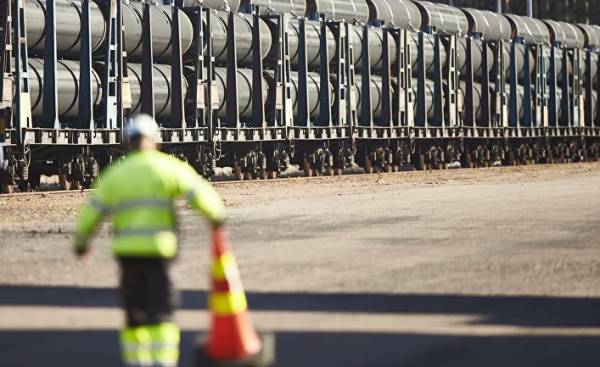 The struggle against the “axis of evil” in Washington back in fashion. This concept was formulated 15 years ago by the Bush administration to denounce the authoritarian political regimes in Iraq, Iran and North Korea as a danger to the entire world and has now expanded Russia. The U.S. Congress has developed a list of new sanctions against those countries — with the exception of Iraq, which some years ago was occupied by American troops and the White house must now approve them. The main attention is paid to Russia, with which President of the United States Donald trump flirtation during the election campaign.

Trump not only praised the Kremlin leader, Vladimir Putin, but promised to quickly improve relations with Moscow after his victory in the elections. Similarly, the hopes of the Kremlin to end the crisis in mutual relations since the conflict in Ukraine are associated with the name trump. And on the Capitol meanwhile, openly talking about the fact that the Russian leadership is not limited to the passive waiting, but actively interfered in the election campaign. Now, these sanctions have become for it by a fine.

And they should address both Putin and trump sort of “axis of evil”. One for the war in Ukraine, the annexation of the Crimea and exerting influence on the election campaign, the other for the case with the Kremlin, but perhaps also for the whole of his political habitus. Too close were the contacts too opaque various meetings between the team of trump and Russian envoys to the political elite still have confidence in the President of the United States. Therefore, the new law gives the Senate the ability to block the lifting of sanctions. A clear affront against trump, who then (of course, on Twitter) complained that his friends in the party “are doing too little to protect their President”.

These sanctions are part of a political struggle for power in which the tramp must now invest more than he can provide. It looks so that he is unlikely to have any other opportunity but to act “for a hard line against Russia”, as stated by his press Secretary. A veto would be just again rejected by Parliament. In addition, the result of the veto would strengthen the impression that the US President is under Russian influence.

Of course, there is a real danger that opponents of trump will not get to your target: of course, these sanctions significantly affect Russia in the energy sphere. The oil and gas sector is a key source of foreign exchange earnings. Moreover the actions of the US lawmakers once again remind investors about the risks associated with business in Russia. Not surprisingly, the Kremlin views these new sanctions as “counterproductive” and “harmful” for both countries. Its policy of Moscow from-for it will not change. However, these sanctions will also affect partners of the United States, primarily in Europe.

“The nervous reaction of Brussels on new sanctions the US is clear: these sanctions are directed not only against Russia but also against the EU, which the US wants to impose its shale gas” — brazenly writes in Twitter Alexei Pushkov, a foreign policy expert at the Russian Council of the Federation. Pushkov is known for its controversy, but in essence, he outlined the problem: these sanctions are massively interfering in the internal European supply of energy, barring a major investment in pipeline projects or the extraction of natural resources with the participation of Russia. Specifically, it concerns the extension of the Baltic pipeline and, no matter how he looked, the gas pipeline project in southern Europe (whether southern or Turkish). Consensus about the construction of these pipelines in Europe, but the Europeans should take on this issue. Installation from Washington is misplaced.

Growing dissatisfaction with this unfair way to enforce their own demands at the expense of others. And thus can be resurrected “axis dissatisfied” of “old Europe”, which is so called 15 years ago in Washington for its unwillingness to take part in all its scams. Sanctions against Russia find opponents in Europe, especially in the South of the continent, in countries such as Greece, Italy, Austria and Cyprus. Skeptical about this and the German economy, which over the past 25 years has established close relations with Russia.

Still, the political consensus is that we can not tolerate the violation of international law, have overshadowed economic considerations. However, the Europeans do not want to use them as leverage in political battles for power. The European Commission has called on Washington to coordinate these activities. If this does not happen, then there is a risk of a serious transatlantic dispute about the continuation of the policy of sanctions, which may even lead to the collapse of the transatlantic coalition.