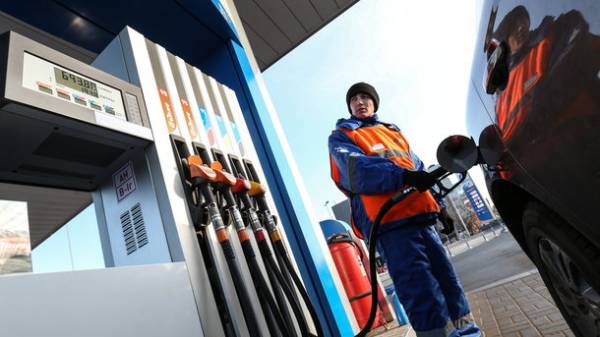 Now to fill the car with a tank of 48 liters of gasoline “A-95” is cheaper by 24 hryvnia than a month ago. To fill “A-92” – cheaper by 60 hryvnia, diesel fuel – 30 hryvnia. However, the cost of fuel this month or stabiliziruemost or gradually go up, experts predict. How to change the price of gasoline recognize the site Today.

Why fuel prices in June fell

The price of petrol depends on the cost of petroleum products on European markets and the dollar. The Ukrainian company to pay for imported petroleum products and pay taxes in foreign currency. Therefore, the price tags at the pump directly depend on the hryvnia. Throughout the month the national currency only strengthened, while the price of oil was relatively stable. In addition, the sales volume has not significantly changed. These are the main reasons for the reduction in price of gasoline at the pump, says the co-chair of the energy strategies Foundation Dmytro Marunych.

However, according to the Deputy Director of the scientific-technical center “Psyche” Gennady Ryabtseva, gas stations have cut prices to stimulate demand.

“Due to the fact that the oil on the border, has become cheaper – reduced prices in the wholesale sales. This was reflected in prices at the pump. To stimulate demand, the company went not only to the increase of discounts for regular customers, but also to reduce the cost price on the stele”, – said the expert.

What will be the price of gasoline in July-August

The appreciation of the dollar on one hryvnia will provoke a rise in prices for gasoline and diesel fuel by 60-70 cents per liter, said Gennady Ryabtsev. If the oil price will rise by 1%, the price of gasoline will increase by 10 cents per liter. However, while the situation is stable reasons to increase fuel prices there, experts believe. However, there are factors to further reduce the cost of gasoline. According to Dmitry Marunich, the potential to reduce the cost of petroleum products in Ukraine have been exhausted. A rise in price of oil on the world market since the beginning of the week did not significantly affect the market.

“The rising oil price is fluctuation within a few percent. This can lead to some changes. But the operators of the market lay in the price risks. This is already incorporated in prices at the gas station. But, if the price of oil change at 10-15%, while fuel prices will be adjusted. But the hryvnia is unlikely to remain at current levels until the end of the year and this can lead to a rise in price of fuel,” – said the expert.

Now petrol prices have reached the level that matches the market, puts Gennady Ryabtsev. Lower prices in the future is possible only in large networks that may increase discounts to loyal customers.

The expert nefterynka Leonid Kosianchuk notes, as the pressure on the market is not – he works in the competitive environment, and nobody wants to raise fuel prices.