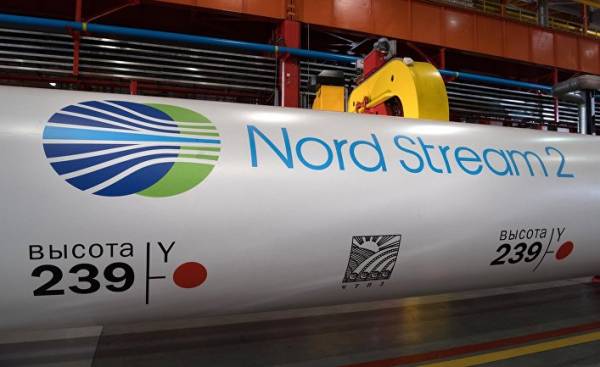 For several months Washington is fixated on the issue of Russian interference in the American presidential election, and the same concern is present with respect to the election of such of our European allies as France and Germany. Moscow’s actions pose a direct threat to the credibility of our presidential elections, and therefore easy to understand that the legislators and experts pay much time in their discussion.

However, the Russian campaign, aimed at undermining the United States, goes far beyond the ballot boxes and covers many areas — from the annexation of Crimea in Ukraine to support the Syrian dictator Bashar al-Assad. One component of this policy that attracts surprisingly little attention, is the energy policy of Russia.

As the second largest natural gas producer, Russia, in fact, has the leverage on its European consumers, threatening them with termination of gas supplies, and, in addition, it uses its influence to sow discord among the European countries. The new pipeline, which Moscow intends to build, is able to significantly increase its impact, while potentially its share in the gas market of Germany can exceed 50%. This policy (in particular, pipelines) poses a direct challenge to U.S. interests in terms of stability that emerged in Europe after the Second world war, and it has the potential to have an impact will last longer than the election-related scandals. At the end of April of this year Russian gas giant Gazprom signed a deal to Finance the construction of the pipeline “Nord stream-2”, in which natural gas from the Russian port of Ust-Luga, located to the West of St. Petersburg, will be transported via the Baltic sea directly to Germany, where it will be distributed and sent to other European countries. Infrastructure of natural gas transportation is expensive and difficult to build, but when it is already created, the pipeline can change the flow and thus in the decades to influence the relationship between involved in a similar project countries. If the pipeline “Nord stream-2” will be tested for compatibility and will be built, it will increase the Union’s dependency on Russian natural gas and will strengthen Russia’s influence on key allies of the United States.

One analyst suggested that after the commissioning of the pipeline “Nord stream 2”, the Russian share of the gas market in Germany will exceed 50%, while in 2015 this figure was 43%. Poland already gets more than two thirds consumed in the country of natural gas from Gazprom. In addition, supporters of the pipeline “Nord stream-2” suggests that domestic supplies of natural gas in Europe over the next 20 years will decrease by 50%, and there are concerns that Russian gas pipeline will largely meet the growing need for energy imports, thereby deepening the dependence of Europe and restricting imports from other places.

Military spending and misinformation until recently been the main topics in the evaluation of the Russian threat. After held in 2006 NATO summit in Riga, the United States put pressure on its allies, trying to get them to comply with the promises about spending, at least 2% of its GDP on defense, and this issue was a major during the first official meeting of NATO in may of this year involving trump. Misinformation has also attracted attention on Capitol hill, it is, in particular, about the sanctions against Russia contained in the bill.

However, the success of the pipeline “Nord stream-2” is a reminder that security does not depend only on military force and a healthy media environment. This pipeline is a blatant attempt by Russia to apply the European principle of “divide and conquer”. Especially adept and cunning this move is because “Gazprom” has presented an attractive economic justification of this project for European importers of natural gas.

The introduction of Russia into operation of the pipeline “Nord stream-2” to weaken Europe in three key areas. First, it will provide Russia with leverage over Germany and other European countries. Having such a significant share of Russian supplies, Germany would become a hostage of Russia and the Russian manipulation, especially if Moscow wants to raise prices, or — in extreme situations — to reduce the supply. This will allow Vladimir Putin to possess considerable influence, and the United States and Germany should not assume that Russia will never resort to extreme measures.

Second, the pipeline “Nord stream-2” will allow Russia to bypass Ukraine when supplying natural gas to the countries of the European Union. In other words, if Russia wants to cut off the supply of natural gas to Ukraine, it will not affect Germany, as it might happen today. Separating from each other the supply in the European Union and Ukraine, Russia will be able to exert more pressure on Ukraine to shut off her supply of natural gas without stopping the supply of such influential regional competitors like Germany. And finally, even more important, perhaps, is that the new pipeline will exacerbate the contradictions between the EU countries and will weaken their resolve against the sanctions imposed against Russia because of its annexation of Crimea. “Nord stream-2” will contribute to deepening relations between the EU and Russia, and the displacement of other foreign suppliers, and as a result, European countries will be in a complicated economic relations with Russia. In this case, risk is exposed to imposed against Russia sanctions — European countries with close economic ties with Russia put them under question. This includes Hungary, which is currently engaged in negotiations with Russia on supplies of natural gas after 2021. Ultimately, the pipeline will exacerbate the division between those Europeans who are concerned about the influence of Russia and its opposition to domination, and those Europeans who like cheap energy and cooperation with Russia.

Moscow has in the past showed a willingness to use its leverage as the main supplier of natural gas to provide pressure. She stopped supplying natural gas to Ukraine in 2006, in winter 2008 to 2009, and during the conflict in 2015. Traditionally Russia sets different prices to different consumers and also threatens to stop the supply, thus attempting to achieve geopolitical goals.

Taking into account the consequences of the construction of the pipeline “Nord stream-2”, it is not surprising that many European countries consider energy as an important issue in the field of security. A small country in Eastern Europe, which, as a rule, do not have a large impact on the determination of energy policy, like their larger neighbors, are particularly vulnerable to Russian pressure. The Senate hearings with representatives of Eastern European allies energy security was one of the most discussed topics, competing in this respect with the military and disinformation. Representatives of Eastern European States spoke about the importance of diversifying energy supplies. For example, the Polish Ambassador, discussing the planned integration of the energy systems in the European Union, said that without energy Union “and the European Union.”

In fact, influential European and American politicians understand these problems, and they tried — unsuccessfully — to use regulatory tools to prevent the approval of this project, whereas American diplomats urged, in particular, Denmark to oppose its approval. Opponents of the “Nord stream-2” on both sides of the Atlantic still retain the hope that the draconian application of the energy regulations of the European Union or currently under discussion the decision of Denmark in the field of national security can at the last minute to stop the construction of this pipeline. But today, when the way it is only the environmental conclusion, we can say that it is likely to be built. Therefore, the United States must find a way to balance the growing influence of Russia and start to support the process of diversification, thus weakening the dependence on Gazprom. The United States needs also to support the construction of export terminals for liquefied natural gas (LNG), to promote the formation of the global market for liquefied natural gas, which will weaken the role of long-term bilateral contracts, allowing countries such as Russia offer the best conditions. In addition, Washington should encourage the integration of energy infrastructure of the EU and facilitate the transition of Europe on clean energy.

There are some encouraging signals from the administration trump. In April the Minister of energy Rick Perry (Rick Perry) has announced the approval of plans to build an export terminal for liquefied natural gas Golden Pass, and the Director of the National economic Council (National Economic Council), Gary Kohn (Gary Cohn) calls for increased U.S. exports of LNG. Developments in the private sector, are also positive. In June, a Polish company received a shipment of LNG from Cheniere Energy companies, and thus Poland became the first country of the former Soviet bloc, received a liquefied natural gas directly from American companies.

Higher energy stability may be particularly important during the crisis — as happened after the catastrophe in Fukushima in 2011, or — very importantly — in any attempts of pressure from Moscow, which is a constant fear in Europe. The countries concerned by the energy influence of Russia, you understand the importance of the potential protection provided, in particular, due to the supply from the United States. In fact, Lithuania is even called the terminal to receive imported LNG “Nezavisimost” (Independence). Russian interference in presidential elections in America is a serious problem and requires a full investigation. However, the dangerous energy policy is a threat to United States interests in maintaining stability in Europe after the Second world war, and it deserves serious attention. Ignoring this will only be in the hands of Russia.