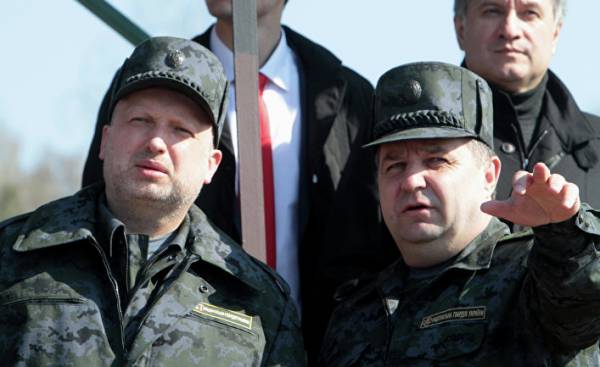 The Secretary of national security and defense of Ukraine Oleksandr Turchynov said that the time has come to move to a new format to protect the country instead of ATO in the Donbas. In his opinion, you should change the order of use of armed forces of Ukraine for better protection from hybrid threats. On the possibility of implementing the so-called format Turchynov “Apostrophe” said military expert Oleg Zhdanov.

On Turchynov bears the stamp of the policy, surrendering the Crimea. In order to justify himself, he occasionally makes a loud statement. The statement that the country need to be protected in another way, political PR, which aims to remind myself.

The President of Ukraine Petro Poroshenko clearly follow the political horizon and extinguished all the stars around them. We even ask such a question: “If re-election, then who? And certain”. Therefore, Turchynov, in order not to sink into Oblivion, as happened with Arseniy Yatsenyuk, occasionally says the right thing. And now stated that the ATO have outlived their usefulness and need to change the format. Two formats, in which you can change — give up, recognizing the special status of the territories, and to give Amnesty to militants or to transfer the ATO in the category of war with the Russian Federation. Impossible neither that, nor another — a society that will not accept. So I think that this is a purely populist statement, the purpose of which is to try to remind myself.

If to speak about the military situation as about the new format of protection, then, given the political situation, the President will not agree to this decision. Martial law provides for the complete isolation of these areas, then what about the smuggling, the formula, “Rotterdam” and everything else? In addition, the military situation cannot be entered in the status of the ATO, therefore it is necessary to admit the war is war, and then to impose martial law. But the President did not even dare to impose a state of emergency that he has the right to do, declaring the territory a zone of a humanitarian catastrophe. He did not go for it because they can interfere with international institutions and will be very much prying eyes.

See how cleverly manipulates the President of the Council. When he needs to share the responsibility, it collects the national security Council, which enters the solution, and then Poroshenko to sign it, stressing that this decision of the Council, not him, remember the ban of social networks. When the President is not necessary, he proposes the Verkhovna Rada, and she votes as he needs.