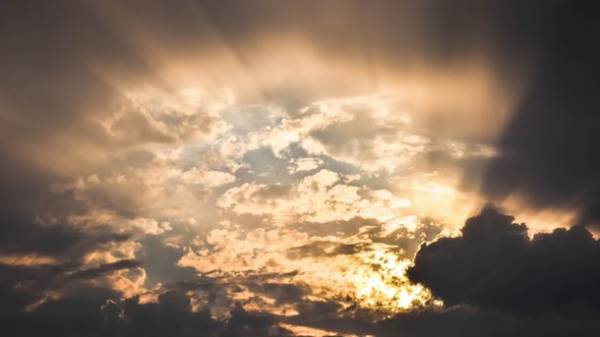 Ukrainians at the beginning of this week, expect hot weather and thunderstorms. The temperature drops from 30 to 22 degrees above zero in the second half of the week. While storm cyclone from the West will move to the center and East of the country. The website “Today” found out what weather to expect Ukrainians in the next few days.

The sixth of June, thunderstorms are expected in the Transcarpathian, Lviv, Ivano-Frankivsk and Chernivtsi regions. Also weather forecasters predict rainfall in Chernihiv, Sumy regions and Kyiv. The rest of the – mostly cloudy. Hot weather will be in the centre, the South and the North. Here the temperature rises above 30 degrees Celsius. In the North, the West and in the capital from 25 to 28 degrees. 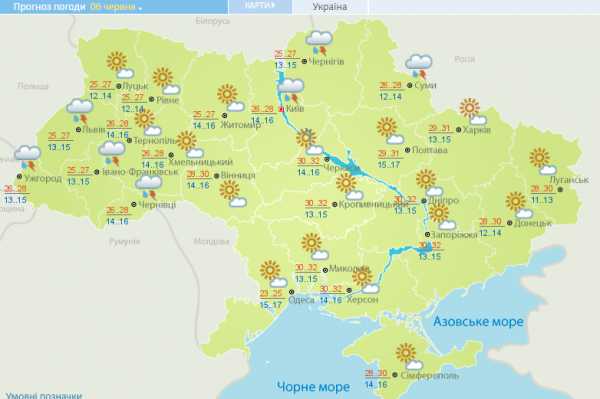 On Wednesday, the seventh of June, is expected warming up to 32 degrees in the center, North, South, North and in the capital. In the Chernigov and Sumy areas – thunderstorms. As precipitation and thunderstorms will be this afternoon and in Western Ukraine, the temperature will fluctuate between the marks in 25-27 degrees. In more parts of the country – mostly cloudy. 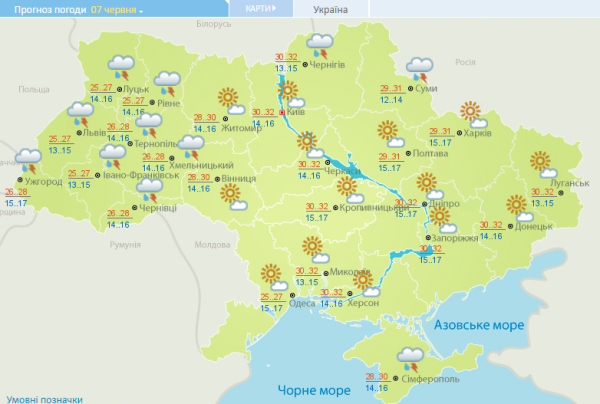 The eighth of June Ukrainians waiting for a sudden change in the weather. The storm cyclone will spread to the entire country, except for Kherson, Zaporozhye regions and the East. In the capital the thermometer column will rise only up to 22-24 degrees above zero during the day, in the West, the air will be warmed up to 19-23 degrees. In the centre and South, from 26 to 30 degrees. Relatively warm weather is expected in the East to 30 degrees.

In the capital this day will be thunderstorms and temperature will fluctuate in the range of 22-24 degrees. 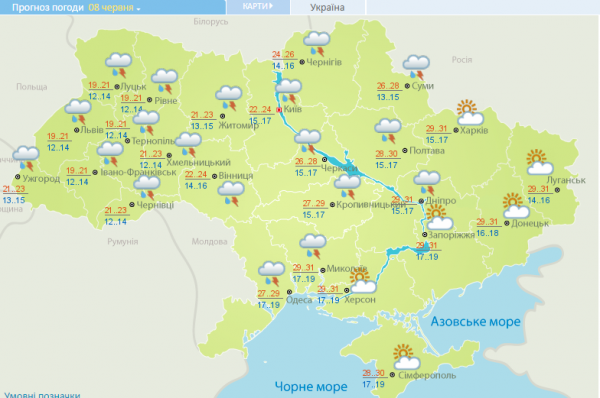 The ninth of June, the cyclone leaves the territory of the West country, the rest of the strong thunderstorms. In the Western and Northern areas the thermometer column will fluctuate in the range 21-23 degrees above zero. In the capital – from 20 to 22 degrees. In the center on the South and East of 24-28 degrees. 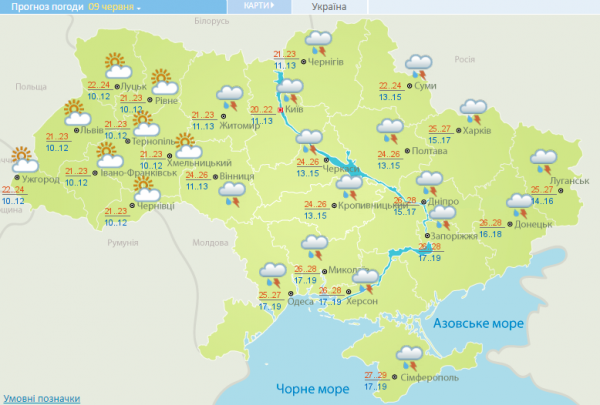 According to weather forecasters, in June, compared with may, more frequent hail and squalls. This year in the first month of summer, suggest the ukrgidromettsentra, the average temperature will vary between 16-20 degrees Celsius. Monthly precipitation – 45-32 mm.

On the sixth of June is revered the memory of the monk Simeon the Stylite on the Wondrous mountain, a miracle worker, according to the portal “Weatherman”. The weather on the sixth of June in earlier times predicted bee: if they are buzzing swarm on the blossoms of the Rowan – tomorrow will be clear day. At this time in the gardens late blooming Apple varieties, cherries.

On the seventh of June, the day of memory of Saint Ferapont and John the Baptist. In earlier times this day was called the honey dew, Ferapont a Fieldfare. The people of this day say: “Midsummer went harmful (copper) dew, bringing disease to the plants.” on the seventh of June often thunder storms. Especially our ancestors observed this day by Rowan: if it more colors – will be a good harvest of grain. But if Rowan later blooms, the autumn will be long.

Eighth of June is revered the memory of the apostles Carp and Alpheus. Our ancestors called this day, Carp-karpalov as Carp good carp caught. Watched this the day for mosquitoes: if they were too many, the last days of the month expected a warm but rainy.

Ninth Jun revered the memory of the Hieromartyr therapon, Bishop of Sardis, and the martyrs Theodora the virgin. The people have a saying: “don’t take On Fedor in public copy”. This day hut is not broke and did not wash, not to cause trouble. In earlier times this day was watching ants: if around the nest a lot of ants – to good weather.

10 June is the day of memory of venerable Nikita the Confessor. Saint Nikita the people revered guardian of the geese, so it is simply called a goose house to avoid. This ritual celebration. Geese in the spring require careful maintenance, as appeared at this time, the goslings die. To save them from destruction, the people, and gave them a patron Saint. The people believed – if a quiet day, the harvest will be good. Also watched the clover “Clover brings the leaves to the bad weather”.