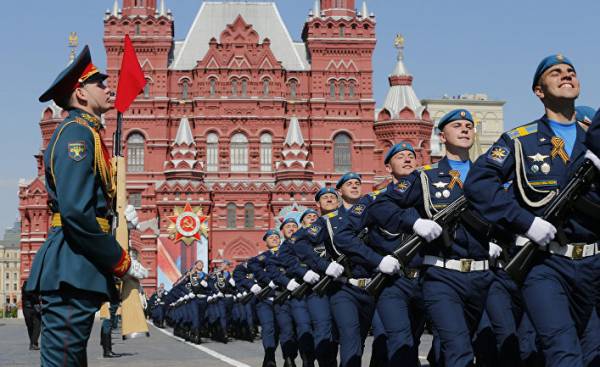 Metal, bringer of death, hurtling at high speed through the streets, rejoicing and delight of the audience. A few weeks before the annual may 9 Victory day Parade Russian army fulfills the choreography in the center of Moscow. New and old tanks, amphibious vehicles and artillery — the main characters of the Russian celebration of victory over Germany in world war II.

A group of older women pictures of tanks and waving hands in the tank. Women begin to clap their hands when passing by rattled are missile systems s-400, but stop flapping and reverently silent when street riding huge RS-24 “YARS”, the elder brother of all Russian weapons. “YARS” — the largest military weapons Russia, 40 ton 16 wheel, the complex is made to run the most modern Russian Intercontinental nuclear missiles.
In recent years, the scale of the parade grew again as Russia began to fight, first in Ukraine and now in Syria.

These wars have led to deep division and mistrust between Russia and the rest of Europe, but in Moscow the sidewalks the policy of force, met with applause. Despite the condemnation of the world, most Russians believe Putin’s foreign policy successful.

The game of the superpowers in Ukraine

“The current situation is much better than four years ago,” smiles Sergey Karaganov, leaning back in his chair. The man who in a recently published article called himself “doctor Strangelove Russia”, dressed in a light suit and a pink shirt with a turquoise tie. On the wall hangs a large leopard skin.

Sergei Karaganov is a veteran of the Russian foreign policy. His career was not interrupted even during the collapse of communism. 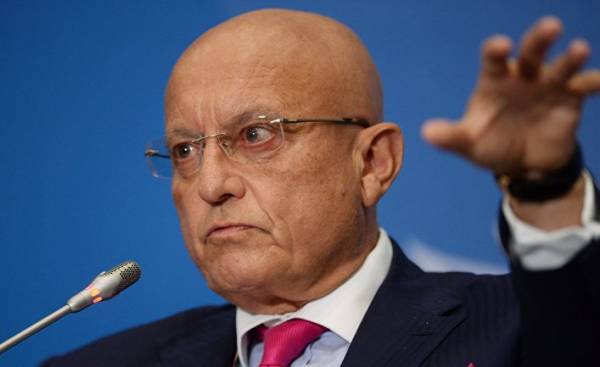 His name causes irritation in some former Soviet republics, because in honor of him called the Karaganov doctrine. This strategy was formed in 90-e years is that Russia is in favour of special rights for Russian-speaking minorities in the Baltic States and Ukraine to use Russian-speaking groups as a means of pressure on the countries in which they live.

From 2001 to 2013, the hospital held the official post of adviser to the Russian President on foreign policy issues and still be considered a person with influence in the Kremlin.

In conversation, he uses the vocabulary of official Russia. The turning point of the Russian policy was, for example, the time when Russia “decided to reunite with the Crimea”.

“Russia stopped American expansion. We changed the situation in Europe. Of course, he paid for it the poor Ukrainians, but let him say “thank you” to his own government,” says the Karaganov.

According to him, the war in Ukraine it is not so much about the Ukraine but about NATO and its eastward expansion, which Russia can no longer tolerate. The occupation of Crimea and support for rebels in Eastern Ukraine are, according to Karaganov, a defensive step by Russia.

“We should have realized it sooner, we should have stopped it sooner. The first rule of geopolitics: none of the great powers, especially Russia with its history, will not voluntarily give up their buffer zone. The whole country is built on security and defence, throughout our history, we are talking about the protection of the country. Therefore, we are particularly sensitive to the sovereignty.”

The reality is the competition

Sergei Karaganov today — Dean, higher school of Economics, one of the elite higher educational institutions of the Russian state in Moscow. He is a huge office with a reception in which four girls followed the order. The office is located in a XIX century building, “beautiful, but, unfortunately, a rather run-down”, says Karaganov.

Here is a former Russian analyst working on strategy and game of the great powers. In the last article, he writes about the positive role of nuclear weapons and said that Russia needs to make more emphasis on nuclear weapons in their military doctrines.

Klassekampen: You’re advocating a foreign policy that relies on military force. From my point of view, it is an outdated idea, is it not the policy of the last century?

Karaganov: Russia has always fought for its independence and its sovereignty. In addition, the Europeans have forgotten the history of the world. The reality is rivalry and competition. There will always be rivalry between people and Nations. History has no end.

Karaganov believes that the European elites have lost the ability to think strategically and use humanitarian intervention, as in Libya: “the Political elite of Europe should be hanged. When its bombing ousted Gaddafi, they’ve opened Pandora’s box. They opened the way for a huge flow of refugees across the Mediterranean”.

In March 2014, the Crimean Peninsula, in practice, became part of Russia, although the Ukrainian government and most of the world still consider him Ukrainian.

In September of the following year, Russia intervened in the civil war in Syria. Bashar al-Assad was close to defeat on the battlefield, but Russia saved the Syrian President.

“If we hadn’t intervened, ISIS (a terrorist organization banned in Russia — approx. ed.) would have won. Evil Horde would stand on the shore of the Mediterranean sea. In Syria, we stopped his plans of regime change,” says the Karaganov believes, however, that the main purpose of the war that Russia is waging in Syria is blocking the Americans.

In his opinion, in recent years, Putin has returned Russia to great power status. Its foreign policy the Russian President managed to fix some of the things that was lost during the collapse of communism. This does not mean that the hospital wants to go back.

“We have long fought to rid the world of the dream, given to us by the communism. Currently, we seek a new national identity,” he says.

“For many years we were accused that we were Communists-atheists. Now Europe has become a godless”.

The sentencing of the West is associated with Putin’s strategy of turning to the East. As his former chief, Karaganov is a supporter of Eurasianism — the idea that Russia needs to turn more towards Asia.

“The world is moving in the direction of the East. Europe thought that the EU will always expand. But it’s not. Europe may soon break his neck,” he says.

Former Advisor to Putin on foreign policy enjoys the support of wide layers of the population of Russia, when he says that Europe no longer seems attractive to Russian citizens. When Ukraine erupted into war, the Russians changed their attitude to the EU.

Before the war about 60% of the population had a positive view of the Union, but, according to the Levada center, occupying a public opinion survey, this figure dropped to 20%.

64% of Russian citizens believe that the integration of the Crimea — for the benefit of Russia. At the same time increased the confidence of Russian citizens in their country. In 1999, only 31% of the population considered Russia a great power. Today this figure has doubled.

Wars are a distraction

The rapid growth in the popularity of Putin after Crimea made a number of critics to argue that they didn’t use the President of the war to increase his popularity at home. Lilia Shevtsova refers to those who suspect that Putin used the war as a means to achieve other purposes. 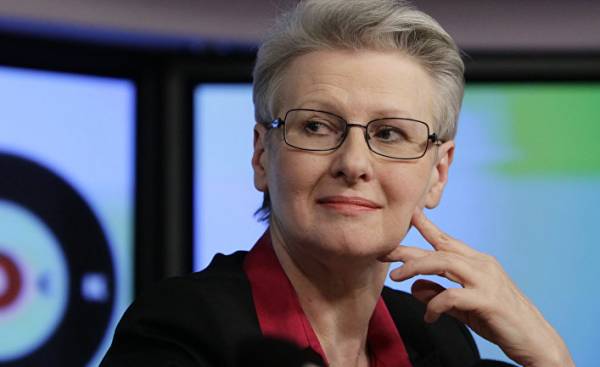 “Foreign policy is a way to divert people’s attention from the crises in the country,” she says.

I worked for many years in Moscow government circles and outside those circles. In the 80 years she was in charge of the state analytical Centre for European policy studies. She was a journalist and wrote critical articles about the regime in the era of glasnost, and then returned to his former position and influence when Boris Yeltsin became President in 1991. She later published a number of books about Russian politics, and the American magazine Foreign Policy in 2008 brought her in the list of the most famous intellectuals of the world.

We are talking about survival

Shevtsova believes that Europeans and Americans all the time misreading Russian intentions. It, she said, is not about ideology or the games of the superpowers. Vladimir Putin and his people first of all think about how to maintain personal power.

“Europeans have never understood the Russian policy. For Russia it is always about finding a balance between denial of the West and dependence on Western resources.”

To completely sever ties with Europe, Russia is too dependent on Western technology, she said. Russia does not want and is not able for too long to continue the great-power policy.

“Putin needs Western technology to develop oil and gas deposits in the Arctic. He can’t have them, if will be maintained the current level of the conflict”, — said Shevtsova.

Therefore, she believes that the EU and Russia will find a way to circumvent the sanctions, relations between East and West will gradually begin to come back normal.

“For years the Kremlin feels the West and look how far he can go without getting a response. The annexation of Crimea was a red line. That’s why the invasion began in Syria, it was only about how to get the US and the EU to forget Eastern Ukraine”, — said Shevtsova.

“Now that Donald trump was elected President of the United States, the Kremlin is paralyzed. He doesn’t understand what to do. Now the West is again pulled ahead,” she adds.