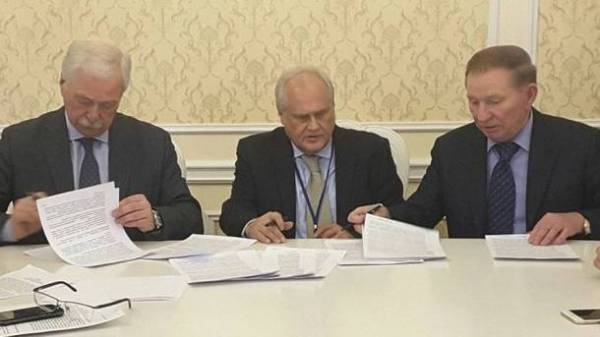 In the framework of the Trilateral contact group and the meeting of the subgroup on safety Ukraine firmly identified: no full silent mode it is impossible to further work. This was at the end of negotiations on their page Facebook reported the press Secretary of the Ukrainian representative in the Tripartite contact group (TAG), the second President of Ukraine Leonid Kuchma Daria olifer.

“We propose the investigation of cases of violation of ceasefire regime, in particular, yesterday’s shelling of MLRS “Grad”, which were injured one person and destroyed 16 homes. Still not investigated the case of the shelling of residential buildings in Avdeevka may 13, 2017, in which two children were left orphans. The Ukrainian side once again expressed concern about cases of violence and intimidation that occur in relation to the employees of the SMM OSCE in Ukraine uncontrolled part of Donbass: after the explosion of the OSCE SMM patrol fatal this aggression has become a trend. We insist on the admission of the representatives of the mission to all areas ARDLE, including the Ukrainian-Russian border. It is on areas close to the border often do not let the members of the OSCE SMM that fix themselves representatives of SMM of the OSCE,” she wrote.

According to her, the political subgroup of the Ukrainian side submitted its proposals on implementation of the Minsk agreements. “In our opinion, should be discussed, in particular, the abolition of the decree of the President of Russia about recognition of documents OGLO; the abolition of pseudosasa ORDO establishing quaternity; the rejection of raider capture of Ukrainian and European companies on the territory ORDO; the refusal of the ruble zone on the territory ORDO; the restoration of Ukraine’s control over the border and the creation of a working sub-group on the border. These proposals of the Ukrainian side handed over in pursuant to the agreements of the diplomatic advisers of the leaders of the Normandy four reached 6 April 2017. Russia again took a passive stance, not showing readiness to fulfill its obligations”, – she wrote.

In the humanitarian sub-group, as reported by Daria olifer, the Ukrainian party provided the results of the verification, which was attended by representatives of the OSCE, the security service, the office of the Ukrainian Ombudsman Valeria Lutkovska, as well as mother of detained persons.

“The verification was in full compliance with Ukrainian law and in accordance with the standards of international humanitarian law, compliance with privacy and discretion in the expression. Among the requested ORDO individuals reflecting their reluctance to be moved into uncontrollable territory, there are those who have already reached freedom, so freedom of movement does not depend on the state, and the state of Ukraine has no legal grounds nor to find their purpose of verification, or forced to move them to the territory temporarily uncontrolled authorities of Ukraine. Representatives ORDO continue to delay the work and require to verify those already released, which in itself is absurd. We insist that the rest of the week must be submitted lists of those who can be released, so that the release of people held already in June,” she wrote.

Within the economic subgroups, according to her, it was about the payment of supplies for the water consumed in ORDA. “We are ready to supply water and supply it, in spite of existing debts. It should be particularly noted: civilians uncontrolled part of Donbass of quasiplastic ORDO regularly collect money for water, raises the question of in whose pocket is the money going,” wrote Daria olifer.