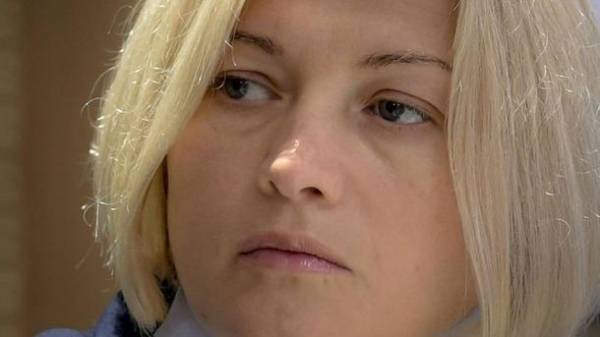 The trick is scandalous prankster Vitaly Seduce the Eurovision song contest influenced heavy international negotiations in Minsk, giving Russia an extra trump. This was stated by the representative of Ukraine in the humanitarian sub-group of the TAG, the first Vice-speaker of the Verkhovna Rada Irina Gerashchenko.

She said that in Minsk, Ukraine and the OSCE rigidly demanded from the Russian Federation and its controlled fighters prosecution and punishment of armed bastard who tried to humiliate the woman from the mission of the OSCE SMM and threatening her with a gun, allowed himself to sexual harassment to the naked watcher.

“And Yevhen Marchuk on security (sub-group), and then Kuchma in the Trilateral contact group demanded the name of this bastard, and a detailed investigation of the incident, and his conviction of the Russians, and prevention in the future. The arguments of the other side: Yes, this fellow was not very drunk and very armed, so, a couple of machines. And it’s just mental and cultural difference in communication, it just took a woman’s phone, and in your Europe just different meet, and the woman did not understand the “hussar,” – wrote Gerashchenko on his page in Facebook.

“But then the Russians allowed themselves the following passage: you clung to ORDO, well, think, people at the checkpoint decided to take the phone number of a beautiful woman. You have won the Eurovision song contest man butt naked in front of all the singer molested. And laugh… When colleagues in the security sub-group told me this story, had only one desire – to give that nasty ass slap… His shameful antics he allowed himself to humiliate the country and to give such dirty ammunition for our enemies”, – said the first Vice speaker of the Parliament.

However, she noted that the Seduc, which asserted itself on the stage of the Eurovision song contest, will be punished.

“A Thriller the Russians and especially ORDO not even condemned, because, think, demanded women sexual services at gunpoint”, she concluded.

May 15, Dniprovskiy district court hearing the case of trick journalist and prankster, the Eurovision song contest, released Vitaly Seduce until 12 July under the personal obligation.

The judge in his decision, noted that prosecutors were not able to provide the court with enough evidence that Seduc poses a threat to society or a potential evasion of the investigation.

It is noted that the prosecution demanded to arrest the prankster.

Also, now Seduc will have to report to law enforcement authorities upon request, and surrender of passport.

However, the journalist will still have to pay a fine in the amount of two minimum wages.