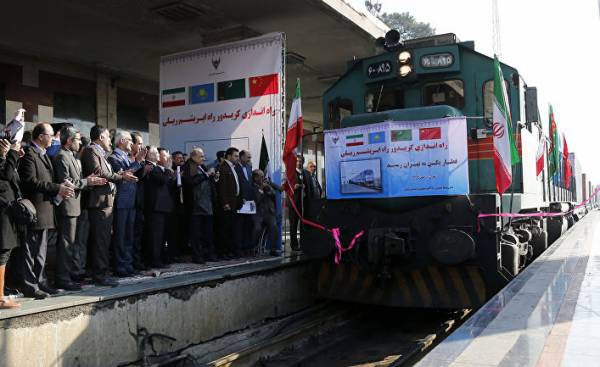 China’s ambition to expand its economic presence in Eurasia is most clearly reflected in the mega-project “One belt and one road”. This initiative will require enormous investments in large-scale expansion of the railway infrastructure, especially in Central Asia. But the planning and implementation of projects under this initiative faces considerable challenges, including coordination within China between different Chinese government agencies, and between China and Central Asian States.

The rail segment of the initiative “One belt and one road” is ambitious and very complex project. According to the plan, on the territory of Central Asia should be built (or expanded) three main railway line.

The Western “Branch №1” will be held from Alashankou (Horgos) in Xinjiang through Kazakhstan to the junction with the Russian TRANS-Siberian railway, and then the European Union through Belarus.

The Western “Branch №2” will run from Alashankou (Horgos) in Xinjiang to Kazakhstan and then in Turkmenistan, Iran, Turkey and possibly the EU. An offshoot of this route also reaches the Caucasus, crossing Kazakhstan and the Caspian sea (the goods will cross the sea part of the route on ferries).

And the Western “Branch №3” will connect the city of Kashgar in Western China to the city of Osh in the Kyrgyz part of the Fergana valley through the pass Irkeshtam, and then pass through the territory of Uzbekistan, Turkmenistan, Iran and Turkey to Europe.

Also has a “Branch №1”, bypassing Central Asia from Chinese Inner Mongolia to the TRANS-Siberian railway and then to Europe.

While the implementation of the plans of China is hindered by the lack of understanding by Beijing of the nuances of working in Central Asia and the inability of the Chinese leadership to consider important for the Central Asian States, social and cultural aspects.

When dealing with Central Asian leaders, the Chinese government presented the initiative “One belt and one road” in a purely pragmatic way and using economic terminology, stating that its implementation will benefit all parties involved. But many independent observers believe that such an approach does not take into account the many other important aspects.

First, from a political point of view, many Central Asian States is not like China, with its centralized political system. On the territory of Central Asia there are many different forms of government. Additional factors include different degree of cooperation of the countries of the region with Moscow and sometimes difficult internal relations between Central governments and local authorities in some of the countries in the region.

Second, the socio-economic sphere, Beijing officials apparently do not understand the concerns of Central Asian leaders who believe that a powerful Chinese economy can absorb their smaller economy and completely transform the state and society in the region.

Beijing also faces internal obstacles in the implementation of this ambitious initiative. One of the main instruments of Beijing for the solution of transport problems is the so-called policy of “international cooperation to increase production.” The purpose of this program is the opening production in the new locations instead of concentrating them in one place in China. Thus, one can solve the problem of overproduction and congestion of roads, which allows to increase the efficiency of export of made-in-China products.

Under this policy, Beijing encourages Chinese firms to go beyond China and to open factories abroad. State financial institutions have been instructed to help the withdrawal abroad of entire networks of production and Finance the construction of transport infrastructure in neighbouring countries, if it helps to increase the flow of exports from China. The recipient countries is also profitable because this system helps to increase production.

The problem is that the implementation of this programme was entrusted to the leadership of individual Chinese provinces, with the assistance of planners from the center. In particular, Chinese financial institutions will create financial instruments that would benefit from leadership at the provincial level.

But this strategy is quite risky. The biggest danger is the lack of officials at a lower level of experience of communication with foreign governments and organizations that can create significant problems. In addition, if we fail, all carefully arranged, China will “export” to neighbouring countries, their problems with industrial overcapacity.

To ensure the success of the initiative “One belt and one road”, Beijing will have to provide adequate training of local officials so that they can effectively conduct business on an international level. It is also necessary to ensure stable funding. Moreover, Chinese officials need to reconsider the approach to the Central Asian countries, it is better to explore the region in all its diversity and become more attentive to the concerns of neighbors in the social and cultural spheres.