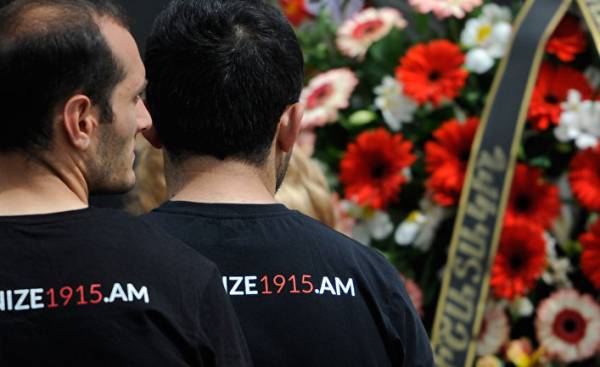 Today we celebrate the 102 anniversary of the Armenian genocide — events, in which violence is forever changed by the Armenian people and its Diaspora.

The systematic extermination of 1.5 million Armenians and forced those who managed to escape, to leave the country.

According to some estimates, 500 thousand Armenians became refugees, with the result that in the country there are only a third of its former population.

In the 20th century, Armenians were the first people who massively left their homeland. And, unfortunately, what is happening in Syria, very similar to the events of a century ago.

More than six million Syrians left Syria, and the international community makes enormous efforts to cope with this problem.

But contrary to alarmist statements about the unprecedented nature of the current crisis the world needs to remember the history of the 20th century, the lessons of which will help to develop a solution to the crisis that is unfolding at the European borders.

What lessons can we learn from the past

Now, when we celebrate the anniversary of the Armenian genocide, we should try to extract from the past lessons that will help us to effectively deal with today’s problems.

100 years ago the international community’s response to what at the time was an unprecedented inflow of refugees can teach us three very important lessons that will help us to cope with the current migration crisis.

First, it is crucial to recognize that the current immigration crisis is a problem all over the world, not just a specific region.

Although many Armenians settled in neighbouring countries such as Syria and Lebanon, some of the largest Armenian communities settled in such distant countries as USA and France, who gladly accepted refugees.

Countries such as Canada and Australia have assumed responsibility for support of Armenian families with housing, even though they had no relation to the persecutions against the Armenians.

Today the neighbouring country with Syria confronted with the largest influx of refugees, while many of the richest countries in the world have hosted small numbers of refugees and make the least effort to solve this problem.

It is now essential that, despite the rise of nationalist sentiment, the refugees met with a decent reception in the joint, just and global solution.

Leaders must actively promote this idea, and not to indulge their own political ambitions.

The second lesson is the need to change the interpretation of the situation with the refugees, turning them from economic burden into an economic benefit.

Although people often tend to focus on the present moment, we need to pay much more attention to the incredible contribution the Armenians, fleeing persecution, brought in the economy of the countries of refuge.

We need to focus on the fact that refugees contribute to the growth of employment and ensure the inflow of human capital.

History has proven that while refugees rebuild their shattered lives, they also enrich the societies, which opened before them, its doors.

It is not only in politics

The third lesson is that the solution is not confined exclusively to politics. In that terrible period of time a hundred years ago a great many Armenians were saved thanks to the courage, the kindness and humanity of the people who gave them shelter.

It often happens that complete strangers went to enormous risks to provide Armenians with food, shelter and medicines.

When we hear about the solidarity demonstrated by many people in response to the tragedy of the immigration crisis, it inspires strong optimism.

It is the actions of these people and communities can push for more decisive action to address one of the most challenging humanitarian problems of the modern world.

The stories of these people deserve to be told.

Today we announce the names of five finalists for the Aurora prize, which is awarded on behalf of all survivors of the Armenian genocide and as a sign of gratitude to their saviors.

Our goal is to pay tribute to those who dedicated themselves to the preservation of human life and promote ideas of humanism. Honoring these heroes, we hope to inspire other people to ensure that they drew attention to existing problems and address them promptly.

In fact, Armenia is still recovering from the events of a century ago, and the consequences of mass migration will remain forever with us.

That will tell the story

Several decades later, the same thing may be said about Syria, when historians will talk about current events in the region.

The number of Armenians in the world has recovered, and today approximately 10 million people and Armenia itself gradually reviving after a period of economic hardship resulting from the collapse of the Soviet Union.

This restoration was made possible largely due to the assistance that was once provided to the Armenian people at all levels and from many countries.

Today, the international community faced almost the same problem as 102 years ago.

But now we already have experience that can help us to make the right decision.