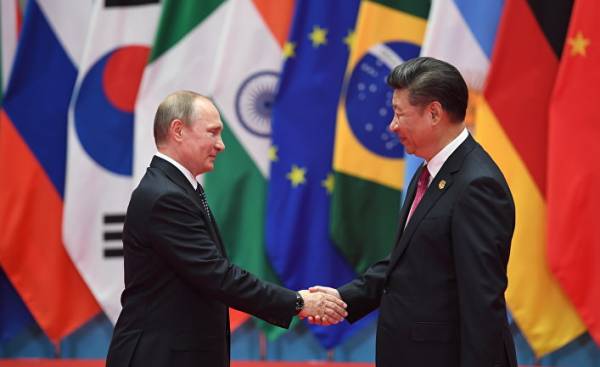 The script that must concern employees of us military planners is in the dark, but still rarely discussed the possibility that China and Russia will simultaneously enter into an armed conflict against the United States. Although alone Moscow and Beijing are not strong enough to go toe-to-toe with Washington in terms of a long war with high intensity of hostilities, and their concerted joint efforts, of course, could create a superpower in serious trouble. This scenario is quite rightly perceived as extremely unlikely, partly because one of the important lessons of the cold war was, it seems, the erroneous vision of the Communist bloc as a whole structure, in fact it was badly fractured. Perhaps, the tragic war in Vietnam could have been avoided if Washington has a better understanding of such splits.

But the world has changed, and proof that Moscow and Beijing are becoming every day closer, is obvious. Among the latest examples of their geo-strategic enterprises can be called, among other things, a large Chinese delegation at the recent Russian Arctic conference in Arkhangelsk, more active support of Russian intervention in Syria on the part of China, as well as the abstinence of the two powers regarding their categorical objection to the deployment of American missile complexes THAAD in South Korea. Earlier I mentioned the amazing frankness with which the strategists in Beijing to discuss the future of the long-term policy of China on the refusal of the unions [不结盟]. The strength of these discussions is reflected in a published edition of Chinese Foreign Policy [中国外交] the article entitled “to Conclude a Union with China? Russia’s national interests and the likelihood of a Sino-Russian Alliance”. [与中国结盟吗? 俄罗斯国家利益与中俄结盟概率].

The article presents a Frank and realistic arguments in connection with this issue of critical importance to the future of world politics, and therefore in this release of “dragon Eyes,” I’ll formulate the thesis of this fascinating article. First of all, the author suggests that the potential of the Chinese-Russian Alliance could be the revolutionary strategy [改变现状的战略]. In addition, he suggested that such an approach is supported and other significant strategy of Beijing, such as Zhang Wenmu, who said that the policy of curbing the United States encourages China and Russia to build a strategy of contrastirovania [即美国遏制与中俄反遏制]. The author of this article concludes that the Alliance could become “an effective tool” against “American pressure.” Question huge base of natural resources of Russia are also considered to be very relevant and the context of future reflection of the Beijing on the subject.

And yet most of the article devoted to criticism of the proposal to the official unification of China and Russia in the Union. In this work, we widely discussed the possibility that this Alliance will not be viewed as a protective reaction, and as offensive [具备一定的攻击性] and aggressive step. On the one hand, the author gives alliances against the classic argument of “the trap”, noting that China could be drawn into unnecessary military conflicts. On the other hand, the author notes that Russia hardly needs the help of Chinese military forces. In addition, the article mentioned several times the fact that the process of transforming the economic strength of China’s military is relatively slow [经济实力向军事实力转化的速度相对更慢], resulting in a time lag, despite the more obvious economic impact. And although this is not stated, the author is, I think, implies that the continued military weakness of China is an obstacle to the creation of the Alliance with Russia due to the fact that the first may not be seen as a fairly effective partner. The author, however, nevertheless, surprisingly clearly indicates that in a hypothetical Alliance senior partner is China, largely due to its economic weight [中国…占优势的情况]. But appeals for aid in the framework of this Alliance will be more with him, given the already obvious strategic pressure on China from Washington and reorienting the past in the Asia-Pacific region. Internal tensions within the Union between China and Russia the author shows, using the assumption that Russia can say, we have strategically benefited from the us “rebalancing” and the Sino-Russian Alliance may result in some contradictions in Russian diplomacy, for example, in a fairly extensive trade relations of Moscow with the countries of South-East Asia.

This analysis shows that the crisis in Ukraine, world politics fundamentally changed. Indeed, as noted, Russia in a crisis situation depended on their military forces, and the crisis is hardly eliminated the pressure against China. The author insists that the main priority of Russia will remain the improvement of the economy [俄罗斯…经济发展任务十分严峻], and this will depend primarily on improving relations with Europe and the United States. Applying similar logic, it also notes that on many issues the U.S.-China cooperation can end, if China will decide on the continuation of active rapprochement with Russia. The author also notes the progress made by Russia and China, the local superiority in problem areas, giving reason to assume that the Union may not be needed. Finally, he raises the question of Russia’s cultural relationship to China. According to the analyzed article, surveys have shown absolutely positive attitude of China to Russia, what can be said about the Russians.

However, this analysis is not entirely pessimistic about the prospects of Chinese-Russian Alliance. The author comes to the following conclusion: “we Can predict that Russia will be the main target of China’s efforts to build alliances” [可以预见的是俄罗斯将成为中国结盟的最主要目标]. It goes on to explain that “in the fight against pressure from the United States and its allies, China needs a state with which he could engage in close cooperation to form a reliable strategic rear, and the state is — Russia”. As positive examples of the potential promises of the Alliance observed a consistent annual military exercises undertaken in 2012, almost simultaneous strategic moves against Japanese claims to the Kuril Islands. In addition, the author says that the increase in supply of Russian oil and gas will increase energy security of China. It also implies coordination between China and Russia on difficult diplomatic issues such as Iran and North Korea. In an intriguing concluding remark the author makes a prediction: “the Growing power of Russia will allow it to strengthen its position in the Alliance. After ten years the probability of a Sino-Russian Alliance will increase” [十年以后… 中俄结盟概率将上升.]

This Chinese study with its impressive objectivity can hardly be regarded as an uncompromising endorsement of such a Union. The preservation of some of the most important aspects of modern Russian-Chinese cooperation in the framework of the “political and moral support” [政治和道义支持], and the author apparently recognizes that both partners are quite satisfied with the high and steadily increasing levels of cooperation. They do not see much benefit in documenting partnerships, at least in the short term. The author States that “the cancellation of the old policy on the refusal of the unions should not be confused with the choice in favor of the conclusion thereof” [放弃不结盟政策并不意味着选择结盟]. This vague statement means, most likely that Beijing planned a long and gradual process, during which it would be wise to avoid any rash moves. It is noted that the Chinese government has already adopted a policy of “laying the foundations for the countries with a strategic advantage” [打造战略支点国家] that has probably the same connotation in the context of this discussion.

For the last consideration point is the conclusion of the author that “the American strategy of compression and containment has not yet reached a level at which the formation of the Alliance between the two countries would be extremely necessary.” [美国的战略挤压和遏制也并没有达到需要两国结盟应对的程度]. This statement laid a veiled threat: if Washington is focused on the intensification of the process of “rebalancing”, one of the possible answers Beijing would actively search formalized military partnership with Moscow.

Lyle Goldstein is associate Professor of Chinese Maritime studies Institute (CMSI) at the naval war College in Newport, Rhode island. Set out the views of the author and do not reflect the official views of the U.S. Navy and other agencies of the U.S. government.