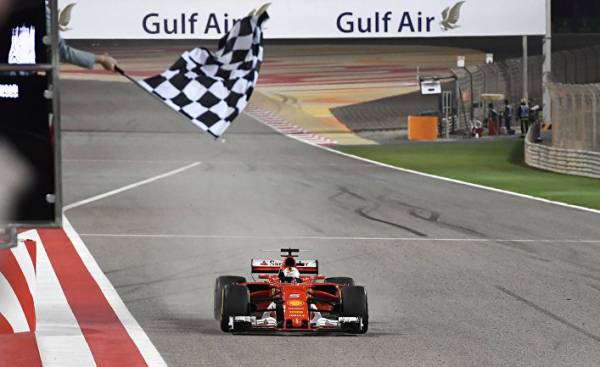 The Bahraini regime does not miss any opportunity to talk on television about the wonderful state of Affairs in the country, as if all that is happening in Bahrain is different from the incidents, disclosed by human rights organizations. Formula 1 is one such opportunity, which uses the mode to change and clean his stained blood of the innocent image.

On the website Bahrain International circuit sahir (the circuit was built for racing in 2004, its construction cost about $ 150 million — approx. ed.) has an appeal to fans and racing fans of Formula 1: “visitors will have a wonderful time, filled with pleasure from the various events that await you during racing competitions. You will be absorbed not only the race of the Grand Prix, but also various events and concerts that will be held just for you.”

The regime puts all these ads have a specific and concrete goal, namely, improving its reputation and change its image in the eyes of the local population. In 2013, in an interview with The Guardian, Lord Tim bell, the founder of the British company Bell Pottinger and in the 80 years the head of the election campaign, Prime Minister Margaret Thatcher, said: “I am deeply convinced that a few words and a strong visual image can change people’s thinking”.

The British researcher John Lubbock has calculated that since the start of the “Arab spring” until 2013, the government of Bahrain has spent at least $ 32 million in order to restore his reputation and control your image. He wrote: “Perhaps there is one way to solve the problem of your reputation in the country — to welcome reform and stop committing gross violations of human rights, ha-ha, just kidding! Obviously, this secret information: you have to spend millions to invite journalists to the race track Formula 1”.

Thus, it can be concluded that the Bahraini regime uses sports event for their own purposes. The sounds of gunshots could be heard far from the motorway, alert “hunting” for people participating in the demonstrations. Officially, Bahrain is solemnly to hold international race in order to show everyone that in the country there is a great atmosphere. At the same time, statements and shouts of demonstrators demand their rights, foreigners will be entertained at the event.

Pakistanis, Afghans, Indians, Baluchis, Jordanians, Iraqis, Syrians… will be on stages and concerts, at that time, as Bahrainis from fathers to grandfathers are to suppress the uprising in their villages and on the streets that take place every day in the Bahraini towns in recent months.

The situation, which depict Bahraini authorities do not fully coincide with what’s going on there really: marginalization, exile, religion and customs targeted, prisons are overcrowded inmates of different age groups, the company arbitrarily firing employees, and villages are now the names of the martyrs.

In 2013, in his article Lubbock back to 1950 years, to the point where there have been important political developments in Bahrain. British researcher said: “in the past Bahrain has made efforts to improve its reputation through loud and disastrous plans, for example, operation of the Concorde (Concorde). Now the authorities again attempt, but this time use the Formula-1”.

Race Formula 1 which is watched by millions of people around the world, is considered the Bahraini authorities only as a way of improving the reputation and ugly image of the authorities, shedding the blood of innocent people. Bahrain is not the only country to use this race. In the 1980s, during apartheid in South Africa, pursuing the same goal, the authorities also resorted to holding the Formula 1 race.

The official celebration of this event does not coincide with the real situation occurring on the streets of the country. Tweets and posts of Bahrainis indicate that the events held by the authorities of the regime, only need that to cover the complex situation in Bahrain. The problem is not the race itself, and the people who are willing to cover up the crimes of the authorities.

Wall Bahrain is surrounded by the speeches of the people. On the walls elevate and raise the image of the greatest scientist of Bahrain Ayatollah Sheikh Issa Qassem, surrounded by Bahrainis who refuse to attack him. In addition to photos of Sheikh Qasim, on the walls one after the other develop images of martyrs and detainees… moreover, hung prohibited slogans against the king and against what is now called the “blood race” because of the events that took place in 2012 and 2016: the death of the two martyrs of Salah Abbas and Abdul Ghani, aged 17 years.

Currently, all these slogans and images are actively moving within the country, and the Bahrainis have determined its position: “Stop “bloody race”!”.

Why “bloody race”? Bahraini activist living in London, Musa, Abdalla answered this question: “the people of Bahrain see that this race gets their own blood, and of course they are against it, hence there is the name”.

According to the activist, Abdalli, for all these events is the heir Salman bin Hamad al Khalifa, who is trying to govern pragmatically, hiding any expression of protest.

In connection with the international race, the government of Bahrain has promised to implement reforms in the field of human rights in the country, but all this was done only on paper, as well as various obligations and promises that were given to the people.

Bahraini authorities use certain policies in order to improve their reputation and image. The main message of the race of Formula 1 to other countries, according to Musa, Abdalla, is that “there are no movements and parties are calling for the overthrow of the regime, even its reforms.” The authorities want to use their reputation for making political deals, and, most importantly, economic transactions that could lead the country out of crisis.

The holding of an international race is a kind of message to the outside world, not for the local population. Bahraini activist read a statement made by the authorities of the country: “the Regime is still strong and ready to move forward without reforms to eliminate corruption and without having to stop the arrests and repression of demonstrators”.

The regime of Bahrain reaffirms its statements with action. Every day there are raids and arrests, and are submitted and executed death sentences. Moreover, the local population is constantly intimidated by the military courts.

During the country’s huge sporting event, the Bahrainis are marching against the use of his power for their own selfish purposes, against ignoring by the authorities that happen in the villages. This year the event will not be quiet. Noise and hum, which was raised by residents of Bahrain, reach the media, every day calling people to the “fun and pleasure”. Abroad, the media will find something that requires their attention: the pictures of detained children of martyrs and leaders sitting in prison. They will all be inaccurate due to fog and dust, which plunged the village, hoping to find security.