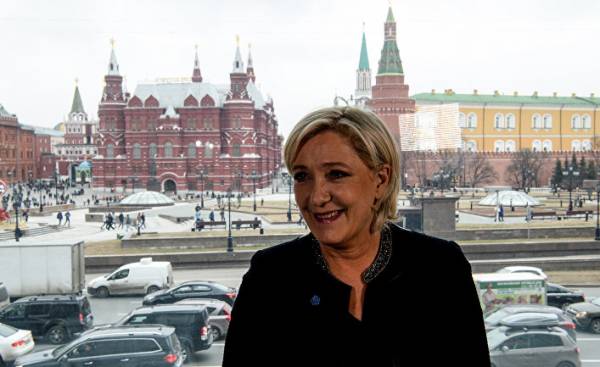 An expert on relations between Russia and the far right Anton Shekhovtsov explains that the patriotism of the European ultra-nationalists like the National front in France actually deceptive, since they are all subordinate to the Kremlin.

In the early 1980-ies Tireur Jean (Jean Thiriart), the ideologue of the Belgian neo-fascism in the postwar period, called for the formation of the Euro-Soviet Empire, a kind of fascist / Communist superstate in the territory from Vladivostok to Dublin. He was convinced that Moscow could “make Europe the European” as opposed to “Americanized Europe” and advocated full cooperation with the Soviet Union.

With this cooperation or rather collaboration it, by the way, the sign is not hearsay because it went to the Waffen-SS in 1940-ies, for which he was condemned after the liberation. In the 1980s, he was ready to swear allegiance to another totalitarian regime: “I first will put on the hat on the red star. I, of course, in Soviet Europe.”

Tirira dreams did not come true, but he has found followers that are willing to cooperate with the authoritarian regime of Vladimir Putin, since he, in their opinion, too, aims “to make Europe the European.” We are talking about right-wing politicians and activists, who see in Putin’s Russia “stronghold of traditional values” and “ray of hope” in their fight against liberalism and a United Europe.

The Putin regime, in turn, enjoys far-right allies in order to weaken the European Union and undermine social peace in the societies of European countries. Putin is well aware that the nationalist movement are a danger to socio-political unity of States: its mode suppresses not only the democratic opposition but opposed to the power of ultra-nationalist movements. The ultra-right European allies of Putin this may seem surprising, but he advises nationalists to “remember that Russia was formed as a multinational and multiconfessional state from the outset”, and that nationalism is destroying Russia’s “genetic code.”

Anyway, all this does not prevent Moscow to exert political, informational and in some cases even financial support for ultranationalist parties out of the cynical expectation that in case of their coming to power, they would threaten European unity and will make the state more vulnerable to corrupt Russian oligarchy. All this, in turn, exacerbate social inequalities and weaken the position of Europe against the great powers like USA, China and India.

If the European right-wing parties understood that the international status of Europe owes much of Western unity, at least they did not call themselves “patriots”. What is Patriotic is to cut the branch on which you sit? However “Patriotic” movements like the Austrian freedom party, the Italian Northern League, the Bulgarian “Attack”, “Alternative for Germany” and the French National front are showing great naivety aspiration behind the scenes to undermine the security of Europe. And they do not even hide that they do it for Putin’s kleptocratic autocracy.

A loan of several million euros

In December 2016, APS signed an agreement on coordination and cooperation with Putin’s “United Russia”. The Northern League did the same in March. Marine Le Pen, in turn, repeatedly visited Moscow in 2013, while the national front has received a loan for several million euros from the First Czech-Russian Bank, which was owned by close to the Kremlin businessman.

Marine Le Pen may be as much as to say in a campaign video that he wants, “the French were able to live in an independent France”: its foreign policy positions indicate that she, like Tiriara, will not hesitate to put France in its dependence on Russia.

In 2013 it is obvious that her perception of foreign policy, in particular as regards Russia, based on the position of the Kremlin. For example, during a visit to the Ukrainian Sevastopol in 2013 (when he was not yet annexed by Russia), Le Pen called for the Association agreement of Ukraine with the EU.

However after the first trip to Moscow in the same month, she criticized Ukraine’s rapprochement with the EU and voted against the Association in the European Parliament. Since marine Le Pen began to hold regular meetings with Russian officials, none of its statements no longer contradict the Kremlin line, whether the repression against the Russian democratic opposition, the invasion of the Ukraine, or Moscow’s support for the murderous regime of Bashar al-Assad.

Becoming a parrot Russian disinformation, Le Pen does not just return the debt to the Kremlin, it promotes rhetoric, because it expects to continue to receive her financial aid. Therefore, Le Pen is not not only their own view on international relations, but also self-esteem. She tried to get a meeting with a senior representative of the Russian government in 2011, but no one to invite her to Moscow, because the Kremlin was waiting for the results of the elections of the President of France 2012.

The Russian government has attempted to maintain good relations with the elected President (whether Francois Hollande or Nicolas Sarkozy), and they are not the best way could impact the invitation to Moscow, Le Pen and her expression of support before the election. Only after President Hollande has criticized Putin for helping Assad in June 2012, the Kremlin decided to switch to a tougher tone with France and to develop relations with the National front to undermine public tranquility in the country.

In 2016, marine Le Pen was the second choice for the Kremlin. That is why the National front failed to get a new loan from a Russian Bank (the First Czech-Russian Bank was declared bankrupt in 2016). Explains this and his problems with the Agency for Deposit insurance, which is including the collection of debts from borrowers of the liquidated banks and threatened to sue NetFront to the court for the return of the received credit. Once the Agency is an administrative body, it is difficult to imagine that his decision was not approved by the authorities.

NetFront has become a fallback because Moscow expected the development of the political situation in France. At the end of the primaries right she decided to play the card of françois Fillon, who is known for his conciliatory attitude to internal and foreign policy of Russia.

And only after Fillon began to lose popularity because of the scandal “, Penelopiad,” the Kremlin once again turned to Le Pen and even invited her to Moscow to show that it is the favored candidate of Putin.

After the obvious of Moscow’s interference in the US presidential election last year, European companies have become more vigilant to treat the Kremlin’s attempts to influence the electoral process in Western countries. And France is no exception to the rule.