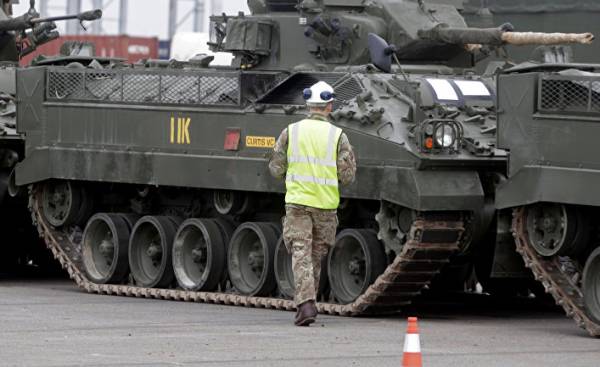 Nasz Dziennik: Estonia continues to position equipment and British troops from the 5th infantry battalion The Rifles. Whether it’s to impress Putin?

Zapalovsky Andrzej (Andrzej Zapałowski): Tactical units, which transfer to the Russian border, are of little value from a military point of view, they play only a role of a fashion model. The facts are that Russia knows the location of the British battalions who come to its border, and to wipe them off the face of the earth enough, in fact, one impact of the Russian tactical missiles. So the presence of the allied forces in the form of a battalion or even brigade has absolutely no strategic value.

– In which case we can talk about real power?

— The decision to strengthen the Eastern flank of NATO was taken last year at the NATO summit in Warsaw, the presence of the allied troops became its consequence. Below tactical units actually were effective, their strength must reach thousands or even tens of thousands of soldiers. Please note that Russia has organized on its territory task force, whose numerical strength comes to hundreds of thousands of people. If the Americans and the British want to balance forces and to fight, they will have to bring its military from around the world. The United States has hundreds of bases around the world, if necessary, to balance that the potential of Moscow to be able to commit to combat, they will have to pull out the aircraft, tank equipment and so on. To conduct such a complex from the point of view of logistics of the operation will require a lot of time: one to two months. Anyway, NATO forces are battalion-sized or brigade that host is now on Eastern flank, it is only a matter of prestige, in the military a large role they play.

– Is there something that can act on the imagination of Putin in military terms?

— In fact, he may be affected by the establishment in our armed forces several additional surgical teams and real territorial defence forces numbering several hundred thousand people. Of course, Russia will be able to cope with such forces, however, in the political, economic and military terms, it is unprofitable. Real support from allies will be able to get your own armed forces that are able to survive at least a month.

– This means that the new battalions do not represent a danger for Russia?

— I will say more: the threat from their side for Russia is practically zero.

– What game in this case are the Russians?

The Russian game is conceived on a large scale: it aims to drive American troops from the European continent. Moscow’s actions are subject only to this goal, the rest is just theatre. It should also be understood that in the event of armed conflict, land forces will play a secondary role, and the key value will get missile forces. Their advantage is that they can hit targets that are not in 50 or 100 kilometers from the Russian border, and at a distance of several hundred kilometers. This means that the strike will be aimed at hundreds of NATO bases. To survive in such circumstances will be only those databases which have a reliable missile defence. To summarize, I repeat that the transfer of military units from Britain, Canada or Germany directly to the Russian border has no particular significance because of their small numbers. The Russians, of course, raise the noise, talking about this and will continue to do so, but from a military point of view it is not in danger.