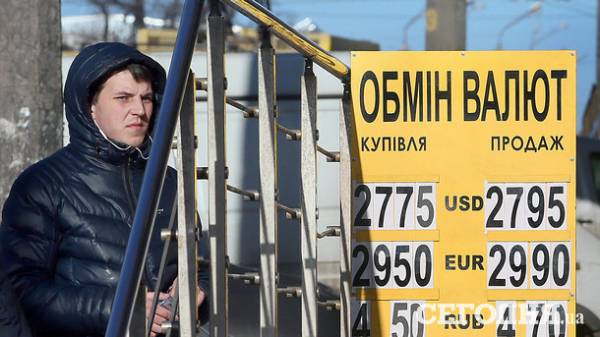 In April—June life of the average Ukrainian will change little in comparison with the first three months of the year, it says the economic forecast compiled by experts “Today” (see infographic). They promise the same slow rise in prices, as in January—March, a further gradual depreciation of the hryvnia and, accordingly, the cost of gasoline, as he recall, 85% imported and bought for hard currency, and oil in the world is not getting cheaper. From the good — pay rise more than prices, but unemployment will jump.

PRICES. In the second quarter, experts predict price growth from 4% to 8% compared to the end of December 2016, that is a promise acceleration of inflation. While prices, according to the state statistics service, over 2 month rose 2.1%, for the quarter is estimated to be up to 3%. Head of the Secretariat of the Council of entrepreneurs under the Cabinet of Ministers Andrei Zablovsky says that the main accelerators of growth of prices will be the increase of tariffs for postal and telecommunication services and passenger transportation by railway transport. The independent expert economist Ivan Nikitchenko noted that the prices will gradually grow in April and may, and June have possible zero inflation, and even deflation due to traditional seasonal decline in prices for vegetables and root crops.

But the analyst of Agency “MPP Consulting” Paul Miller is confident that inflation in the second quarter will be an average of 2% monthly to make up for the imbalance of the beginning of the year (when prices were kept low consumer demand for goods, as people spent more of money to pay for heating). 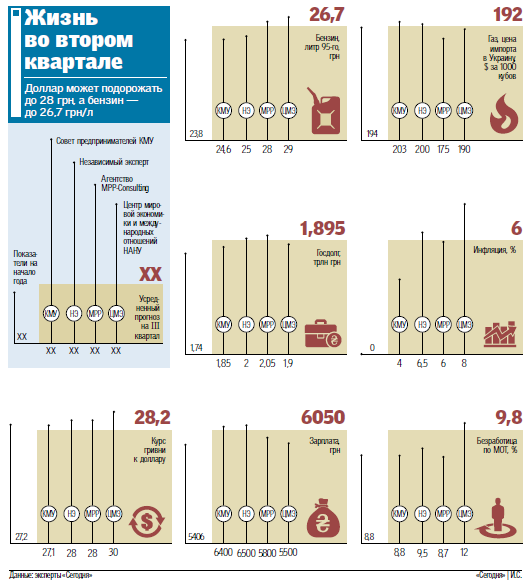 COURSE. According to forecasts Zablovskogo, the hryvnia exchange rate to the dollar in the second quarter 27-27,2 UAH/$, but the situation on the currency market can be characterized by some irregular. This is due to the possible postponement of the next tranche from the IMF, scheduled for may, the settlements of foreign debts and other things. Other experts believe that the hryvnia will weaken more — up to 28 UAH/$, and according to the forecast of the Center for world economy and international relations NASU, even up to 30 UAH/$.

SALARY. The average salary for July will amount to more than UAH 6000 is 600 UAH more than at the beginning of the year. Earnings will continue to grow, and faster than inflation, because of the “effect 3200 UAH”, some increase in the level of wages in the corporate sector and the improving macroeconomic situation in the country, said Zablovsky. It concerns the agricultural sector, processing industry, construction. The situation in metallurgy and coal industry worse.

PETROL. The ride will be more expensive. “The price of gasoline at the devaluation of the hryvnia will automatically go up, because the market is 85% dependent on imported fuel, paid for by currency. Plus taxes on petroleum products are also denominated in euros,” explained Zemlyansky. And Miller noted that “1 liter of gasoline = $1”, this is a standard balanced proportion. Now the usual liter of A-95 costs, according to consulting group “A-95”, is 24.5 UAH/liter, a premium (imported. — Ed.) 26,8—29 UAH/liter.

DEBT. Also continue to rise. “The national debt of Ukraine in the II quarter will be about 1,85 trillion UAH. The increase will occur due to its revaluation in connection with the devaluation of the hryvnia in early 2017,” explained Zablovsky. Miller, prognozirovanii more high dollar than Zablovsky accounted for 2.05 trillion. “The debt is growing faster than revenues, and it is unclear when and how are we going to give it away,” stated Miller.

UNEMPLOYMENT. The unemployed will be more a full percentage point (to 9.8%) in comparison with the beginning of the year because our government promised the IMF’s reduction of civil servants by 4% per year and the dismissal of the employers an extra set of hands in connection with the increase of mentorplace. “Real unemployment remains quite high, this concerns the so-called “hidden unemployment” (workers. — Ed.)”, noted Zablovsky. And Nikitchenko said that unemployment is still insignificant decline from the beginning of the holiday season and growth in seasonal employment.

GAS. But the gas is not expensive, according to Miller even cheaper: “Winter has passed, the consumption has fallen, demand has fallen even more. Given the trend of replacing gas with alternative fuels, we can expect an additional reduction in its market value.” Agree with him and Zemlyansky: “Summer, the low season, given oil prices, the average price will fluctuate in the neighborhood of $180-200 per thousand cubic meters. m”.

WHAT CAME TO PASS. Our consensus forecast for the first quarter was fulfilled by about 75%. Experts are almost correctly predicted the average rate of the dollar (+20 UAH/$) unemployment rate — forecast 10%, in fact, 9.7 percent. And also the price of gas and gasoline, the size of the national debt. More than 500 UAH (10%), they underestimated the level of the average salary and overstated the inflation forecast of 4% against the expectations of in fact 3%.