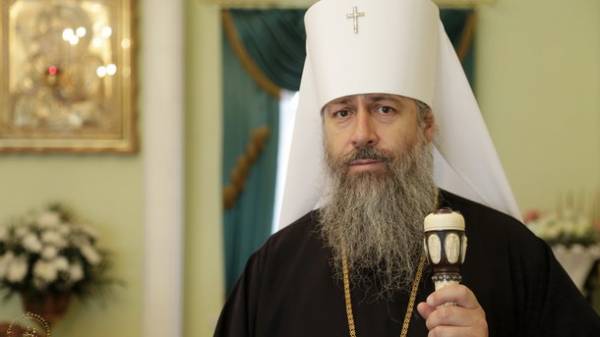 Bishop of the Russian Orthodox Church and the Governor of Svyatogorsk Lavra Metropolitan Arsenius (in the world Yakovenko Igor Fedorovich) was a Colonel of the FSB. About this in his blog on the “Explorer” wrote an officer of the APU Anatoly Kravchuk.

“Having been in the Svyatogorsky monastery, and happened to be there on several occasions and at different times, constantly from visiting remained some mixed feelings. On the one hand, again, strikes incredible beauty of the monastery located on the slopes of the mountains on the other – secretly eating some kind of strange feeling, if you find yourself not in a monastery, and the barracks,” he said.

Kravchuk added that for the military it works on a subconscious level and you don’t have to see soldiers and military equipment.

“Even like this, it would seem, is not significant detail of all the local priests somehow go in Yalova boots (it’s much cooler than canvas – soldier). Even asked why. Replied that they supposedly easier to stand in prayer. In boots???” he writes.

Especially left an imprint on meeting with the monastery’s Deputy Abbot, Metropolitan Arseny (in the world Yakovenko Igor Fedorovich).

“The most vivid impression – the man’s too lively mind, is clearly a secular orientation that simply catches the eye, if you have the ability to analyze. Besides, it is impossible not to note too pronounced professional skills of the propagandist. The impression that I communicate, and in the company of the Metropolitan had the opportunity to spend not one hour, not with a priest of high rank, and great prepared Fsbeshnik,” writes an officer of the armed forces.

“And now here you are, can’t believe my eyes, the page of such a Russian priest Nikolai Lukyanov posted the same in Russian, like himself, a social network “Vkontakte” see, BA, familiar all persons – Yakovenko Igor Fedorovich, but not vicar of the monastery and not even the Metropolitan, but a simple Colonel of the Russian FSB. Well, what an unexpected turn,” – said Kravchuk. 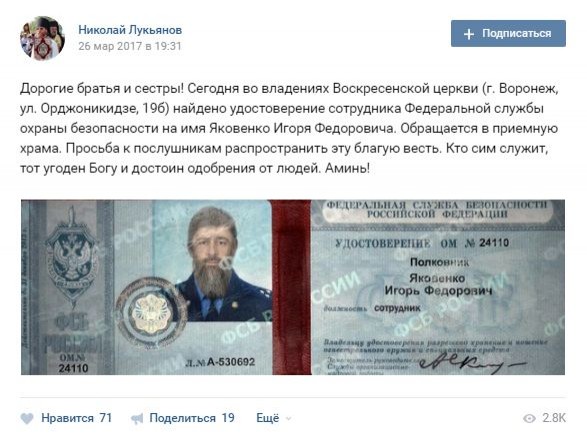 “Dear brothers and sisters! Today in the realm of resurrection Church (Voronezh, Ordzhonikidze St., 19b) is found the certificate of the employee of Federal service of security in the name Yakovenko Igor Fedorovich. Refers to the reception of the temple. Request to the monks to spread the gospel. Who serves in this way is pleasing to God and approved by men. Amen.” – wrote pop Lukyanov of the Russian Orthodox Church.

According to the officer APU, it has now become clear why Moscow priests in the Donbas are the mountain for Putin, justifying war and shamelessly trampling on God’s commandment – “thou shalt Not kill”. Why in Slavyansk Church made a warehouse for weapons, taking down the gang of Girkin in 2014, which actually ignited the war in the Donbass.

“Why the Russian Orthodox Church of the Moscow Patriarchate, practically the roots cleaned from the true clergy over 70 years of bloody atheism of the Soviet government, now suddenly revived and so widely used the highest leadership of Russia, consisting of the former KGB, which this Church and destroyed. Not clear remains only one, why the Church still is the good news about our Lord, spreads in Ukraine “good news” about the Russian lost Fsbeshniki, about Putin and the “Russian world”, although, as they say in the world – who pays the dancing,” writes Kravchuk.