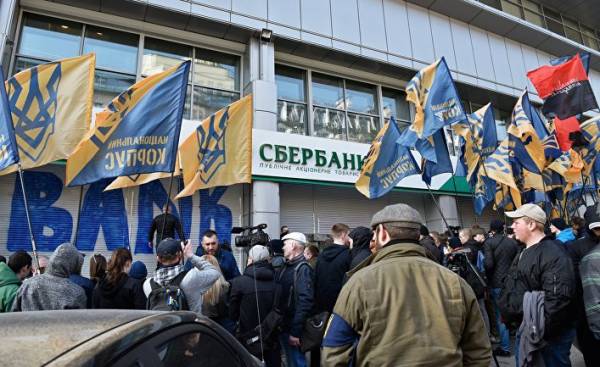 The price of sale of Ukrainian “daughter” of Sberbank consortium of investors is not yet known, but it will significantly lower the Bank capital, which is estimated at $140 million After closing the transaction, the Bank will change its name, as already stated by its new owners. However, the future of the asset rather vague.

PJSC “Sberbank”, which today is a subsidiary of the Russian Sberbank, is expected in 2017 will be sold. Earlier it became known that Sberbank has agreed the sale of its Ukrainian asset to two British citizens of Russian origin. Said he is the majority shareholder of the consortium in which it owns 55%, Grigory Guselnikov owns 45%.

“Apostrophe” already wrote that both the buyer of the Ukrainian savings Bank is indirectly connected with the Russian Bank. It is possible that this financial institution has decided, using the opportunity associated with the introduction of Ukraine sanctions against Russian state-owned banks, to purchase, say, “on the cheap”, a tasty asset.

It is no secret that in recent time, PJSC “Sberbank” bear the losses. Last time the Bank took profits in 2014.

According to the national Bank of Ukraine, January 1, 2017, Sberbank had assets in the amount 48,356 billion and took the measure of the 6-th place among 93 operating in the country banks. In 2016, the Ukrainian “daughter” of the savings Bank received a net loss of $ 2.82 billion UAH.

Said he is the son of Mikhail Gutseriev, one of the richest Russians, co-owner of Binbank (39,3589 %). Cousin Gutseriev-younger Mikail Shishkhanov — majority shareholder (59,4064 %) and the President of the Bank. The clan Gutseriev is considered the richest family of Russia according to Forbes magazine, its General condition is assessed by the publication of almost $10 billion.

Binbank — one of the leaders of the Russian banking market, among the top 30 largest credit organizations of the Russian Federation (at the end of 2016 occupied 12-e a place).

B & n is known for its policy of acquisitions of other financial institutions, primarily in the regions of Russia.

In 2008, the Bank entered the capital of Bashinvestbank, and in 2013 joined the status of the branch in Ufa. In 2014, the Bank became the owner of Moskomprivatbank, one of the leaders on the Russian market of Bank cards. At the end of 2014, it was announced that the Bank acquires five banks of group “Growth” in their financial recovery.

In 2015, the Bank bought Uralprivatbank (Ekaterinburg). In the same year purchased a controlling stake in MDM Bank.

In 2016, the Bank was joined DNB Bank (Murmansk), which were previously included in the largest financial group of Norway DNB.

Grigory Guselnikov in 2001-2010 he worked in the Bank, including, since 2008, its President. In 2010, he left the Bank to concentrate on the development of “Vyatka-Bank” (Kirov, Russia), which belonged to his family.

Experts admit that the JSC “Sberbank” adding to the Treasury of the shareholders of the Bin group (now known as Safmar).

“Now nothing can be excluded,” say “Apostrophe” head of analytical Department of investment company Concorde Capital Oleksandr Parashchiy, answering the question of whether “daughter” of Sberbank to be under the control of the Bank.

“Most likely the Bank is expanding its presence in the moment”, — said in the commentary edition of the member of Ukrainian society of financial analysts, chief financial analyst of RA “Expert Rating” Vitaly Shapran.

Although the group itself denies this. “Group “Safmar”, b & n have nothing to do with this deal. It is the personal investment said Gutseriev” — said “RIA Novosti” head of Department of information policy and strategic communications group Sergey Luchenkov.

After closing, Sberbank will change the name. About it in interview to “echo of Moscow”, said Grigory Guselnikov. “It will be renamed. Apparently, he will be named Norvik Banka, because it will be a child of European Norvik Banka”, — he said.

Guselnikov refused to name the price at which the consortium acquires the asset, citing, in particular, a relevant agreement with the seller.

Experts believe that the JSC “Sberbank” today is not more than $100 million.

Alexander steam gives a more specific assessment: “the Price may be within half of the Bank’s capital, or about $70 million.”

However, the sources of Russian “Kommersant” called another amount — about $130 million.

The national Bank of Ukraine (NBU) has not yet received official notice of sale of PJSC “Sberbank”. However, most likely, the national Bank is aware of the conditions of the forthcoming transaction at least at the informal level. And it can not but rejoice to the NBU, since the tense situation around the “daughters” of Russian banks, in particular, “Sberbank”, is not conducive to improving the international reputation of the banking system of Ukraine.

“The regulator is more than interested now in how to relieve the situation, creating an unhealthy excitement around the banking system, because constantly there is a certain element of instability and chaos. In addition, this all looks very bad in the eyes, including the IMF, which never welcomed illegal mechanisms of pressure. And, then, special problems in the matter of the purchase agreement will be. Especially if the company has a European jurisdiction, it will be considered as plus in the process of negotiating this issue,” — said in comments “Apostrophe” Advisor to the President of the Association of Ukrainian banks Alex Kush.

However, despite the obvious European future shareholders of PJSC “Sberbank” in respect of the forthcoming transaction remain many questions.

In particular, it is unclear why the Bank will be called Norvik Banka, if the Bank is the majority shareholder in acquiring his consortium (the parent Bank may subsequently increase its share, but why is this not done at the time of purchase)? What is the role of an unnamed Belarusian company through which PJSC “Sberbank” buys said Gutseriev? What are the real motives of buyers of Ukrainian “daughter” of Sberbank?

“These shareholders 100 years do not need a Bank in Ukraine. They buy it at the large request of someone in the Kremlin. Or the Kremlin itself. And now the main thing — to understand what will happen next,” he said.

According to experts, this situation entails two options. “They buy it to drain. Or to hold until better times,” — says Fursa.

The answers to all these questions, obviously, will appear soon.

Also do not expect in connection with the sale of PJSC “Sberbank” quick withdrawal from the Ukrainian market other state-owned banks of the Russian Federation. Thus, in particular, considers the head of analytical Department of investment company Concorde Capital Oleksandr Parashchiy.

Agree with him and Vitaly Shapran. “I think that (selling “daughter of” Sberbank) will not accelerate, but rather to satisfy the raging public,” he said.