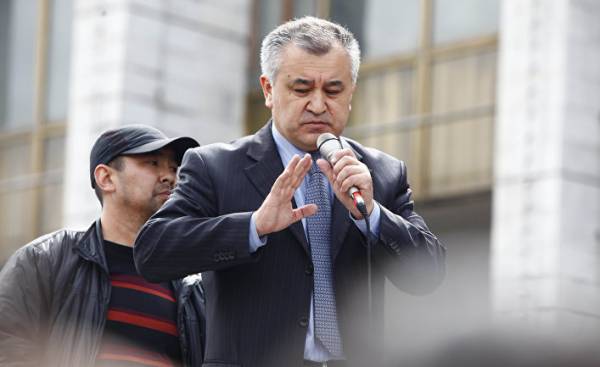 Before the security services came for the site by Tekebaev, they detained a number of other opposition politicians.

The arrest of the leader of the party “ATA-Meken” Tekebayev last month, echoing up throughout the country against the backdrop of escalating confrontation between the hotheaded President Almazbek Atambayev and his critics.

Tekebayev is one of the most visible politicians in the country. Although its impact is reduced, it still enjoys support in his stronghold, the southern areas of the country, erupted after his detention, protests were to be expected.

But, as observers and human rights activists, to Tekebayev was also arrested many other opposition politicians, and the circumstances of their detention raises doubts about the legality of the ongoing in respect of these investigations.

“The scheme is simple — denigration, defamation, arrest, and then the lack of desire of the investigation to objectively consider the process,” said a member of the Committee for defense of political prisoners Zulfiya Marat.

Now in remand prisons of the State Committee for national security (SCNS) contained at least nine members of small opposition groups. And the history of their detention are very similar.

About March 22, 2016 in the Internet appeared the recording of telephone conversations with full text transcript. On the records of the people whose voices resemble the voices of a number of representatives of local parties, including Vectura Asanova, Kubanychbek Kadyrov and Bolatbek Turgunalieva, ostensibly to discuss ways of organizing the riots. On one record, the interlocutors expressed the desire “to bring people to the streets” and “to seize the White house” (Parliament building).

Not explaining how it was made these records and how they ended up on the Internet, the national security Committee hastened to assure the public of their authenticity.

“The SCNS said that the records appeared on the Internet, confirmed… other audio recordings made of the SCNS within the earlier criminal investigation,” the statement reads SCNS.

The representative of the national security Committee also stated that because in conversations mentioned the “unconstitutional actions”, it was necessary to take action. Asanova and Kadyrov later arrested, but Turgunaliev, apparently, still at large.

He Asanov has repeatedly stated that the record is “installation”, and the case against the opposition “fabricated”. The former Governor of Jalal-Abad region really organized at that time a small, peaceful demonstrations. In an interview to the Kyrgyz publications he said that if the members of the United national movement and intended to change power in the country, it is only in the framework of the law.

In mid-March Asanov and his ally Kadyrov reportedly organized in the center of Jalal-Abad rally, which was attended by about 500 supporters. However, local police made fun of by the declared opposition figures, stating that gathered a total of about 50 people. On the same day on state television showed a report, which also ridiculed as Assanova has lost influence and is unable to collect a significant number of supporters.

Even if you dismiss Asanova and Kadyrov’s side, calling them politicians losers, Turgunalieva things more complicated. Authority Turgunalieva associated with his participation in political protests on 6 April 2010 in the city of Talas, which ended with the overthrow on the following day, President Kurmanbek Bakiyev. “Apriltsi”, as in Kyrgyzstan is often called the organizers of the revolution, enjoyed special respect among parts of the Kyrgyz society, and Atambayev has repeatedly attempted to use their moral capital.

But in early March 2016 Turgunaliev recorded a video message in which he accused the state of reneging given to them after the events of 2010 promises.

“I’m not afraid of death. I spoke out against Bakiev’s and started a revolution in Talas. If you want to kill me, I’m ready. I have already dug your own grave, told Turgunaliev, standing in the middle of the cemetery in his hometown. — Today, remained in power only corrupt officials and parasites. If this is not the end, it all ends badly for those in power”.

Critics Turgunaliev stated that he had no authority and just trying to get a lucrative position in government.

Fate Asanova and Kadyrov in a few days suffered two other opposition leaders: the national security Committee detained the expert in the field of energy Ernest Karybekova and public figure of the Dastan Sarygulov.

Re-arrest of opposition occurred after the publication in the Internet phone records Sarygulov, Karybekova, and several others.

Sarygulov acknowledged the conversation but said that the recording was distorted and mounted. And Sarybekov expressed confidence that the arrest was connected with his professional activities.

“For more than 10 years I’m opposed to energomedia and the government on anti-national, criminal their activities. All corruption “roof” of the political establishment of the country. In his last speeches, I began to be called specific names. So now in custody,” said Karabekov in his appeal from the remand prison of the SCNS.

In may of the same year the national security Committee arrested a new batch of opposition. At this time imprisoned members of the so-called people’s Parliament, including former Minister of agriculture Bekbolat Talgarbekov, former Finance Minister Marat Sultanov, a former presidential candidate Taraba Kolubaeva and Alexander Gusev and Toigonbek Kalmatov.

All happened again the same scenario: first, in the Internet appeared the recording of their telephone conversations with full text transcript and the numbers of those who called or who made calls, and then arrests occurred. All participated in the conversation previously, “distinguished” by the fact that Atambayev urged to resign.

The authorities immediately accused them of planning to seize power.

The trials of detained opposition leaders held behind closed doors. Verdicts are expected from week to week. Specific details were not publicly disclosed, but it is known that Prosecutor’s office demands to sentence defendants to terms ranging from 12 to 22 years.

According to Zulfiya Marat of the Committee for defense of political prisoners, the arrest Tekebayev has revived interest in the fate of the detained politicians.

“This was the first stage of persecution of the opposition, and then second, when you persecute those who had parliamentary immunity, and the third is now in relation to the media. It’s all preparation for the next phase when any will assume that any criticism he will be severely punished,” she said EurasiaNet.org.

The head of Committee of protection of freedom of speech Adil Turdukulov also believes that the authorities ‘ actions were systematic, and the police help them in the suppression of freedoms. “The national security Committee became the organ of repression,” he said.

Atambayev is limited to one presidential term, but there are suspicions that he is trying to help hand over the reins to their ‘people’ to the authorities have the people around him. Although the future President in any case will be forced to undergo the procedure of elections, it is believed that the use of administrative resources will allow to put in the presidential chair presidential appointee.

According to Turdukulov, Atambayev is trying to “clear the political field” and actions of the opposition to prevent the authorities of the so-called “operation Successor”.

“All of this prevented the scenario of the state, and to it remained nothing how to close the mouth of the leader of “ATA-Meken” by the arrest, on largely trumped-up reason,” said Turdukulov.

The President Atambayev does not hide his contempt for critics. Members of the National Parliament he called “democracy” who are practicing foreign grants.

“I am the head of state, I want to openly warn: now all attempts to destabilize the country will be severely suppressed and severely punished in accordance with the law. More concessions will not help anyone”, he said.