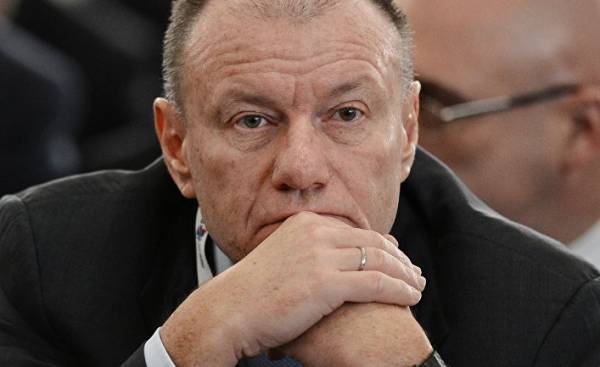 Vladimir Potanin, the eighth richest oligarchs of Russia (Forbes estimates his fortune at $ 14 billion), usually do not talk about politics and rarely gives interviews. The head of the Interros holding company actively engaged in the modernization of the company “Norilsk Nickel”. After the transfer of 250 works of contemporary Russian art as a gift to the Centre Pompidou he was recently awarded the Legion of honor.

Les Echos: are You in favor of economic reforms in Russia. You say this directly to Vladimir Putin?

Vladimir Potanin: We are familiar with in the 1990s when he worked in the St. Petersburg mayor’s office. He knows how to listen. At the meetings it is always possible to Express concerns and opinions. But the President does not like public debates, has not yet been considered and no decision has been made. Now in the Kremlin seriously ponder a future economic program. Alexei Kudrin defends a consistent and neopopulists line. Like the leaders of the best sports teams, he is a world-class player, who is able to generate positive momentum. Regardless of his position, he will be a significant force in the Putin’s team.

— Russia is recovering from the economic crisis?

— This year, no doubt, will be 1% growth. Anyway, to truly exit the crisis and to solve our problems, it would take a few years of 3-4% growth. This will be possible to reach in two or three years. This requires higher oil prices, as well as reducing bureaucracy, easing regulations on businesses, lower rates, and new infrastructure. You need every day to strive to move forward, like athletes in training. The country is moving in the right direction, but not too fast.

— No. “Norilsk Nickel” has remained access to the financial market abroad. We maintain good relations with Western partners and clients like BASF. Sanctions on technology transfer also do not apply in our sector. Anyway, these measures have a negative impact both on Russia and on those who received them. Although there was in them also a positive moment: we more orientirueshsya Asian partners. State support is allowed to rise to a number of industries like agriculture, but without competition, consumers lose, in terms of quality and price. In addition, because of the sanctions, some enterprises are unable to carry out a number of necessary investments.

— The crisis has given a chance for economic reform?

— The crisis has helped to reduce imports and strengthen domestic production. In addition, he gave a chance to improve the management structure of our country. There is progress, but I would not say that these opportunities to full advantage. I was hoping for a big change, especially in bureaucratic obstacles. Need faster reform. The weight of the state in the economy should be reduced as the control. State presence in the economy has increased since 2000. The crisis has reinforced this trend. The fact that he and the sanctions became much harder position of the enterprises that ask from the government more help and resources.

— Why in this period of political tension you have decided to Finance an exhibition in the Centre Pompidou in Paris?

— I wanted to hold an exhibition in Paris. As a student I started to learn French and continue still, including when you see your great classic movies. I regularly go to France and never felt there anti-Russian sentiment. Now political relations between our countries leave much to be desired. It is in a period of tension, culture, sport and education should come to the fore. The fact that we are talking about fundamental and long-term relationships. The image of Russia in France and France in Russia is associated first and foremost with what people see in the media. Personally, I like to read Newspapers, which deal primarily with politics. Culture offers great potential.